For 24/7 overclocking, we used our hotel-room system to get a good shot at how the Core i7-8086K performs on a closed loop liquid cooler going through the multipliers one-by-one. For this we used a variation of our standard overclocking technique.

Due to timing and location, our overclocking method was as follows.

Blender was a good mix of hardcore CPU load, memory accesses, and as a result, power draw. Any issues that required additional voltage for stability and coherency were found relatively quickly after starting the test.

The Blender test lasts around five minutes on the Core i7-8086K, which for our quick overclock testing is sufficient. For users who insist on 24/7 rock solid stability, it isn’t the test that you might like to see, however it still marks a good attack on the system.

Using this methodology, we achieved the following results: 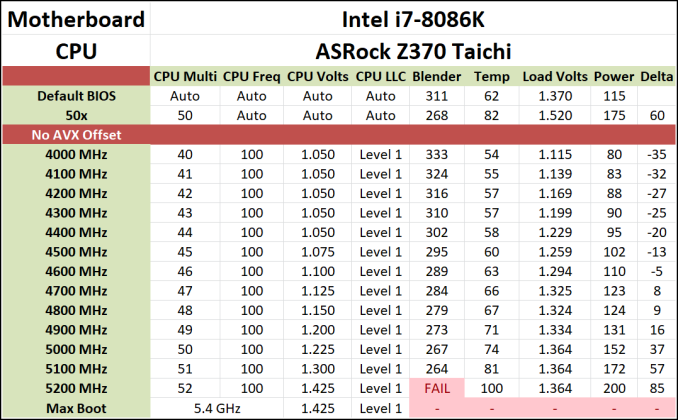 At default, our system would hit an all-core turbo of 4.3 GHz and scored 311 seconds on Blender, with the CPU at 62 degrees C and consuming 115 W. We also tested the system ‘at auto’ but with the CPU set to 5.0 GHz on all cores. This gave a Blender score of 268 seconds, but much higher temperatures (82 C) and power consumption (175 W).

When going up from 4.0 GHz manually, we can see that there is a disconnect in how the power is reported in the OS: AIDA64 reported a voltage that slowly increased as the multiplier increased, even if the voltage setting in the BIOS did not change. It also showed to hit a wall at 1.364 volts, even when adjusting the voltage in the BIOS helped with the higher multipliers. This was odd, but I think the poignant results here are Blender, Temperature, and Power.

I’m going to adjust the Blender results in to ‘renders per hour’, which is easier to visualize in a graph. 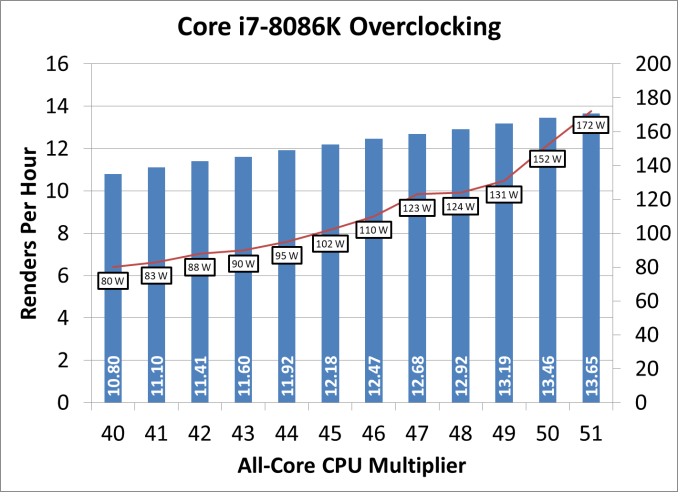 The key result here is going to be 5.0 GHz, which is a nice medium for power and performance but also temperatures and voltage. At this level, the system gives +16% performance for an additional +16% frequency. The problem though is the power.

Comparing a 5.0 GHz manual overclock to the ‘stock’ operation of the processor shows a 32% increase in power. But when compared to an equivalent 4.3 GHz manual overclock, the power gain is now a whopping +68%. We really are stretching the microarchitectural design at this stage.

What should be noted is that at default, the system drew 115W, which is 20W above TDP. As mentioned before, TDP is defined at base frequency, which is in this case 4.0 GHz. We saw a power consumption of 80 W at the base frequency, showing that the processor is still technically under that TDP value, at least when the user optimizes the voltage.  At a 95W level, if we were maximizing frequency for the TDP, we should have seen a base frequency of 4.4 GHz with this chip.

However, consider what might have been if Intel had decided to increase the TDP by +10W or +15W, up to 110W. In that case, we could have been playing with a chip that had a base frequency of around 4.6 GHz, depending on how other chips perform. As we will see in the results over the next few pages, Intel really did miss a trick here by not going down an increased TDP route.

For anyone interested about the upper limits of our chip, 5.1 GHz was the realistic maximum. I could not get 5.2 GHz to be stable with Blender for more than about 30 seconds without it throwing an error, and as the voltage in the BIOS rose up to 1.425 volts, the system was showing peak temperatures at 100C, well beyond a comfortable limit. Speaking with Alva and his nice chip, he stated that with a delid, 5.2 GHz should be possible, although beyond that might be a bit tough given how quickly the voltage seems to ramp in our sample.

As for absolute maximum that we could load into Windows with, I was able to see 5.4 GHz. No load was applied for fear of the temperatures, and 5.5 GHz did not want to play ball.

As part of our testing, we were able to run through a few benchmarks at both a high overclock and fast memory (and we tried both). Again, many thanks to ASRock again for the system for the system loan.