One of the big questions surrounding the new CPU is if Intel has decided to make changes to the way the CPU and the heatspreader make contact. The best way to make contact is to use an Indium-Tin solder, or a liquid metal, to ensure that the thermal load from the CPU is taken directly to the CPU cooler. The cheaper method (but more reliable method) is with a thermal paste, which is more resilient to thermal expansion coefficients over the lifecycle of the processor. In a perfect world, we'd expect the highest performance processors to use the solder method while cheaper processors can use a thermal paste. However Intel has been making its processors solely with thermal paste of late, causing extreme enthusiasts to resort to delidding and adjusting the thermal paste with liquid metal. AMD uses thermal paste in its APUs, and we did a delidding guide a few weeks back:

The Intel method is mostly similar. However, the question for this review was if Intel would change from a thermal paste as used on the Core i7-8700K to a more overclocking and thermally friendly solder for the Core i7-8086K. The idea is that if Intel is geared towards enthusiasts, solder should be used, right?

For this page, we are extremely thankful to Alva Jonathan, aka ‘Lucky_n00b’, a fellow overclocker and journalist for Jagat Review. I'm known Alva for almost 10 years, and like me, he also purchased his Core i7-8086K during Computex this week, except he went the full beans with delidding and liquid nitrogen. He is allowing us to share his results with our audience, so a big thank you to Alva! 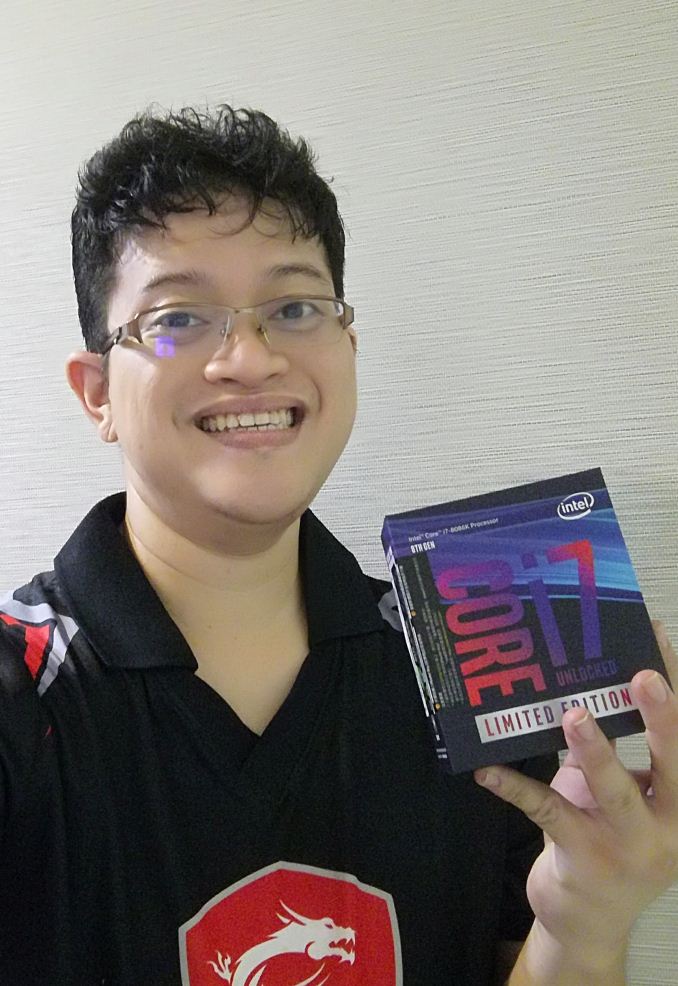 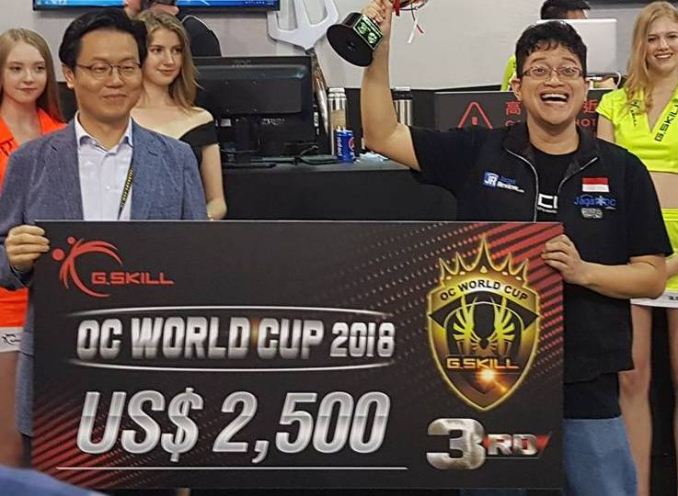 Alva does some impressive overclocking coverage on all the new platforms at Jagat Review (in Indonesian), as well as doing exceeding well at overclocking competitions around the world. This week he scored third place at G.Skill’s live overclocking event at Computex, scoring some nice hardware and a cash prize.

Alva’s Core i7-8086K OC and analysis can be found here (in Indonesian).

Opening Up The Chip

Suffice to say, Intel made zero changes to the thermal interface on the Core i7-8086K. It is completely identical to the Core i7-8700K, using the same thermal goop as in previous generations of chips. For current Coffee Lake processors, removing the thermal goop and replacing it with a liquid metal implementation is generally good for lowering temperatures from 5-15C (depending on the quality of the application) or gaining another 100-300 MHz depending on the voltage response of the chip. 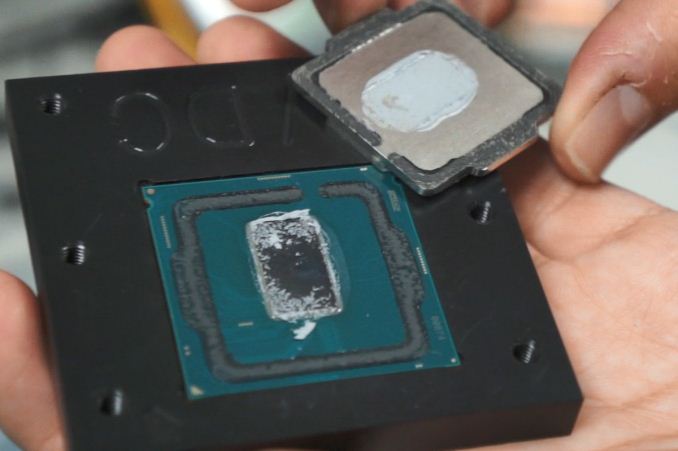 Alva recommends only delidding the processor for more frequency or better thermals if you intended to use more than 1.30 volts through the CPU. At this voltage, with a good ambient cooler, users will start to hit around 80 C when running the CPU at full load (we can confirm, our sample was similar), which is a good point for anyone considering a delid. 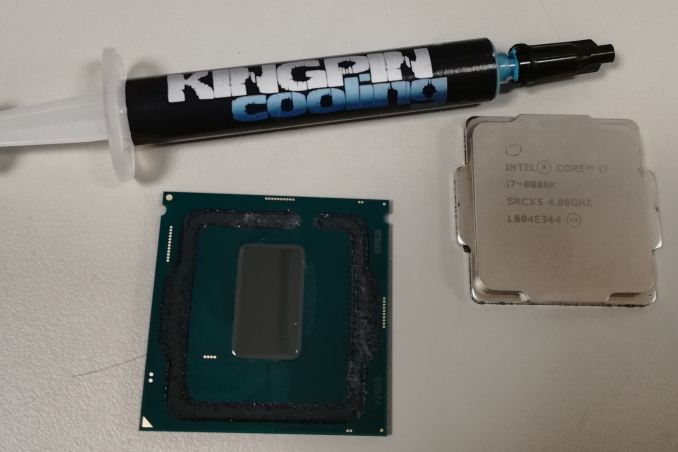 With his CPU, Alva achieved 5.0 GHz at 1.20 volts, which was stable enough to run CineBench R15 for a score of 1627 (compared to 1424 at stock with fast memory). The CPU also managed 5.2 GHz at 1.35 volts for a few more points at 1692. He used KingpinCooling KPX as the replacement thermal interface material.

Going Beyond with Liquid Nitrogen (LN2)

Extreme overclocking is an interesting pastime to participate in, however for the users on the extreme edge of the sport, every MHz counts. Not only for cooling but systems are physically modified to add better power delivery or to adjust voltages manually rather than through software. For those that can, it creates a thrill or two. 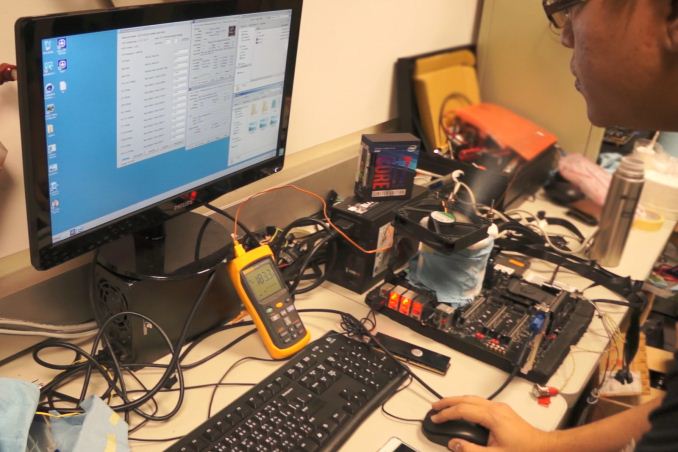 In Alva’s testing notes, he started with MSI’s Z370 Godlike Gaming motherboard prepped for sub-zero cooling, and used a heavy LN2 copper pot to manage temperatures with the liquid nitrogen. After bring the system down to -100C, he booted with BIOS settings such that the CPU was at 6.0 GHz (60x100), with an uncore of 5.0 GHz and a CPU voltage of 1.70 volts. Don’t try this without sub-zero cooling (!). Other voltages were as follows:

After booting into the OS, MSI Command Center Lite was used to adjust the processor variables (multiplier, base clock, voltage) in real time. The system was cooled down further to its limit, known as ‘full-pot’ liquid nitrogen benchmarking, and the multiplier was raised to find the absolute processor frequency limit for a no-holds barred validation. 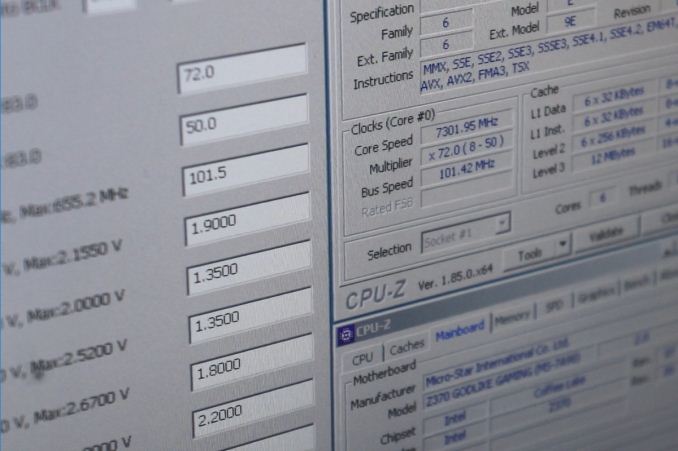 In general, Skylake-based processors tend to see peak liquid nitrogen frequencies around 7.1-7.4 GHz, so this new processor is nothing out of the ordinary. Alva said that he was quite happy with this single chip, however he will need to test a few more to see exactly where if there is variation in the wafer/batch from Intel. When Alva posts his full sub-zero overclocking article, I will link to it here.