iCloud on the Desktop: A Look at OS X 10.7.2 and iCloud for Windows

iCloud.com is another major piece of the iCloud puzzle. iCloud’s web interface and its associated web apps are a hodgepodge of iOS and OS X design elements - the webmail app is more or less OS X Lion’s Mail.app with iOS Mail’s icons. Pop ups are displayed in iOS-style white-text-on-blue-background boxes. The Contacts web app is likewise a pretty straight port of the Lion version, and the Calendar app is likewise similar. The web interfaces for Contacts and Calendars are, in fact, identical to those that come with Lion Server, though for whatever reason the iCloud web client is much nicer than the bare bones implementation found in Apple’s server OS (I suspect the iCloud webmail client was developed in-house, while Lion Server relies on the open-source Roundcube for webmail and a wide array of other open-source pieces for its backend).

To use the web versions of the iWork apps, you must first install and launch an iCloud-enabled version of either Pages and/or Numbers and/or Keynote - current users of these programs can grab iCloud-enabled updates from the App Store now. Once you've set these programs up to use iCloud, any documents you create in them are automatically stored in iCloud, and can be downloaded from iCloud.com as Pages, Word, or PDF files. You can also upload Pages, Word, and text files for editing on your iCloud-enabled devices (Numbers will let you upload Numbers, Excel, and CSV files, while Keynote lets you upload Keynote, and Powerpoint files).

It's a nice feature, though as with the rest of iCloud a certain amount of vendor lock-in is encouraged - these services work best if you use Pages and Numbers and Keynote for everything, and the fact of the matter is that many people don't. It's still nice as a backup service in case your device is ever lost, damaged, or stolen, but its usefulness as a syncronization service is limited if you use Word on your Mac (because you can) and Pages on your phone (because there isn't much else). Microsoft in particular has little incentive to add iCloud functionality to its Office products, since it's got its own Windows Live cloud functionality to push.
Lastly, Find My iPhone isn't just for iOS anymore: you can now also register your Macs with the geolocation service, though it's limited somewhat by Macs' lack of a cellular connection. You can look up the location of any device you've registered that's on and connected to the internet, and you can send messages to them (along with sounds that play at full volume regardless of the volume setting on the device, for those of you who have just lost your iPhone in the couch), lock their screens, and remotely wipe them in cases where the data on the device is more important than the device itself. You'll also receive an email confirmation when your message or lock or wipe command is received by the device.
For iOS devices, since all iOS 5-supported devices also support hardware encryption, wiping the device and making its data inaccessible is as simple as deleting the encryption key on the device. For Macs, iCloud prompts you for a PIN to use when locking or wiping the Mac, and completely destroys all data on the Macs hard drive when wiping. In either case, you must input the pin when you recover the Mac before you'll be able to use it again (if it has been locked, unlock it and you can see your files again. If you wiped it, it will boot into the Recovery partition and prompt you to reinstall a fresh copy of Lion).
Generally speaking, this service was fairly accurate, though it did sometimes have trouble detecting that my devices were powered on and connected to the Internet even when they were sitting right there on the desk. For a free service, though, it's certainly nice - it gives end users access to features previously confined to enterprise administrators, and it's hard to complain about that.

For Calendars, Reminders, Mail, and Contacts, iCloud for Windows (which works with Vista and 7 - no joy for XP users) basically exists just to make it easy for people to set their iCloud email account up in Outlook 2007 or 2010. Despite requiring Outlook for the syncing of mail, contacts, calendars and tasks, iCloud isn’t using Exchange to do its thing on the Windows side.  It’s using the same hodgepodge of connection types (IMAP, CalDAV, and the rest) to simulate an Exchange-like combination of services, which makes business sense from Apple’s perspective - why use a competitor’s technology in a heavily promoted new product?

To get iCloud set up via Outlook, you’ll need to have an Outlook profile created - you just have to launch Outlook once to do this, and you don’t need to have any accounts configured in the client already. If this has been done, clicking the checkboxes in the control panel will set everything up for you automatically.

You can also sync bookmarks, both with Internet Explorer and Safari for Windows 5.1.1 - clicking Options will allow you to choose between the browsers, provided you have both installed.

Photo Stream is available in Windows, which is a nice touch, even if it isn’t as seamless as in its OS X/iOS implementation. By default, it creates a Photo Stream folder in your My Pictures folder. In that folder, there are two additional folders - one for downloading of pictures that are already in your Photo Stream, and one for uploading new pictures into Photo Stream from your PC. 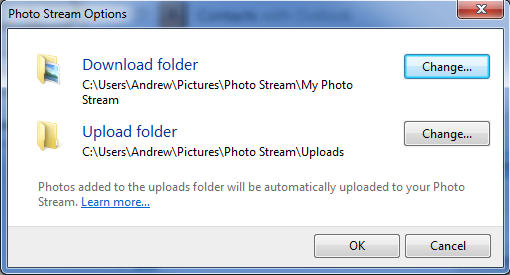 The iCloud control panel, like the preference pane in OS X, will also show you how much storage space each of your devices is taking up, and allows you to purchase more of it if you need it. 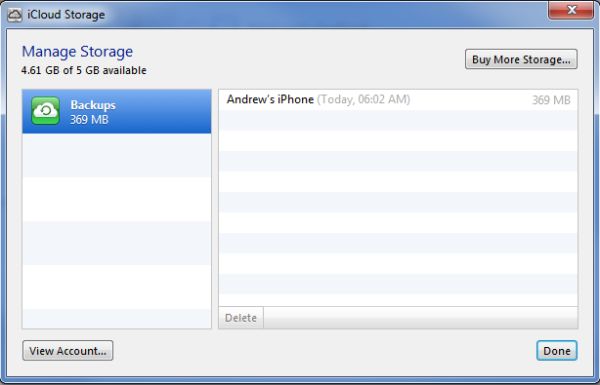 The functionality that gives iCloud a lot of utility for OS X and iOS users - Find My Device, automated backups, Documents in the Cloud, Find My Mac - is unsurprisingly absent for Windows users. It’s nice to have what’s here if you have a PC or two nestled in with a predominantly Apple-centric ecosystem, but people without other iOS or OS X devices probably don’t need anything that’s being offered here. I’m already using Gmail at home, Exchange at work, and Chrome to sync bookmarks everywhere, so for me iCloud for Windows functions mostly to sync photos between my devices (something I could already have done, albeit with a bit more effort, via Dropbox or a similar service).

iCloud is trying to do two things: the first is to supply a top-to-bottom solution for email, calendars, contacts, pictures - all aspects of many peoples’ digital lives. The trouble is that for many of its most basic services, widely-used alternatives already exist.

The second thing iCloud is trying to do - visible particularly through Documents in the Cloud, iTunes in the Cloud, and Photo Stream - is to serve as the connective tissue between all of your many devices (as long as your devices aren't running, say, Android, or some flavor of Linux). It's generally more useful on this account (Photo Stream is very easy to get used to if you're in the habit of taking a lot of pictures or screenshots), but it won't be as useful as it could be unless developers begin updating their apps to take advantage of iCloud's APIs. The trouble here is that some of those developers (Microsoft chief among them) have their own cloud services to push. Only time will tell how popular iCloud will become among third parties.

None of this is to say that iCloud won’t be a success, or at least more of a success than MobileMe ever was. The services lost in the transition from MobileMe to iCloud (iDisk and iWeb publishing among them) are mostly replaceable, it’s now free of charge and, critically, it brings reasonably sophisticated services to people who previously might not have bothered to set them up: synchronizing mail, calendars, contacts, photos, documents and the rest between several different devices is now something a casual user can do without too much effort.

Whether iCloud succeeds in the long run depends largely on whether those novice users (and developers) take advantage of its features, and on the service’s reliability once it’s handling data syncing and data backup for millions of Macs and iOS devices.
iCloud on OS X
Tweet
PRINT THIS ARTICLE
POST A COMMENT