The OnePlus 2 uses Qualcomm's Snapdragon 810 SoC. At this point we've seen Snapdragon 810 in a number of devices and have an idea of what to expect. That being said, we've seen that performance can vary based on the device it's implemented in due to cooling and other factors like the CPU governor. On top of that, in many situations a device's performance is heavily dependent on the quality of its software in addition to the processing power of its SoC. For those reasons it's important to run the OnePlus 2 through our standard suite of web and native benchmarks in order to gauge its performance relative to other Snapdragon 810 smartphones, and the rest of the smartphone market as a whole. 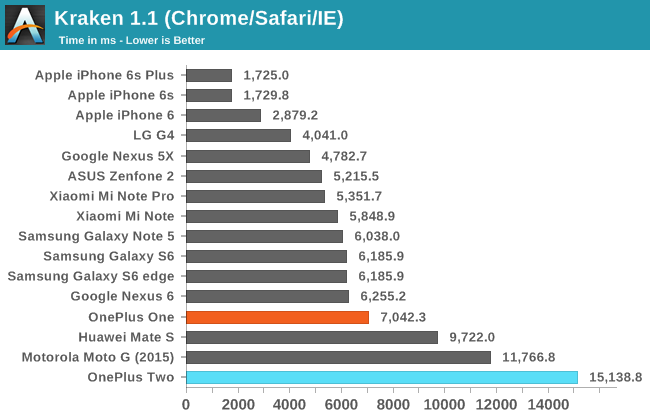 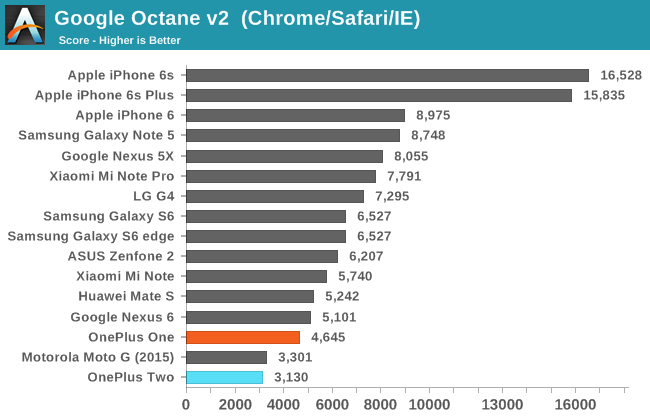 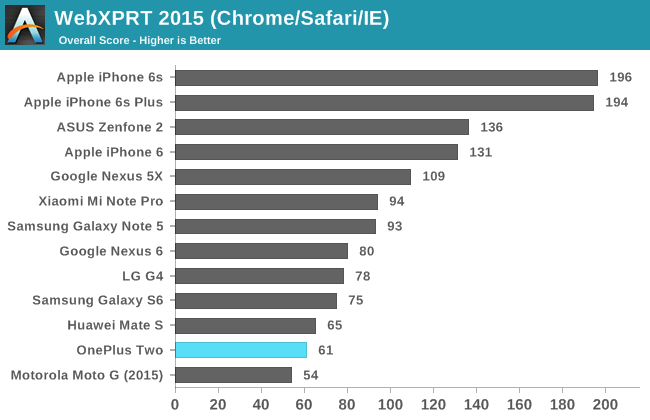 When I saw the web performance results from the OnePlus 2 I assumed there had been some sort of error, so I decided to completely reset the phone and run them again. Unfortunately, these results are not erroneous. You may have noticed that they bear a remarkable similarity to the results from the Moto G (2015). After looking at the CPU activity during web browsing I realized that this isn't really surprising, because the OnePlus 2 simply does not use any of its Cortex A57 cores during web browsing. This means that you're really getting a quad core Cortex A53 CPU, and with JavaScript being heavily bound by the performance of a single core it's no wonder that the results are close to those of the Moto G (2015) which uses a quad core 1.4GHz Cortex A53 CPU.

I don't really want to retread the Snapdragon 808 and 810 topic, but it's really worth noting that this is the worst implementation of the SoC I've seen to date. It's worth noting that this doesn't say anything about the length of time the A57 cores can run for when they do actually get used, but it shows that they're not getting used in circumstances where they should be: bursty workloads where the full performance of the CPU is needed for a short period of time to improve the user experience. It's especially concerning because OnePlus was making a great deal of noise about their work to manage thermals on Snapdragon 810. I personally don't think simply not using the big cores on an SoC constitutes properly managing its temperature, and the poor JavaScript performance truly does make browsing the web feel like using a slower and much less expensive phone like the Moto G.

There has been some concern online that these web browsing results may be inaccurate. The evidence to the contrary has been in the form of results from other reviews, results using other ROMs or kernels, or using other web browsers. To clarify, these scores were achieved using the latest version of Oxygen OS for the OnePlus 2, which is 2.1.2, in the latest version of Google Chrome. The reason for the scores is that OnePlus is specifically detecting whether or not Chrome is the active application, and if that is the case they unplug all of the Cortex A57 cores, regardless of the load being placed by both Chrome and background applications. Below I have embedded a video that demonstrates this behavior.

In this circumstance I launched a CPU load virus with 4 threads in order to cause Snapdragon 810's Cortex A57 cores to reach peak clocks. CPU4 through CPU7 represent the Cortex A57 cores, while CPU0 and CPU1 are two of the Cortex A53 cores, with the other two tracking at the same frequencies but not being shown on screen in order to accommodate my fingers. You can obviously see the clocks of the A57 cores dropping as heat becomes an issue, but that's not really the focus here. What is the focus is how all four cores shut off the moment Chrome is opened. This is clear evidence that OnePlus has hard coded this behavior. Whether or not it was introduced in more recent releases of Oxygen OS is hard to say, but given that users report achieving greater scores a few months ago this is very possible. It's also important to note that this behavior only affects Chrome, and results from the Chrome Dev or Chrome Beta channels are unaffected.

While the OnePlus Two is technically capable of faster browser performance, the performance users will actually see using the only browser included on the device is reflected accurately in the results we have published, and not at all accurately by any results other users are achieving with different kernels that modify the CPU behavior, or different releases of Chrome that aren't detected by OnePlus's software. With that in mind, I see no reason to alter the results that have been published, as they accurately characterize the JavaScript performance that most OnePlus Two users will experience. 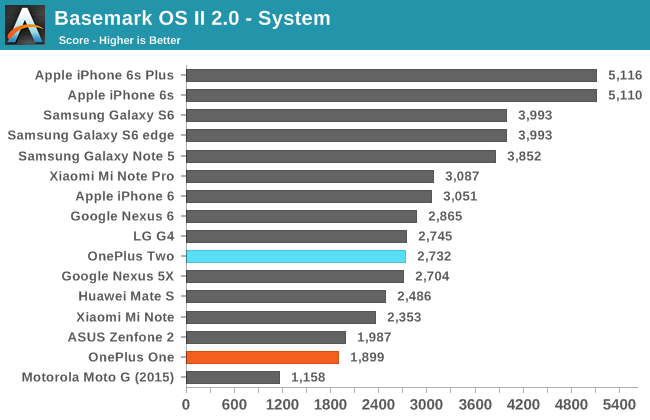 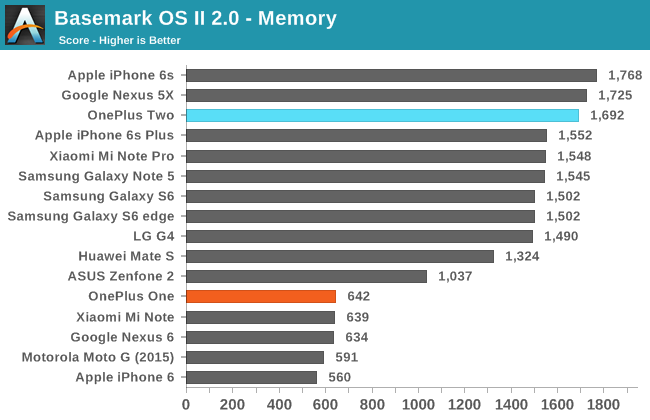 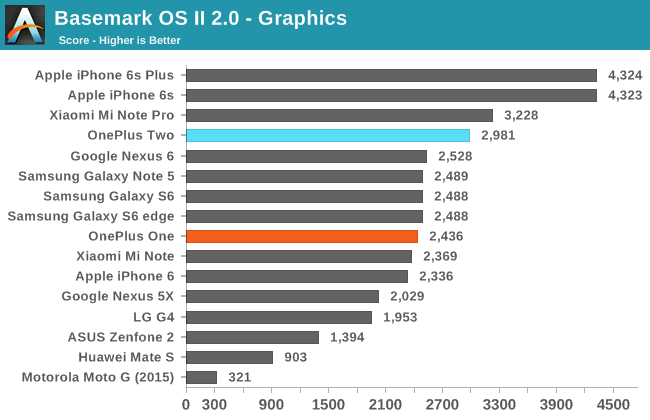 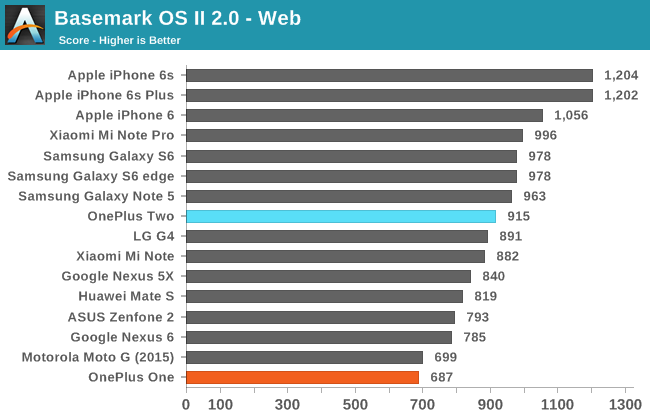 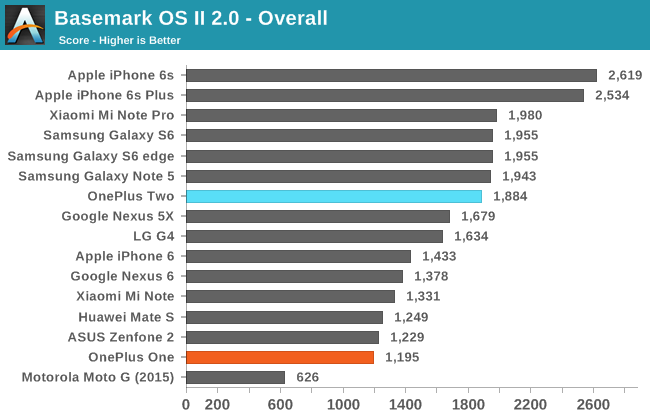 BaseMark OS II is a case where the Cortex A57 cores on the OnePlus 2 actually see some use, which translates into higher relative scores than what was achieved in browser testing. Improved scores in the graphics and NAND memory tests help make the overall score significantly higher than the OnePlus One. It's worth noting that the use of the Cortex A57 cores means that the BaseMark results may not be exactly representative of how the phone will actually perform in general use. For example, in this case the Cortex A57 cores are in use during the web test, while in general they never get used at all during web browsing, and in more intensive situations the best case is that there are two A57 cores in use at some frequency and the other two are shut off. 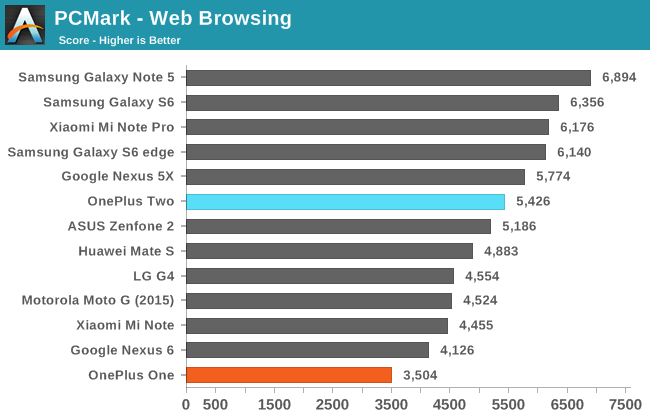 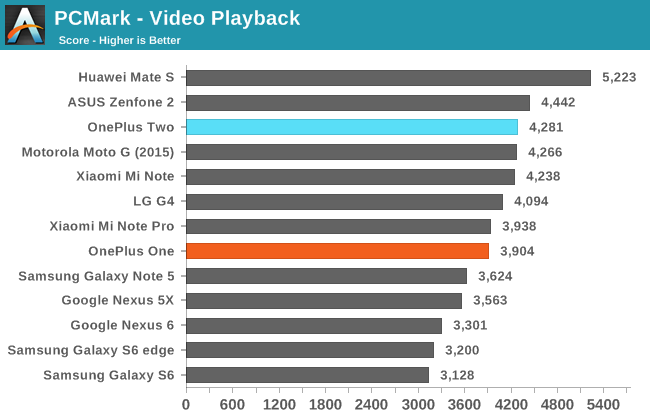 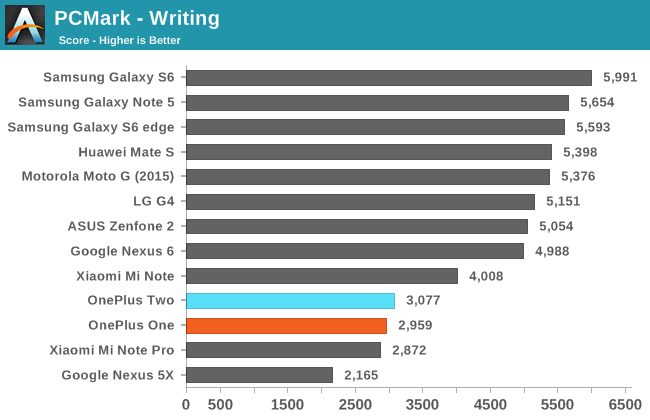 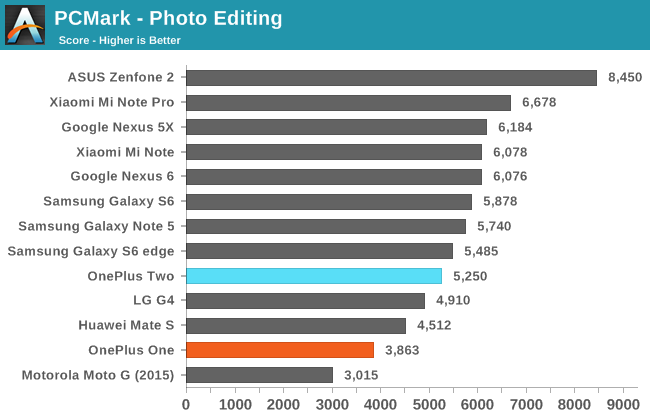 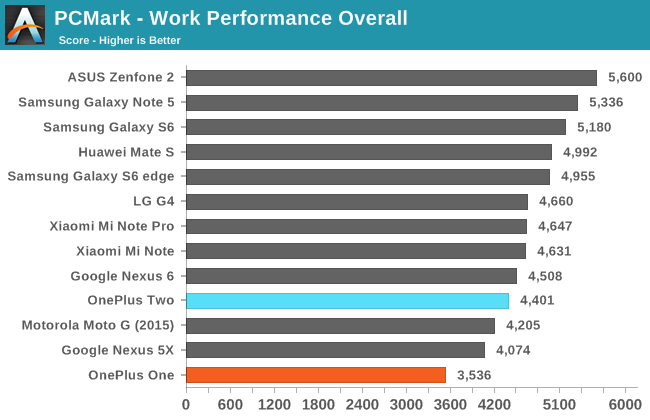 In PCMark the OnePlus 2 again does better in the web tests due to the fact that the A57 cores actually switch on, but falls behind in the photo editing test and even more so in the writing test. The writing test is actually a fairly good indicator of CPU performance, because it involves decompressing text files, moving text from one file to another, adding text and images, and then saving them to disk. During that entire period the A57 cores are not triggered at all, which contributes to the low score. Even with that, it's not exactly clear to me what additional factors make the Snapdragon 808 and 810 devices all perform so poorly here compared to a device like the Moto G which just has 4 Cortex A53 cores. It could very well be the result of issues with ART, or other problems with frequency scaling on the A53 cluster. In any case, like all Snapdragon 808 and 810 devices, the OnePlus 2 struggles in the aspects of the test that heavily tax the CPU.

The issues with Snapdragon 808 and 810 have led to many issues with CPU performance this year across a number of Android phones. However, OnePlus is the only company I can remember publicly stating that they had worked to overcome these issues, and the fact that the OnePlus 2 falls so far behind other 808 and 810 devices in the web browsing puts a lot of doubt in the validity of those remarks. It's pretty safe to say that if you care about CPU performance you're much better off with the OnePlus One or OnePlus X, both of which use Snapdragon 801, and if you're thinking about buying the OnePlus 2 you really need to take the performance issues into consideration because they're on a different scale than those on other recent smartphones. At $400 there's a lot of competition, and the CPU and JavaScript performance on the OnePlus 2 just doesn't measure up.