The performance of Pixel phones has historically always been quite excellent due to Google’s focus on providing an optimised software stack on top of the provided hardware. For the Pixel 5, this is also the case, and is actually more important than ever given the phone’s not-quite-flagship SoC specifications. We’ve seen other Snapdragon 765 throughout last year – some were good, but others didn’t quite feel as responsive, so let’s see how the Pixel 5 fares. 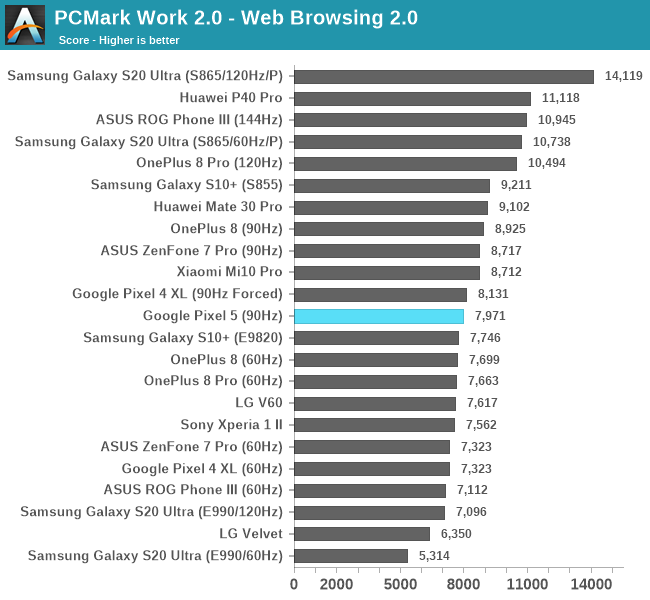 We’re starting off with PCMark’s web browsing test. In general, this test is more about a phone capability to maintain smooth animations without frame-drops, as most devices nowadays are frame-rate limited and bunch together in the charts depending on their refresh rates, with a few exceptions of some devices which have aggressive DVFS and scheduler settings.

The Pixel 5 here does well and ends up in the middle of the pack. It’s actually a good showing and doesn’t reveal that the phone has weaker hardware as some other Snapdragon 865 phones perform quite similarly. 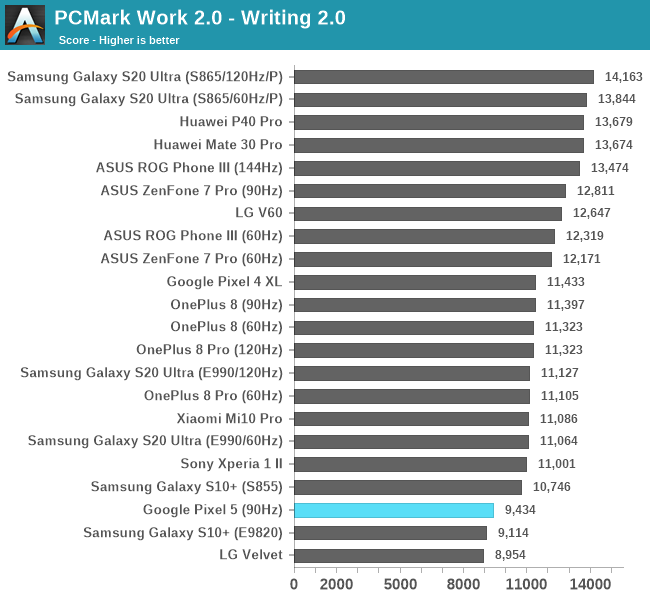 The writing sub-test here does however showcase that the Pixel 5 uses inferior hardware. The test is amongst the most important in the PCMark suite as it has more heavy workloads which are more representative of general device performance and responsiveness. The Pixel 5 performs similar to the LG Velvet, which doesn’t come as a surprise as both have the same SoC. This is notable below the pack of flagship SoC devices out there. 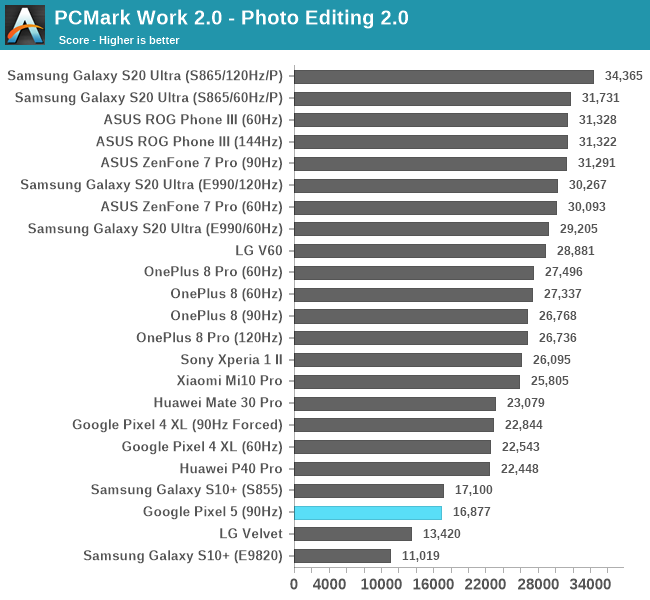 The photo editing test is accelerated via Renderscript libraries, and the weaker GPU of the Snapdragon 765 also comes into play as it doesn’t have the computational throughput of its bigger siblings. 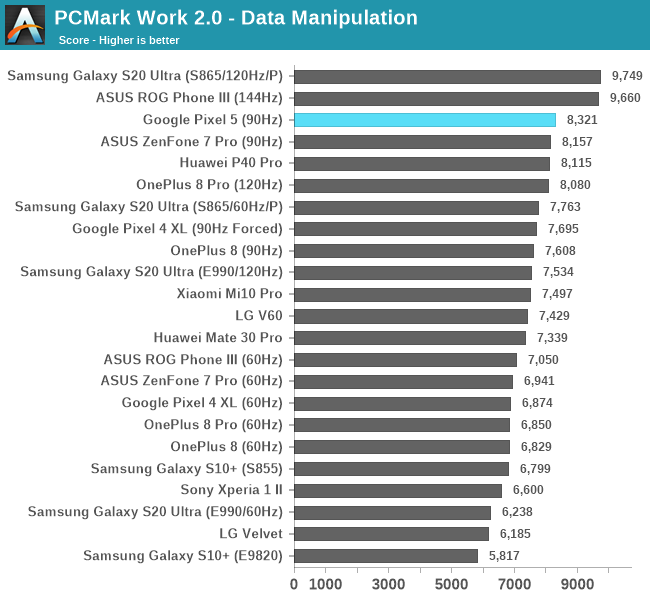 The data manipulation test is heavily animation bound and has a large single-thread component. We’ve seen this test to be quite sensitive to the way the CPUs are scheduling things around and some devices perform better in the test depending on their software tuning of the scheduler and DVFS algorithms. The Pixel 5 actually fares very well here, which is no surprise given Google’s attention to detail of such things. 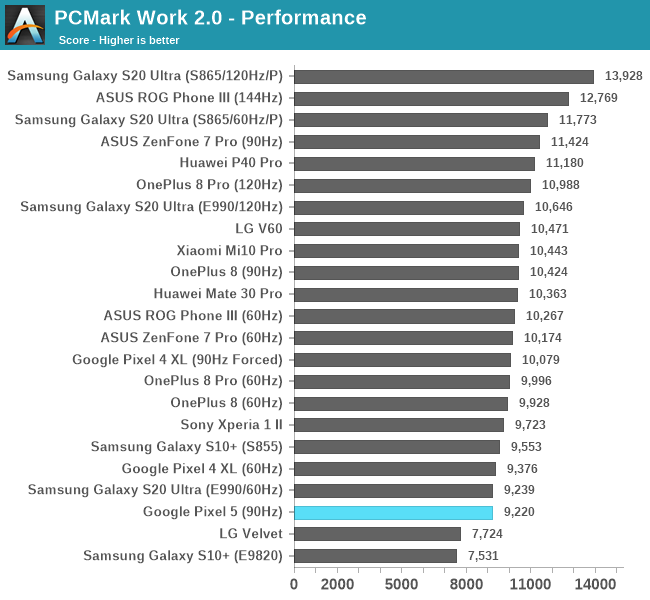 In the overall performance score of PCMark, the Pixel 5 fares adequately, and actually quite ahead of the LG Velvet, thanks to its better software tuning, but does fall behind flagship competition, including last year’s Pixel 4. 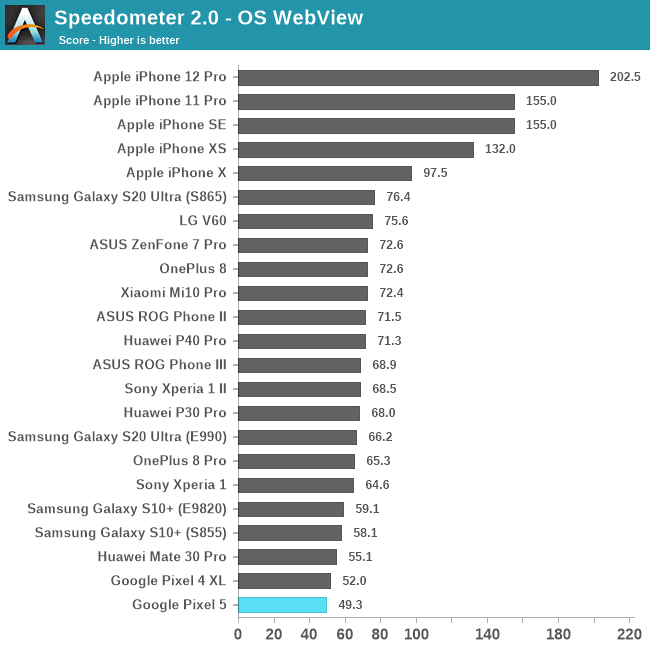 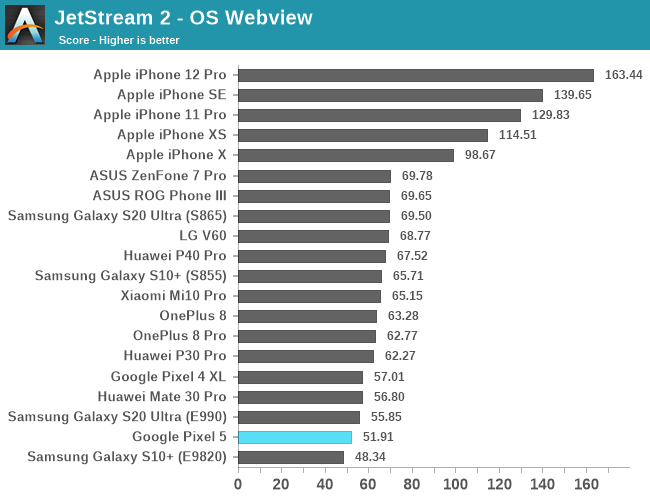 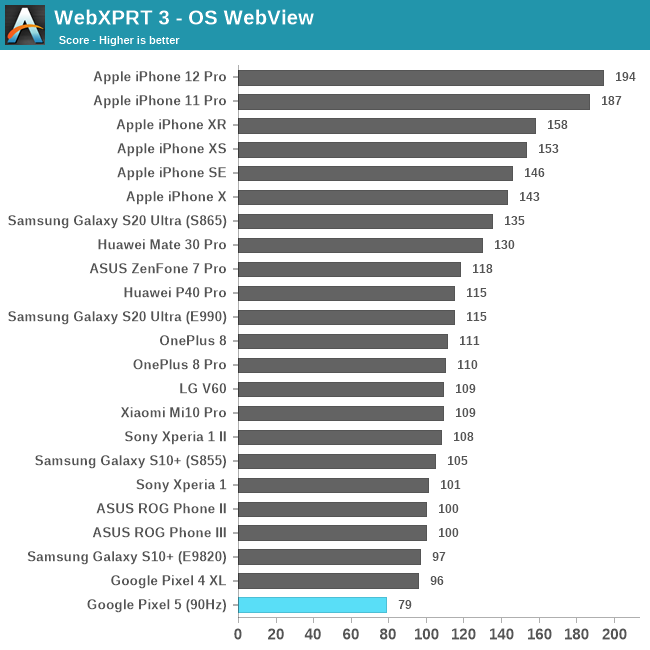 In the web-browsing tests, including both the JavaScript workloads as well as the more general purpose WebXPRT, the Pixel 5 falls to the bottom of the charts. This is unfortunately just a hardware disadvantage of the rather weaker CPUs of the Snapdragon 765.

Overall, in subjective device experience, the Pixel 5 still remains a very snappy and responsive phone. There’s a bit of a contradiction here as how to describe the phone – on one hand, Google’s excellent software tuning means that there’s very little lag for the phone, however the device’s lack of more computational power does however show up if you’re doing any heavier workloads, and here, it does become noticeable that it’s not as powerful as other devices which employ flagship SoCs.

The most interesting comparison here is against the Pixel 4 with the Snapdragon 855 – the predecessor device many times actually does outperform and feels more performant than the newer Pixel 5, a reminder that there is quite a difference in this year’s new product category that Google is aiming the phone at.