As luck would have it, we ran in to a bit of a snafu yesterday morning when wrapping up our test of the 5450. As we stated in our intro, the DDR3 Radeon 5450 is supposed to be clocked at 650MHz core and 800MHz memory, but that’s not what we got. Internally AMD has been sampling a 650MHz/900MHz card for one of the OEMs they work with, and a few of those samples made it out with the 650MHz/800MHz review samples for the press. As one of the (un)lucky winners, we received a 650MHz/900MHz sample, meaning our card isn’t quite a reference card. Thankfully we have more than one 5450 and we were able to benchmark a stock-clocked Sapphire card, but keep in mind a proper built-to-reference card is going to be equipped with slightly different RAM than our sample is. Besides the RAM chips, everything else about our sample is the same as a reference card. 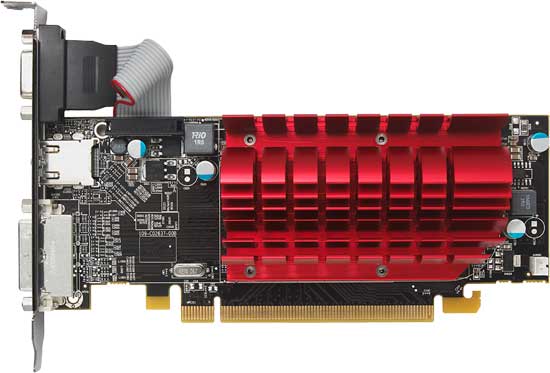 With that out of the way, the 5450 is intended to be a replacement for both the Radeon 4350 and the Radeon 4550. The former was AMD’s previous low-profile card, while the latter was the DDR3 equipped version. Thus we have something similar in size and power usage as the 4350, but packing the “complete” abilities of the chip like 4550.

The 5450 AMD is sampling is the 512MB DDR3 version, for which the reference clocks are 650MHz core, 800MHz (1600MHz data rate) memory, and a 64bit bus giving it 12.8GB/sec of memory bandwidth. There will also be 5450s released using DDR2 (which unfortunately will share the 5450 name), and AMD tells us that vendors have the option of equipping their cards with either 512MB or 1GB of memory. So we’re potentially going to see 4 different 5450 configurations, with the possibility of 1-2 more if any vendors go ahead and build 900MHz DDR3 cards for public purchase.

The reference 5450 is a low-profile card, measuring 6.61” long (the same as the 5670). The low 19.1 TDP means that it can be passively cooled, and as such AMD has equipped it with a double-wide heatsink. This differs slightly from the 4350, where the reference card was actively cooled and the vendor cards were almost entirely passively cooled. There is a 2pin fan header near the back of the card to allow active cooling, but we aren’t immediately expecting anyone to go that route.

Anyone hoping to push a bit more out of the 5450 is going to find themselves disappointed when it comes to pure reference cards. AMD has disabled Overdrive by default on these cards, leaving it up to the card vendor to decide if they want to offer it or not. 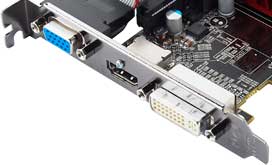 Finally, since the 5450 is a low-profile card, we have yet another variant in the port configuration. Our sample card is equipped with 1 DVI port and 1 DisplayPort directly on the card, and a VGA port on the bracket attached to the card via cable. The 5450 – like all other 5000-series cards – supports 3-monitor Eyefinity, so all 3 ports can be used at once, although the VGA port is obviously going to make it less desirable here.

We should note that only cards with a DisplayPort will support Eyefinity, which means that if a vendor decides to equip the card with an HDMI port instead, they have to give up Eyefinity to do so. We expect to see some cards with HDMI for the HTPC crowd, but at this point we don’t have any idea as to how many there will be. DVI-to-HDMI adaptors still work here, so we may see vendors spend a bit more money and go that route instead.