It should come as little-to-no surprise that Cedar and the Radeon 5450 finally deviate from the rule-of-2 that has marked the difference between the other Evergreen family members. Whereas all of the larger Evergreen chips have effectively been ½ of their bigger sibling, Cedar cuts right to the bone. It’s half as many ROPs as the Redwood-powered Radeon 5670, but 40% of the texturing capacity, and a mere 20% of the shader capacity. As has always been the case for video cards, once you drop below $100 you have to start sacrificing a lot of hardware to meet lower price targets, and Cedar is no different.

For throwing all of those functional units out along with GDDR5 capabilities, Cedar comes in at a slender 292M transistors with a die size of 59mm2.  This is a little less than half the transistor count of Redwood while being a little more than half the die size. In this case the limited reduction in transistor count in spite of the significant reduction in shader capabilities is an excellent example in what makes cutting a design down to budget-levels such a tricky proposition. AMD won’t release a die shot of Cedar (or anything else of Evergreen for that matter) but it’s a safe assumption that most of Cedar is occupied by fixed and semi-fixed units such as the PCIe controller, UVD2.2, and AMD’s fixed function rendering pipeline. AMD can’t scale down any of these units like they can shaders, hence shaders had to take the brunt of the cuts to get a sub-300M transistor chip. 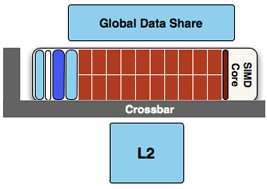 Attached to Cedar is a 64bit memory bus, which as we stated before drops GDDR5 memory support. Instead Cedar will be paired with DDR2 and DDR3 – with today’s launch card being a DDR3 variant clocked at 800MHz. This also makes the 5450 the first card to launch with something other than GDDR5, which has otherwise been paired with everything from the 5970 to the 5670.

Compared to the RV710 chip at the core of the Radeon 4350 and 4550, Cedar and the 5450 are virtually identical to those parts. It has the same number of functional units and the same memory interface running at the same speeds, making it the closest thing yet to a 4000-series card with DX11 + Eyefinity functionality. Cedar is even pin-compatible with RV710, so that manufacturers can drop it in to existing Radeon 4350/4550 designs. And just to put things in perspective, in spite of these similarities Cedar is 50M transistors larger than RV710, which means AMD spent most of their gains from moving to the 40nm process on adding Evergreen family features and getting a slightly smaller chip. This also means that it’s a safe bet that we’ll see AMD double-up on functional units for the next die shrink. 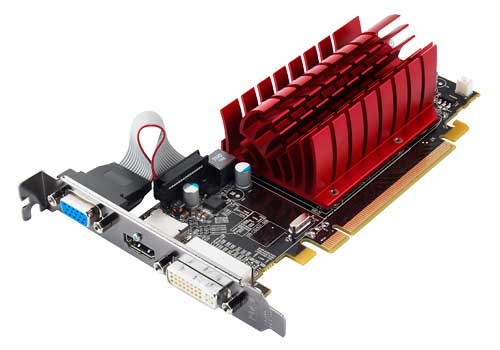 One of the advantages of throwing out so much shader hardware and dropping GDDR5 is that the power usage of the card comes down significantly, playing well in to the low-power nature of budget video cards. AMD specs the 5450 at a mere 19.1W TDP, and an idle power usage of 6.4W. This is more than 2/3rds lower than the 5670. Lower clockspeeds also play a part here, as the 5450 is the lowest clocked 5000-series card yet, at a core clock of 650MHz.

It goes without saying that as a budget card AMD is not targeting hardcore gamers with the 5450, instead the target market is a mix of buyers who need their first real GPU on a tight budget. This means pushing the Radeon 5450’s UVD/HTPC capabilities, Eyefinity, GPGPU acceleration, and it’s significantly improved gaming performance over IGP solutions. AMD is making sure to tag the 5450 as a DX11 card too, but as we’ve already established from our 5670 review, cards this slow are too slow to take advantage of any of DX11’s wonder features – the tessellator is probably going to be the only DX11 feature to see any action on cards of this performance level.

AMD is framing the 5450 as competition for NVIDIA’s bottom-tier GeForce, the GeForce 210. From a power and form factor standpoint this is a good matchup, however the 210 uses an even smaller GPU than Cedar along with DDR2 memory, which means there’s certainly a performance difference but also a pricing difference, since NVIDIA should be able to build the 210 for less. Pricing-wise the 5450 is in competition with the DDR2 GeForce GT 220, the Radeon 4550, and the Radeon 4650, all of which can be found for around the same price if not lower in the case of the 4550.