I’ll go ahead and state it upfront: to my hands, the ThinkPad Edge doesn’t exude the same “hewn from a block of granite” feel as the classic line of ThinkPads. In fact, I don’t even think it feels quite as solid as the literally “machined from a block of aluminum” Apple MacBook Pro. Hardcore ThinkPad nuts have been lamenting that the build quality of the standard ThinkPad line has been slipping ever so slightly with each passing generation since Lenovo took over from IBM. For the most part, they’ve been in the minority, as ThinkPads really haven't changed much and remain the gold standard in build quality and ruggedness for mobile computers. This time, however, it’s different – this time the formula has changed and those ThinkPad fanatics are right.

Most of the traditional elements of a ThinkPad are missing from the Edge. The rubberized black lid, the high-res matte screen, the ThinkLight, the lid latch, the metal hinges, the best mobile keyboard in the business, the blue enter key, the internal magnesium frame, the industrial grade casing, the boxy styling – it’s all gone. Other than the angled ThinkPad logo in the corner, the singular link the Edge shares with the classic ThinkPads is the red TrackPoint located in the center of the keyboard.

With all this said, if you take the ThinkPad glasses off the Edge is a fairly well built CULV machine. It just doesn’t stand out compared to its rivals in the CULV class as a true ThinkPad would. The palm rests are solid and don’t flex, but the LCD lid does twist and exhibits rippling under pressure. The plastics are decent quality, and overall, the Edge should hold up well under mobile use. But don’t expect the kind of longevity a T-series would get you.

The new look is somewhat hard to define; it’s neither as "sleek" as most consumer-centric notebooks, nor as business-functional as the classic ThinkPads and Latitudes. With a matte black lid, palm rest, and bezel, some will definitely feel the Edge has a monotonous design and isn’t particularly attractive. On the other hand, the matte surfaces won't pick up every little fingerprint like the typical consumer laptop. The only real visual interest worth noting is the silver character line along the side; the large LCD bezel also suggests that a 16:10 LCD panel would have been a better match. If you want a business style laptop, the Edge 13 is all well and good, but other than the logo there's nothing else about the Edge that's particularly ThinkPad-like.

If the matte black is too much for you, the alternative on the CULV Edge 13 is a glossy piano black, which is on the other end of the spectrum. As for the aforementioned Heatwave Red, you'll have to go with the AMD model there and lose performance and battery life while saving money and getting a better IGP... and fingerprints will still abound. What's in a name? Depending on your perspective it matters a lot or not at all; the Edge feels more like an IdeaPad than a ThinkPad but let's move on. 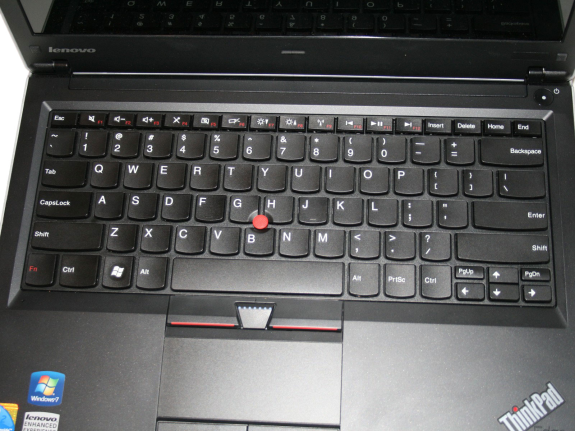 Things begin to look better for the Edge when you start to use it. It won't be mistaken for the old school ThinkPad keyboards, but the new chiclet keyboard does work surprisingly well. It has a good amount of keystroke depth, far more than most other chiclet-style keyboards, and operates smoothly. Unfortunately, and it pains me to say this, there is a slight amount of flex in the center of the keyboard. Flex in a ThinkPad keyboard. Hell froze over twice just now. However, it's a pleasant keyboard to use, and I'd rate it above most if not all other chiclet keyboards with regards to typing experience.

The touchpad is larger than average and works well, which is nice. Lenovo finally seems to be taking touchpads seriously with the ThinkPad line; back in the days of the T42 and T43, the touchpad seemed almost tacked on as an oversight. Thankfully, the TrackPoint remains, in all of its rubber-capped glory. I find that I tend to use the TrackPoint more than the touchpad given the option, but it varies by personal preference. The buttons are very tactile and the center scroll button is a great feature. Hardware scrolling tops the edge of a touchpad any day.

The underside of the Edge has a single panel offering access to the RAM, hard disk, wireless card, and processor. Unfortunately, as in all CULV notebooks, the processor is soldered into the motherboard and cannot be removed. The battery takes up the back portion of the notebook and can be easily swapped out. The 6-cell battery sticks out underneath the system by a half inch, giving the keyboard a mild incline. There is also an available 4-cell battery that remains flush with the system. The hinge can open 180 degrees, which is a feature that many consumer notebooks lack.

The left side of the notebook has one USB port, Ethernet, VGA, and HDMI, while the right side has two USBs, an ExpressCard/34 slot, and a combination headphone/mic jack. Note that the ExpressCard/34 is about the only feature you won't find on competing CULV offerings. I'm a fan of the headset jacks that laptop manufacturer's are starting to use, since they allow use of iPhone headsets. This is a good thing, because the built-in mic located near the keyboard offers poor quality audio. It means that to hold a meaningful Skype conversation, you need to plug in a headset. The webcam works well, offering decent resolution for video chatting. The speakers are located under the front edge of the notebook and have mediocre sound output - enough for YouTube and Hulu, but overall a bit lacking in volume and depth.