The HTC One X for AT&T Review

The next major thing to talk about it HTC’s Sense 4. First off, all of the HTC Ones run Android 4.0.3 as of this writing, which was the first ICS build pushed to the android open source project. It isn’t 4.0.4, but that’s forgivable considering the timeframe involved. Anyhow, Sense is one of those things that traditionally has been a major point of contention for power users. The problem for an OEM crafting a theme or skin is to strike a balance between the native appearance and feel of the underlying base OS, and whatever unique customizations they’re adding. 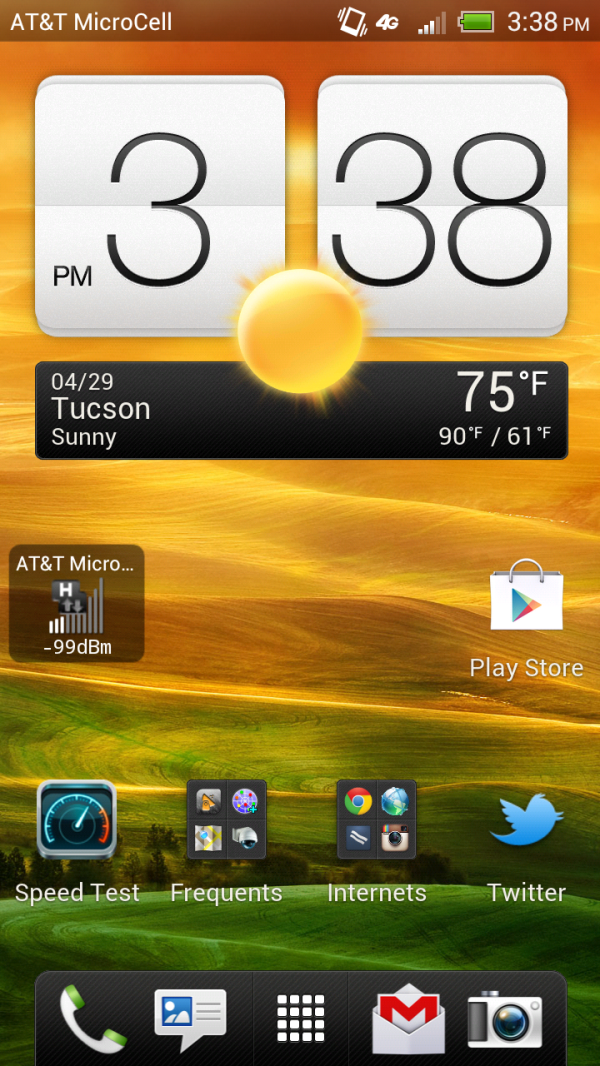 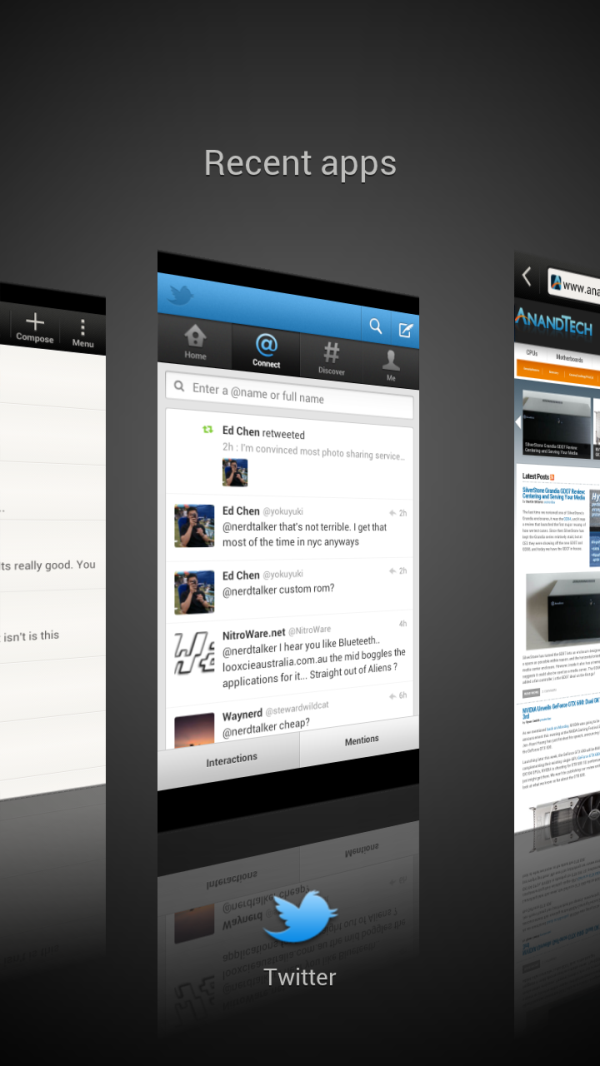 For probably the first time, I can honestly say I think HTC has has nailed that balance with Sense 4. The platform still feels and looks ICSey, and I think that’s what made previous iterations of Sense somewhat awkward - you couldn’t adequately grasp the theme or feeling of the underlying OS. HTC has changed things like overscrolling behavior throughout the OS, as elements now spread apart like an accordion. Toggle switches and buttons also get a new theme, but it isn’t an altogether huge departure from ICS, and (as required) Holo is still lurking underneath for applications that leverage it. 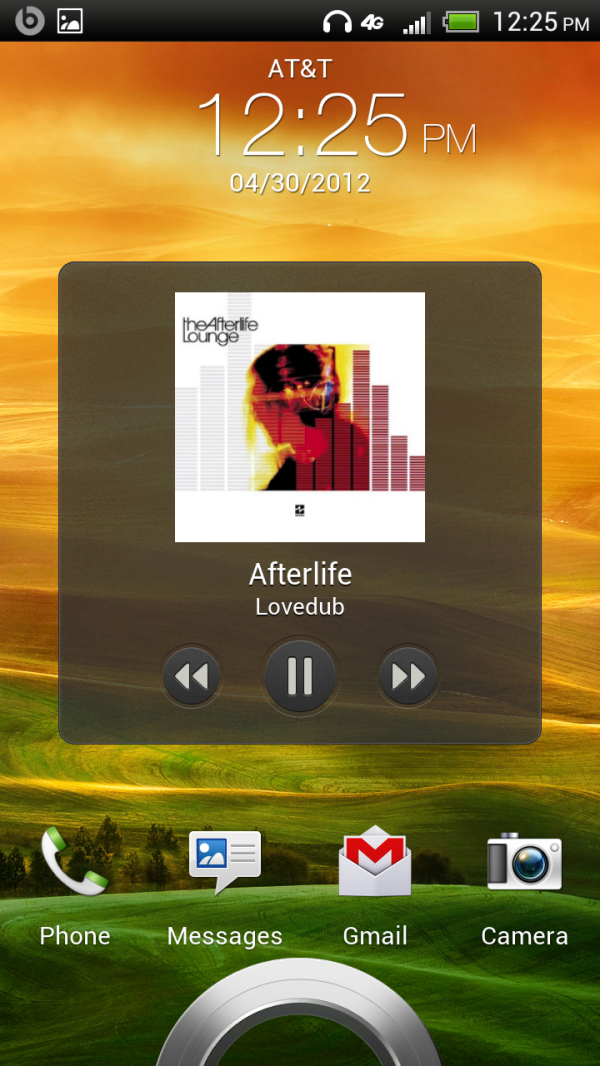 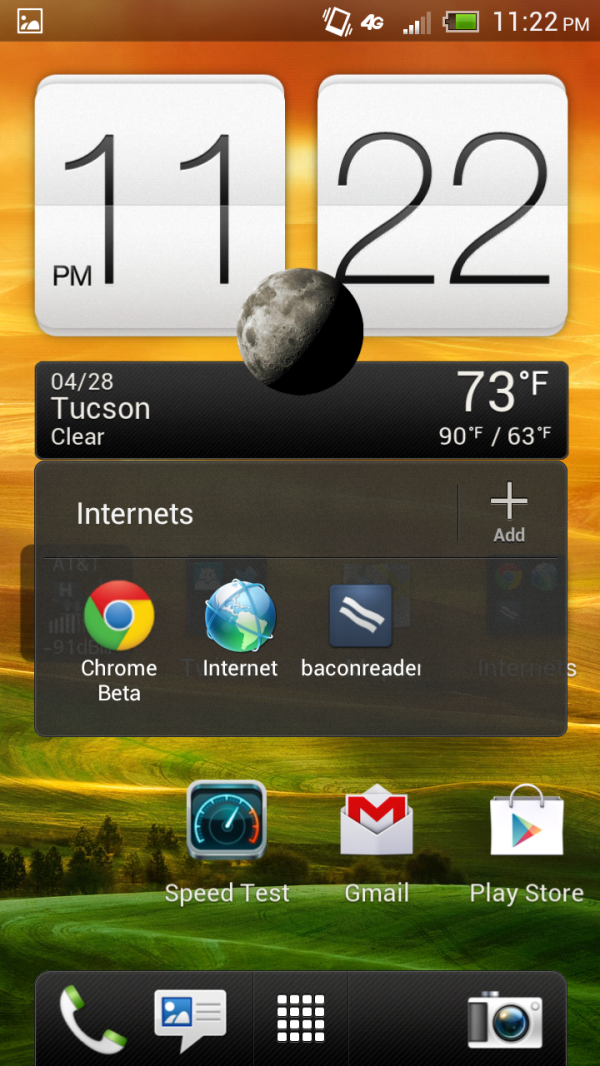 Like previous iterations, Sense 4 includes a number of lock screen customizations, including the ability to launch applications or SMSes by dragging their shortcuts into the ring. Unlike the previous version, you don’t get the ability to change the lock screen shortcuts directly, instead they’re inherited from the bottom dock-like row of applications on the launcher. The launcher now includes ICS features like folders on the homescreen for organizing shortcuts, and a new widget, app, and shortcut management view. 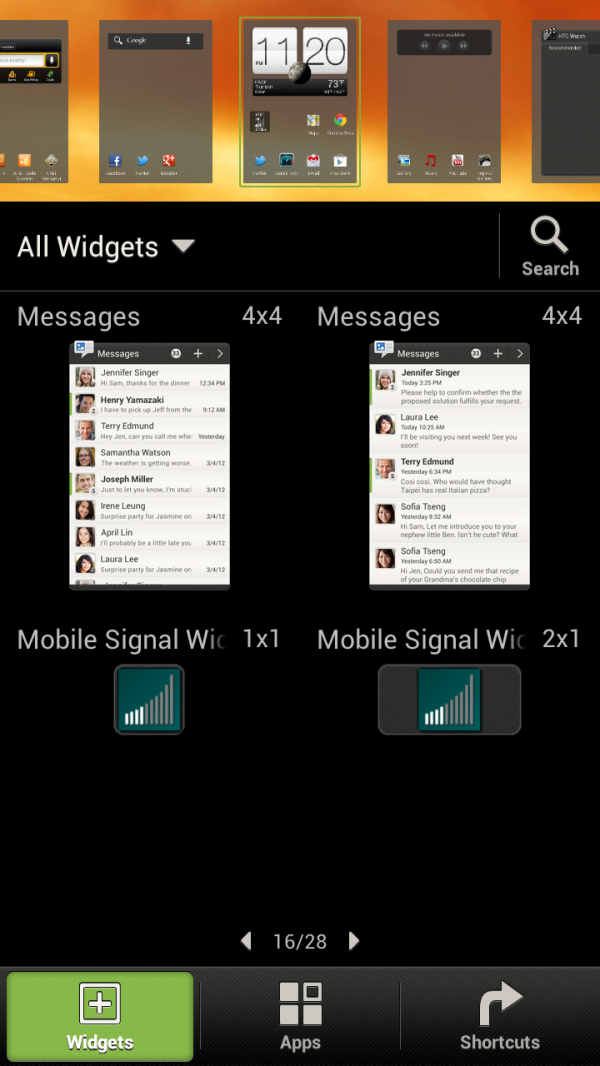 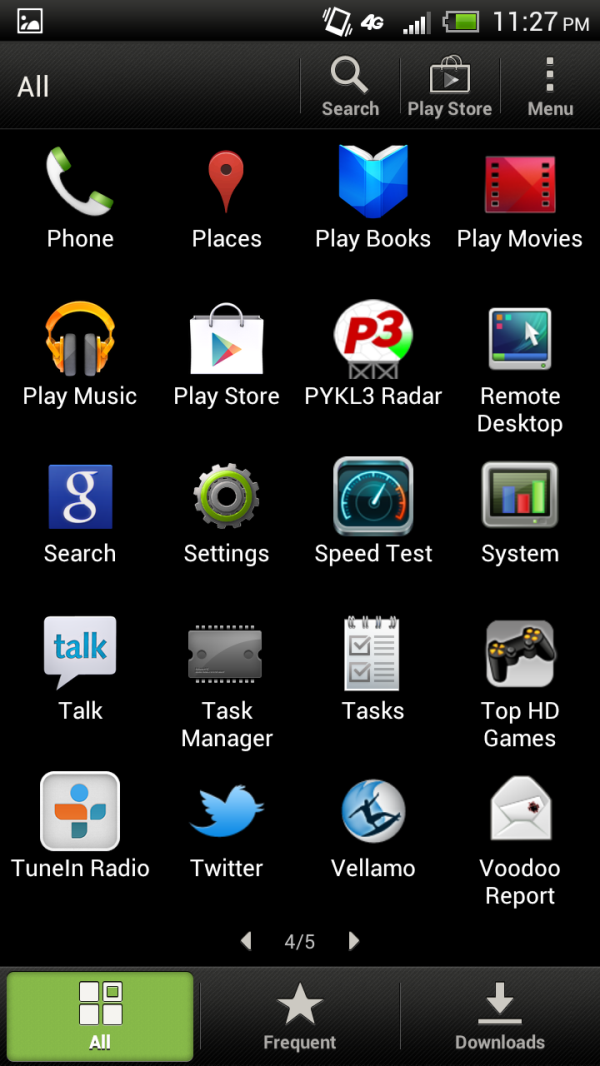 The main launcher gives you a paginated 5x4 grid of application tiles. HTC has done similar things in the past with the bottom three tabs - all, frequent (sorted by number of launches), and new downloaded applications. There’s not much to say here other than it’s interesting how most stock launchers have returned to paginated structure instead of just a big scrollable list view. Both the launcher and main homescreens are very very smooth, thanks to the combination of ICS’s OpenGL ES 2.0 2D acceleration and MSM8960.

The other main Sense customizations include both messaging, keyboard, and the task switcher. HTC has opted to change the task switcher entirely; instead of ICS’s transparent column of recently launched applications, the HTC Sense 4 launcher is a row of full screen previews. Applications can be closed by swiping them up (hello WebOS cards…) or switched between by tapping on them. 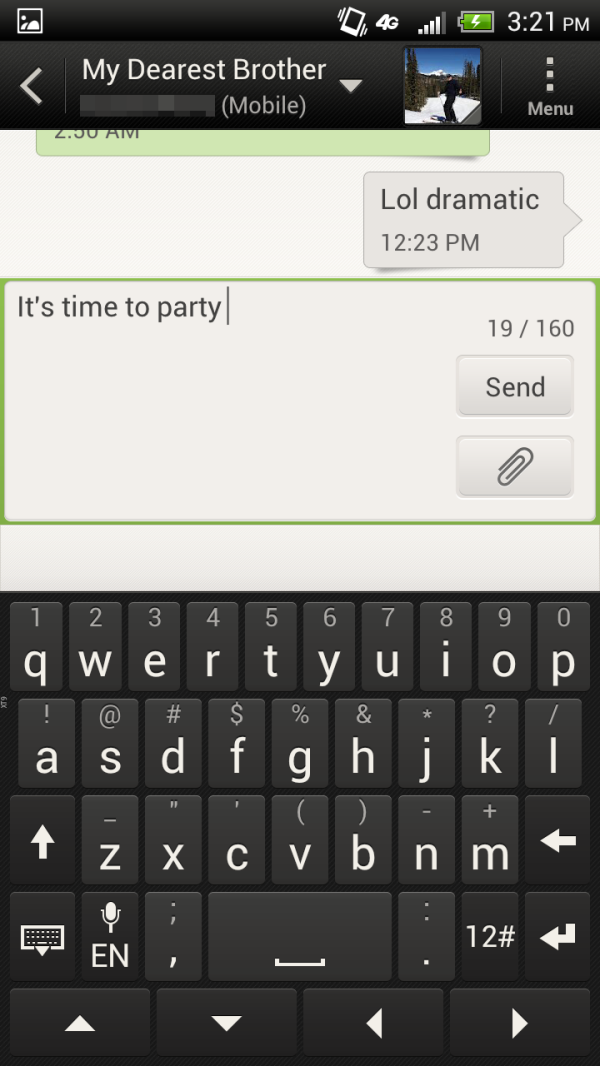 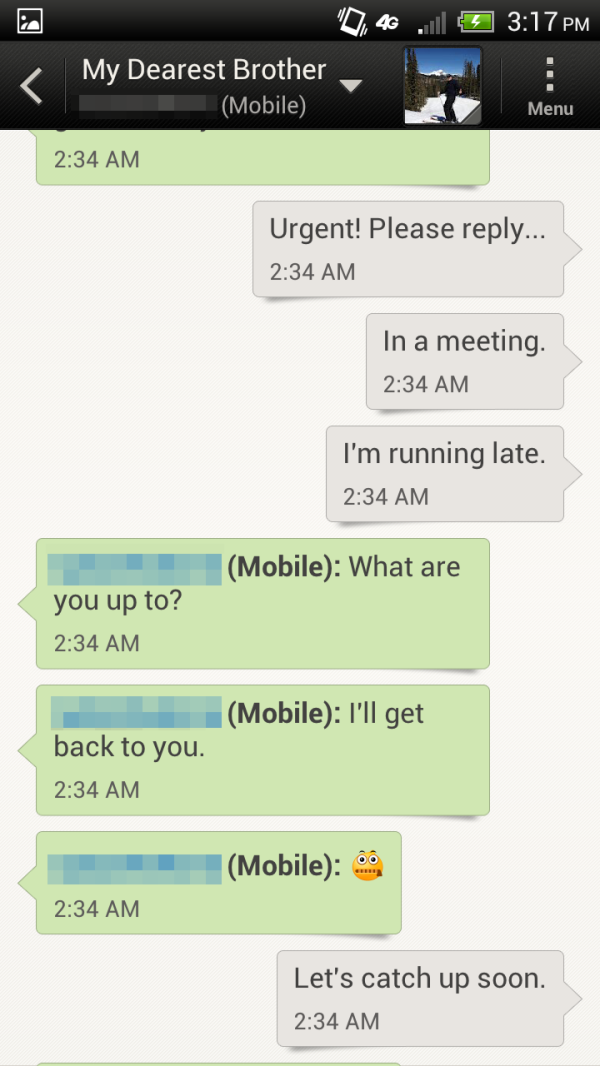 Messaging has changed subtly since the previous version of Sense, and feels snappier. One of my complaints with Android in general has been how messaging seems to always slow down after a few weeks worth of SMSes accumulate, and so far I haven’t run into that wall. I still do think the compose box is too big and covers too much of the conversation, and the default font seems gigantic, but thankfully one can change that. The Sense 4 keyboard also feels improved, and I can type at full speed without issue. That said, I’ll never understand why OEMs continue to remove the stock keyboard entirely. 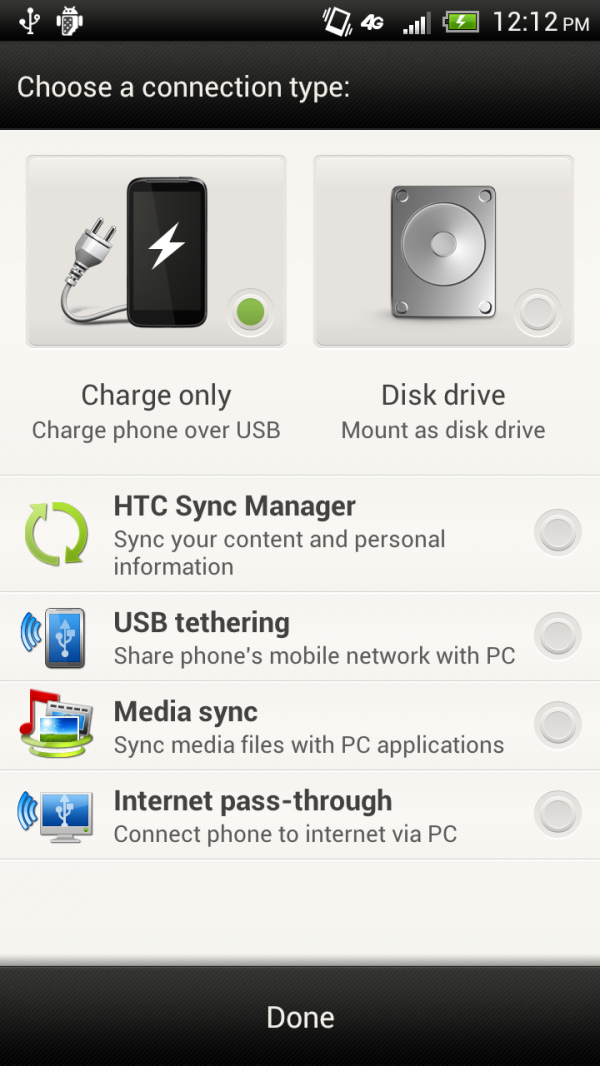 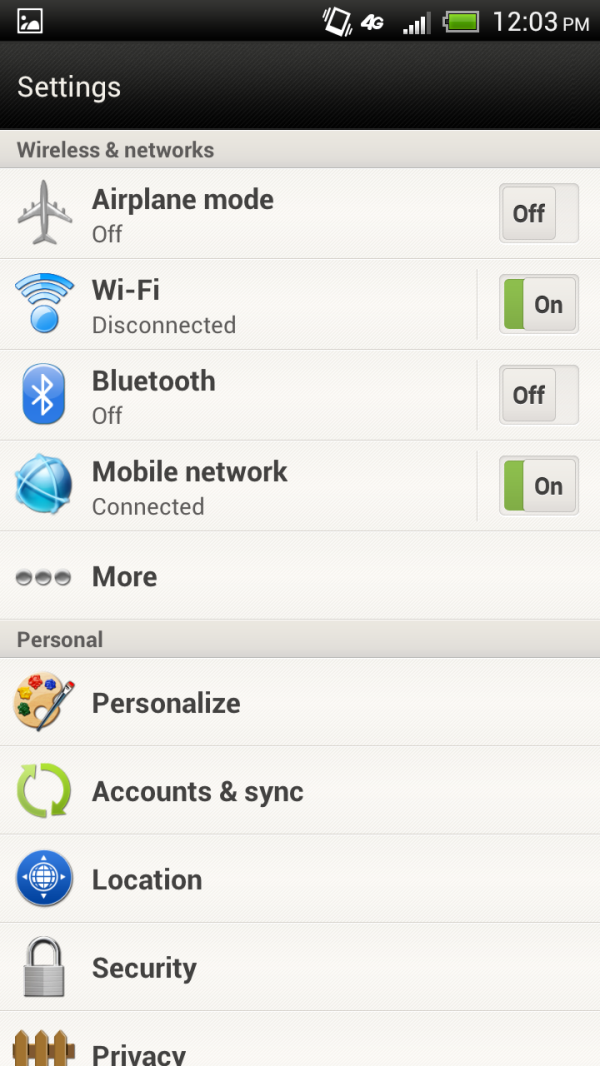 Another major design decision HTC has made is to go with the traditional USB disk drive mount option instead of MTP. I think we’ll see OEMs also go this route as the MTP connector on some platforms still leaves a lot to be desired. Sense 4 also leaves the notification shade virtually untouched - there aren’t any quick power settings or tabs, just the settings pane shortcut like stock ICS. All in all I feel like this is the new Sense 4 design language - minimalist and simple, not the self-justifying customization of every last window and view just for the sake of doing so.

Storage on the AT&T One X is 16 GB of integrated NAND. Like basically all Android phones, this is divided between an /sdcard mount point, and /data. Note that this architecture is basically required if you’re going to implement USB mass storage instead of using MTP.

So you get 9 GB of storage for media and photos, and 2 GB for applications, which is pretty much the normal storage split I see. Like we discussed in our initial ICS piece, you can either get unified storage with MTP, or the less cumbersome mass storage mount method. 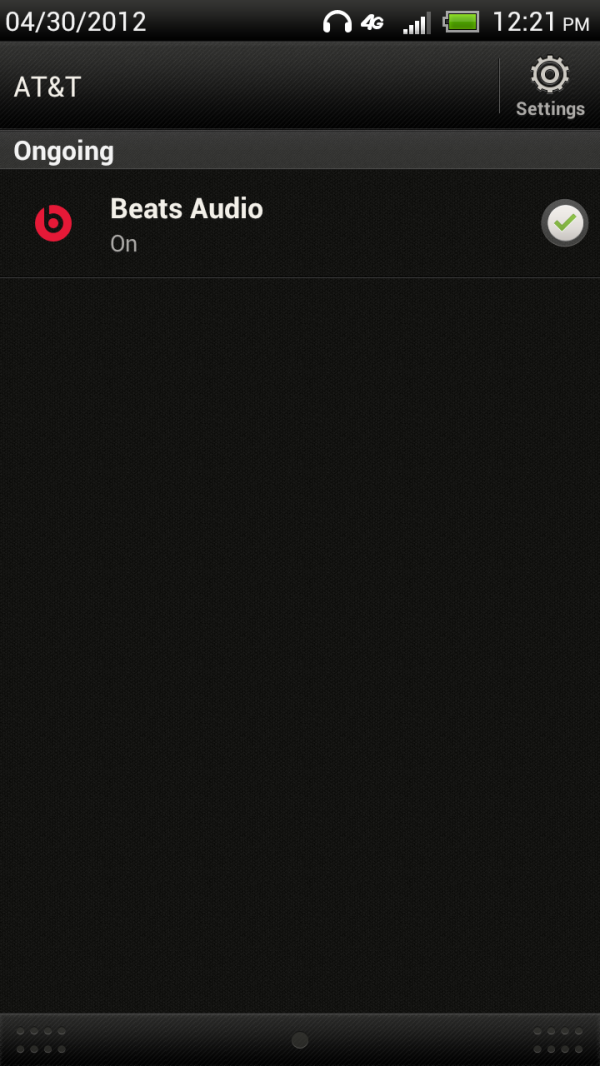 The last note is Beats Audio. HTC includes the Beats branding almost everywhere - it’s on the box, on the back of the device, on the boot splash images, and inside the OS. There’s no longer any Beats earbuds in the box, but a corresponding change in the way Beats works. The new change is that Beats now works for any headphones that you attach, instead of just Beats branded ones like previously. At some point I’m going to investigate Beats Audio integration in newer HTC devices more thoroughly, for now just know that new HTC devices give you the Beats DSP on any attached headphones. I will note that it sounds to me just like the Beats audio from the HP TouchPad, which is to say boosted bass and some dynamic range compression. I honestly prefer it off, but overall sound quality with it off is subjectively good - no background hiss or whine audible.

The rest of Sense is hardware related and involves another important consolidation - camera, which we’ll get into in the respective section.