In working on yesterday's Zenbook Prime review I ran into a problem with the 256GB Sandisk U100 drive that came with my review sample. Unfortunately, since the drive doesn't use a common form factor or physical interface I was limited in my ability to diagnose the problem. Luckily I happen to have a handful of Zenbooks around the lab, one of which had a 128GB U100 that I could swap in, allowing me to complete yesterday's review. I'm going to carry the dying 256GB U100 with me to Taiwan in a little over a week to hand off to ASUS for some forensic analysis.

The Sandisk U100, a poor performer but the only option in the Zenbook Prime

While I was trying to diagnose the problem with the SSD I wondered if I could use the Zenbook's SSD in OWC's USB enclosure for MacBook Air SSDs. The OWC enclosure simply routes SATA power and data pins to the MacBook Air SSD connector. The MBA (and Zenbook) SSDs are obviously SATA compatible, they simply feature a different physical (and electrical) pinout compared to the SATA drives we're used to. Both SSDs feature a proprietary gumstick form factor and appear to have a similar connector. Since I couldn't find any info online about compatibility between the two, I decided to do a little investigating of my own.

The standard SATA spec calls for a 7-pin data interface and a 15-pin power interface for a total of 22 pins. The ASUS Zenbook/Zenbook Prime SSD features a split connector with 12 pins on the larger portion and 6 on the remaining - I assume for power and data, respectively. The MacBook Air SSD on the other hand has a 12 + 2 pin configuration, with a large power, ground or non-connected pin occupying the remainder of the smaller part of the connector. It's always possible, albeit unlikely, that both ASUS and Apple settled on the exact same pinout for their interfaces, thus making these two form factors electrically compatible but with slightly different configurations. However if you line up the two connectors you'll see that there are physical differences that preclude using one in lieu of the other: 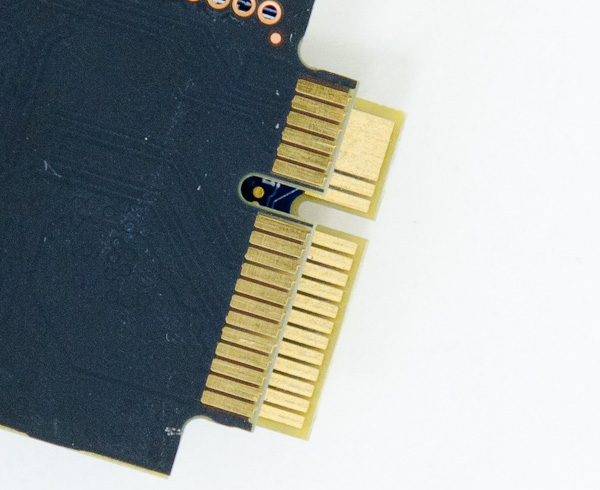 The Zenbook SSD's pins are slightly offset from those on the MBA's SSD. The ASUS connector is also slightly wider, which means that even if you can physically force it into a MBA you risk the pins not lining up properly and shorting something out (assuming the two interfaces are even remotely electrically compatible to begin with, which is a long shot at best). What about the reverse? The SSD in a MacBook Air has a narrower notch than its ASUS counterpart and won't physically install in a Zenbook/Zenbook Prime.

In other words, the MacBook Air and Zenbook SSDs are not compatible with one another. This is most unfortunate for ASUS as Apple already has companies making SSD replacements for the MacBook Air. I suspect that after the Zenbook Prime officially starts shipping we may start to see some interest from SSD makers. Anyone looking to get a head start on the competition should pick up a Zenbook now and begin work on a faster/better alternative to the U100 that's going to be shipping with all Primes.

One last thing, neither of these SSD form factors is compatible with mSATA although they look similar at a distance. mSATA features a wider, double-sided connector with more pins than either of these two options.