Along with the first pricing and availability details, Microsoft gave us some additional insight into Surface in a tour of the design and engineering facility where the project was first hatched.

Microsoft wasn’t specific about when work began on Surface other than to say that the company was thinking about what it needed to do to bring Windows 8 to market around the time Windows 7 was completed in the summer of 2009. The decision was made early on to bring a first party device to market that would be an extension of Windows 8. It was from that concept that Surface first emerged. 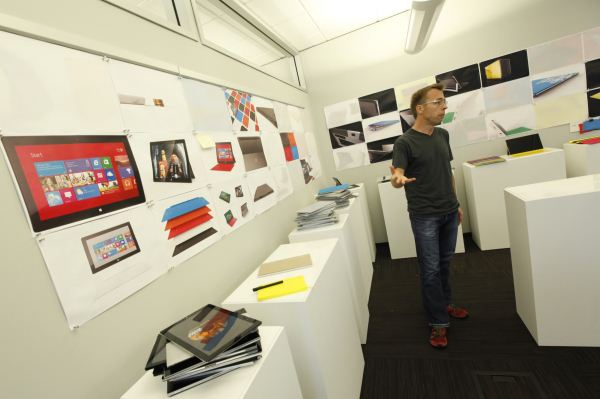 The design group that eventually created Surface started with the most simple of inspirations: a Moleskine notebook. Although Surface and its Type/Touch Covers make ample use of magnets (both for the kickstand and connecting the covers to the tablet), you’ll notice that there are no magnets holding the non-hinged side of the cover in place. According to Microsoft, it wanted to deliver a true book-like feel and the added resistance of having to overpower a magnet to open the cover of your tablet ruined that goal.

In the creation of Surface Microsoft was laser focused on eliminating so called scary interactions. Every physical interaction with Surface needed to be confident and consistent. From the kickstand to the interface between the covers and the tablet, Microsoft wanted everything to feel very solid. What Microsoft hoped would set Surface apart is its ability to quickly and confidently transform between multiple operating modes (tablet, notebook, standing display, covered display). In pursuit of that goal it put tremendous focus on build quality and materials choices. We’ve seen a resurgence in focus on build quality in recent years, but that’s typically simply to improve device feel - with Surface, having excellent build quality was needed to enable functionality. Users wouldn’t be likely to switch between various usage modes with the Touch Cover if doing so felt like you were going to break the device.

Microsoft’s efforts to guarantee a solid and consistent physical experience with Surface started on the manufacturing side but extended all the way through long term testing. The kick stand should always operate with the same feel and noise for the life of the device, the same is true for the covers. 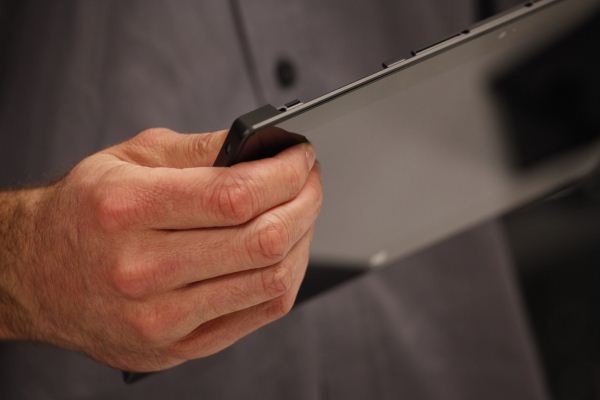 Microsoft claims it invested heavily in the VaporMg (vapor-mag) injection moulded magnesium process that it uses to create Surface’s chassis. The end result is a unique combination of strength, weight and surface feel. Despite the relatively common sounding name, Surface doesn’t feel like any other portable device as a result of Microsoft’ VaporMg. 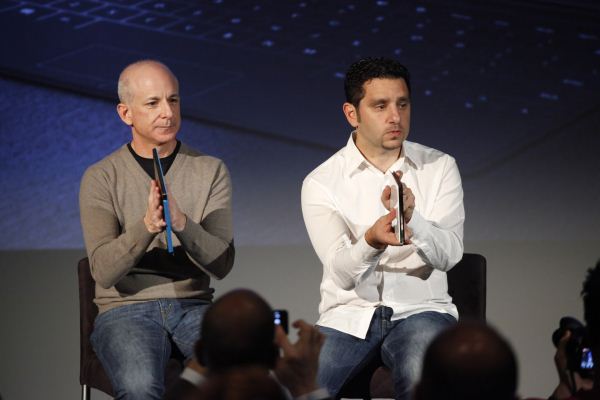 When Surface launched, we commented on the relatively unusual 10.6-inch diagonal display size. Microsoft told us that it originally targeted 10.1-inches for Surface however it resulted in a considerably more cramped multitasking experience, as well as the impact on the Touch Cover keyboard side drove the need for a larger display. Microsoft also considered going with an 11-inch display but eventually settled on 10.6-inches as the perfect balance of productivity and portability. 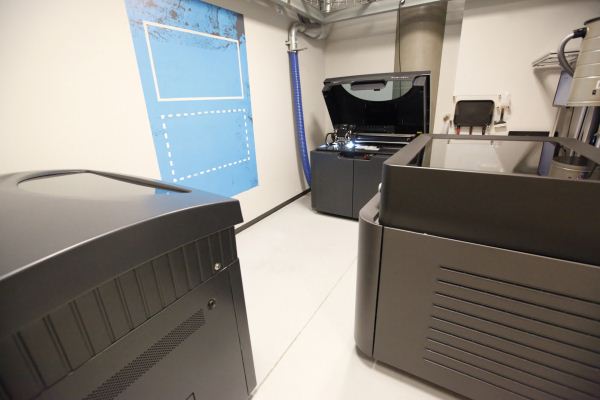 Microsoft iterated through hundreds of designs, making heavy use of in house polyjet 3D printers to rapidly prototype concepts. Features like determining the position of the sole USB port on Surface benefitted from the 3D printers. Microsoft is particularly proud of Surface’s USB port and is quick to point out that it’s a custom port, color matched to the rest of the chassis and with the same angle as the rest of the chamfer. 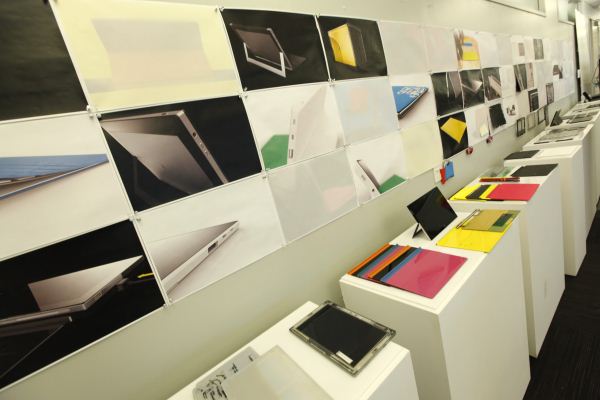 Just as important as the Surface tablet itself was the creation of the Touch and Type Cover designs. Microsoft was similarly focused on prototyping and arriving at the perfect cover. Unlike at the Surface launch event, Microsoft did allow us to type on the Touch Cover although I’ll refrain from coming to any conclusions about the keyboards after only a few minutes of use. 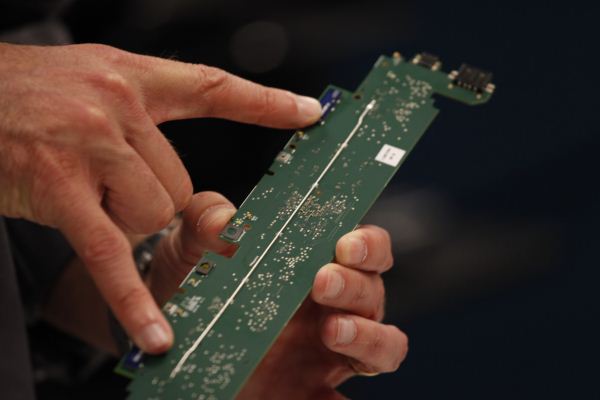 Microsoft gave us a look into a teardown of the Surface tablet. Very focused on WiFi reception Microsoft included two antennas connected to a Marvell 2x2:2 WiFi solution (88W8797?). The antennas are routed to the left and right of the front facing camera and are behind RF windows on both sides of the tablet to ensure RF passes through as unimpeded as possible. 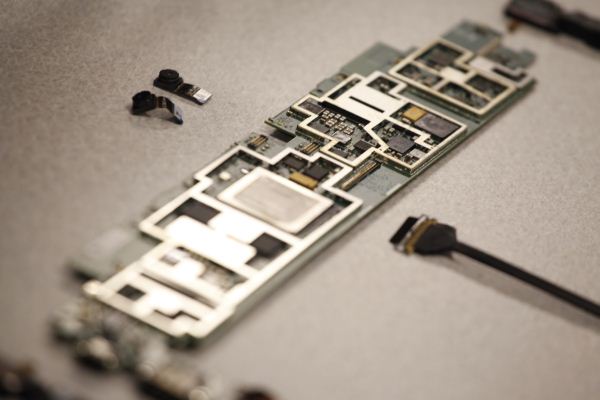 The Tegra 3 SoC appears to be paired up with two off-package DRAM devices. I couldn’t get a good look at the rest of the components in the design although I did see a few Atmel chips (touch controllers perhaps?).

Although Surface RT only ships with a 1366 x 768 panel, Microsoft was quick to point out that there’s more to display quality than pure resolution. Surface’s 10.6-inch panel features an optically bonded LCD and cover glass stack, similar to what we’ve seen in most modern, high-end smartphones. Optical bonding is expensive to do and not as common in large tablet panels, but Microsoft believes it can do so at reasonable yields on Surface. 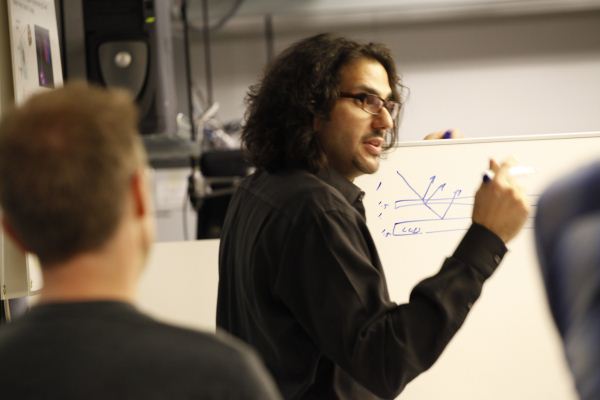 One clever trick is that Microsoft, through various coatings, index matches between the touch sensor’s ITO (Indium Tin Oxide) array and the cover glass, once again in pursuit of fewer reflections.

Microsoft claims it’s also very focused on delivering a well calibrated panel with Surface, although we’ll have to wait and put those claims to the test ourselves.

Most of what we’ve heard about how Surface isn’t unusual, after all it’s what you’d expect from a great device company. That in itself is the big takeaway however -Microsoft has transformed itself into a focused device maker and not just a software company.

Surface RT will be available on October 26th starting at $499 for the 32GB model with Office 2013 Home & Student edition. Once devices are available we’ll be sure to follow up with a full review.