The primary focus of the Cortex-M7 is improved performance. ARM’s goal was to elevate the M series performance to a level previously unseen, while maintaining the M series' signature small die size and tiny power consumption. There are at least two reasons ARM focused on performance for the M7 processor. First, they want to further drive a wedge between traditional 8- and 16-bit microcontrollers and provide ARM a further differentiated market position; second, the M7 will help support the IoT (Internet of Things) and wearable device markets. Focusing on enhanced DSP capabilities, the M7 is more suited to audio and visual sensor hub processing than any previous M series design. 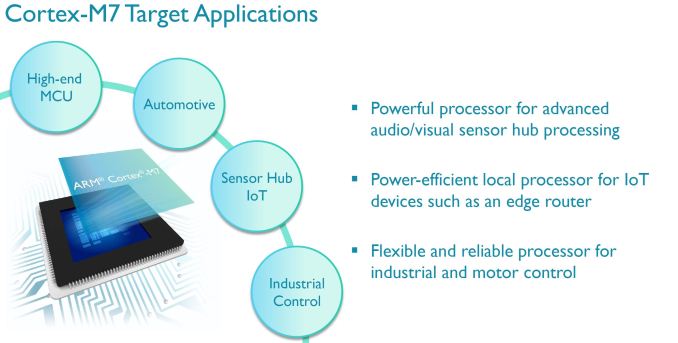 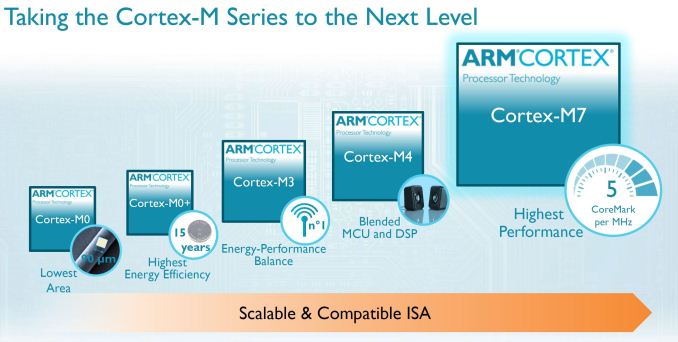 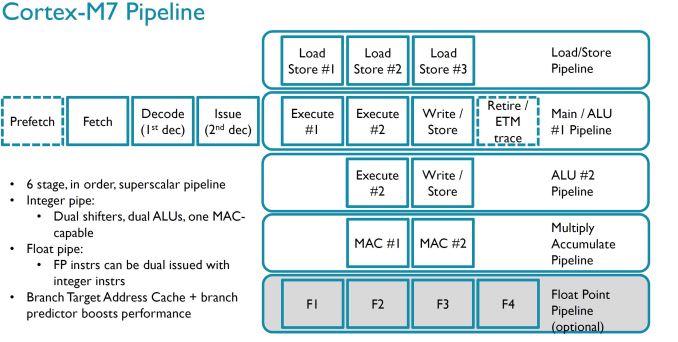 The presence of instruction and data caches, branch prediction, as well as tightly coupled memory are differentiating features of the M7 versus previous M series processors. Microcontrollers often forego caches and sometimes even operate with flash as the only memory interface. By providing high performance instruction and data caches, the M7 approaches more typical high performance processor design.

Tightly coupled memory (TCM) is a technology ARM’s partners can use to extend the effective caching of a single M7 processor and has only been seen in previous A and R series designs. In use, it can have the performance of a cache but, unlike cache, its contents are directly controlled by the developer. That is, TCM is part of the physical memory map of the microcontroller. Developers can place critical code and data inside TCM that can be deterministically accessed with high performance in routines such as interrupt service requests. The M7 supports up to 16 MB of tightly coupled memory.

Adding branch prediction allows arm to target dedicated DSP devices with its Cortex-M7 microcontroller. DSP code is often analog data stream filters for applications such as audio input keyword detection, audio output equalization, and frequency domain amplitude peak searching. When running on an always-on microcontroller these tasks are almost always looped. Without a branch predictor, the code must continually evaluate a loop condition that 99.9% of the time results in the same outcome. Branch predictors cost extra die space but when DSP is your target, they are an obvious design benefit. 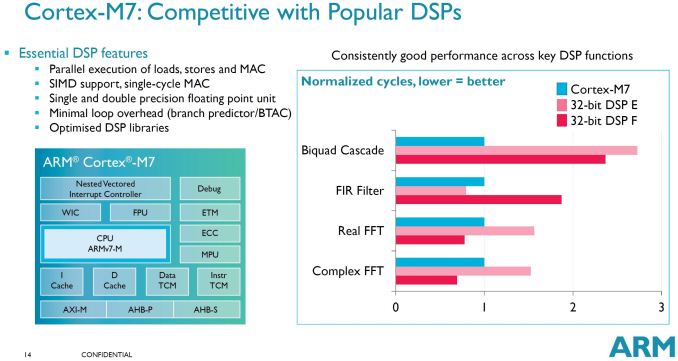 Summarizing the M series cores can be done both from an instruction features standpoint and also a die size and performance standpoint. Unfortunately ARM, who provides HDL (Hardware Description Language) that can be synthesized to physical chips, was not yet willing to provide die size numbers until their partner Cortex-M7 announcements, since the processor does not become physical until a partner gets involved. Until a partner releases data, we can simply assume the M7 somewhat larger than its predecessors.

ARM did state that power consumption of M7 is roughly in line with previous performance/mW, so we could estimate a corresponding increase of 50% to 75% more power consumption. Area is anyone's guess at the moment.