At this point the performance of Apple's A8 SoC is fairly well understood. There are some interesting changes to the version in the iPad Mini. The CPU has a peak clock speed of 1.5GHz, a 100MHz bump over the 1.4GHz A8 in the iPhone 6 and 6 Plus. The PowerVR GX6450 GPU should also have slightly higher clocks, as Apple states that the Mini 4 has 60% greater GPU performance than the Mini 2, while the iPhone 6 and 6 Plus were only advertised as being 50% faster than the iPhone 5s which used the exact same SoC as the Mini 2. Unfortunately it's still not clear exactly what clocks Apple has the GPU running at in any A8-based device. Finally, although the DRAM is not exactly part of the SoC itself, Apple is still using a package on package SoC/DRAM stack and has doubled the amount of DRAM to 2GB from the iPhone's 1GB.

While there won't be any massive gains over the CPU and GPU performance of the iPhone 6 and 6 Plus, the new A8 should provide some notable improvements over the iPad Mini 2 and 3. Relative to the iPad Air 2 performance should be similar in our JavaScript benchmarks, but there'll be a noticable gap in the the system and graphics sub tests in BaseMark OS II as they'll be able to fully take advantage of A8X's additional CPU core, cache, and much more powerful GPU.

Unfortunately we haven't actually had an iPad Mini 2 or an Air for some time now, and so I've decided not to include it in the charts as the results will no longer relevant or valid. Since we do have an iPhone 5s on hand I've used that as the point of comparison. 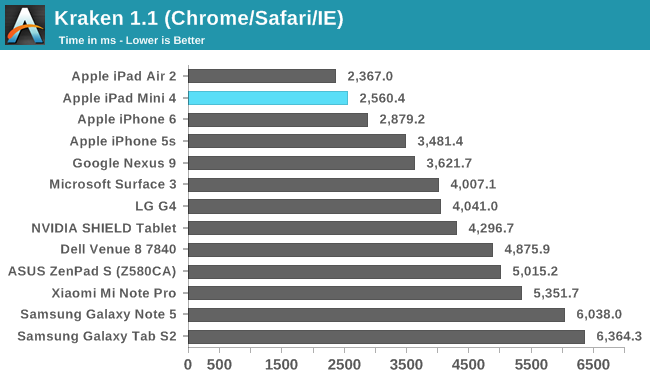 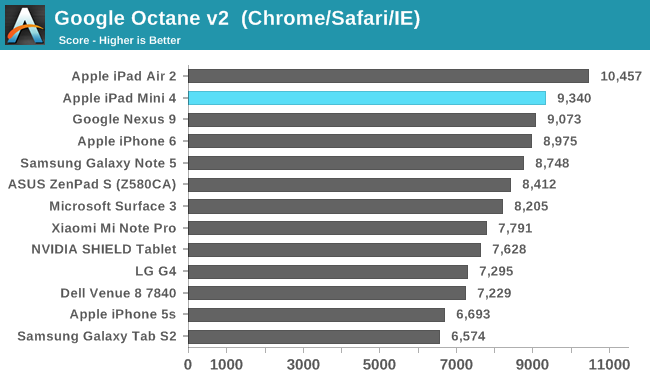 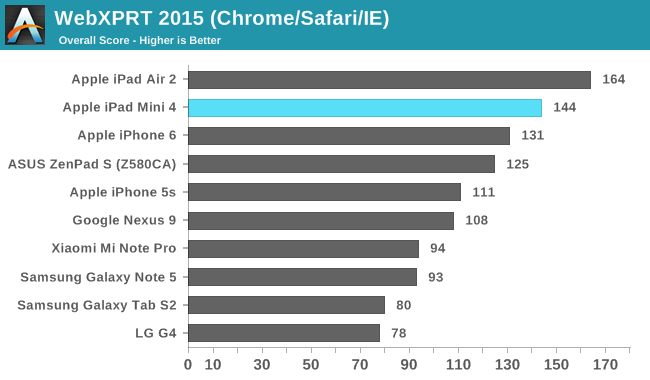 The interesting thing about JavaScript performance is that it's often bound by the performance of a single core. In this case the iPad Mini 4 does very well, and there's not a large gap between it and the iPad Air 2 despite the doubled L2 cache and additional core on the latter's A8X SoC. You certainly don't see anything even remotely close to a 50% lead for the Air 2 even though in a theoretical case where all cores are used entirely it would be 50% faster. 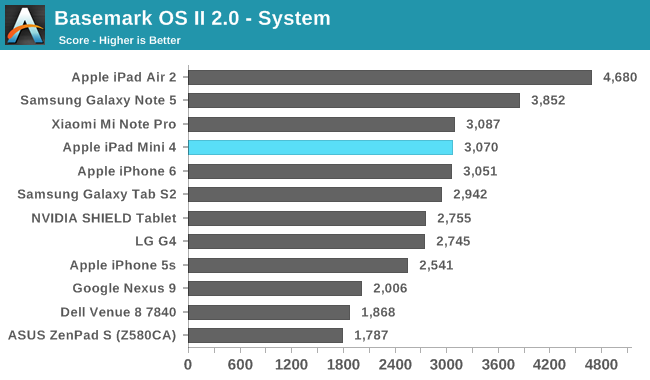 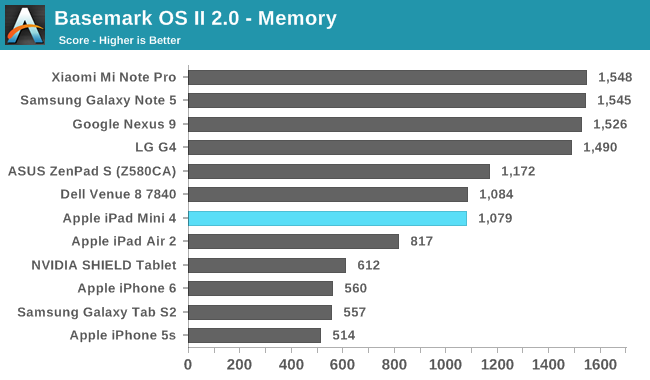 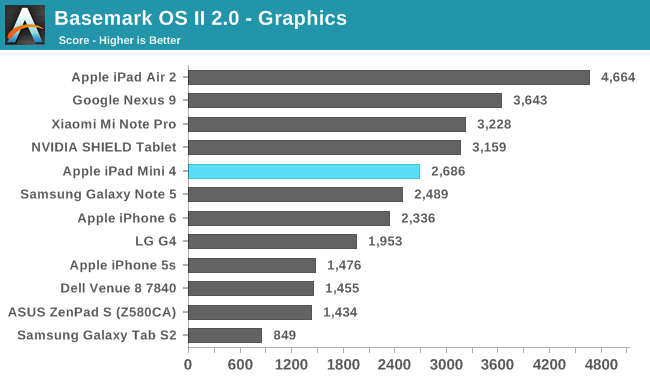 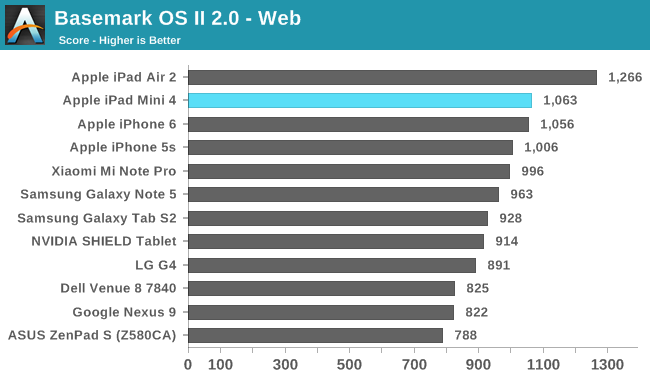 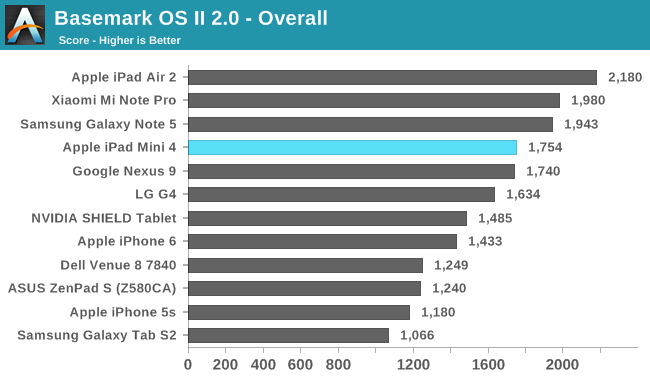 In BaseMark OS II's overall score the iPad Mini 4 is sitting right next to the Nexus 9, and both are relatively far below the iPad Air 2. However, it's important to analyze each sub test to see what areas a device excels at. Although it's right next to the Nexus 9 overall, the iPad Mini is significantly better in the system and web performance tests, while it falls behind in flash memory speed and graphics. Compared to the iPad Air 2 the Mini 4 falls behind in every test except for memory where it has a surprising lead. Looking at each test specifically, there's a tiny gap in web performance which echoes the results of our dedicated JavaScript benchmarks, and much larger gaps in system and GPU performance which makes sense as BaseMark OS II is designed in such a way that it will fully take advantage of A8X's triple core CPU and custom GXA6850 GPU in order to characterize their performance.

Overall I think the iPad Mini 4's general performance is right where it needs to be for a $399 small tablet. If you look at the results of the iPhone 5s you see that there is a significant gap between them in every test. The performance leap coming from the iPad Mini 3 certainly isn't like the leap that the original iPad Mini to iPad Mini 2 was when Apple moved directly from their A5 SoC to A7, but there's still a healthy improvement in performance across the board. 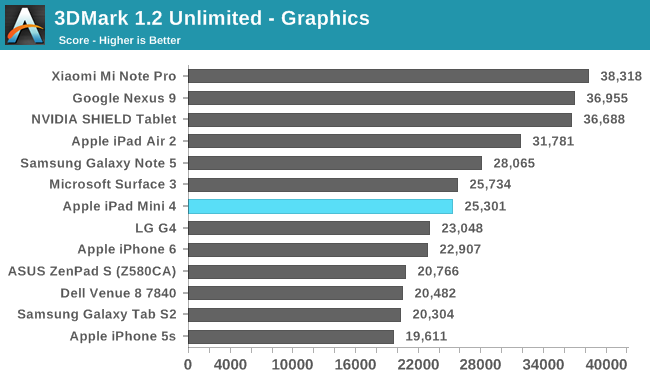 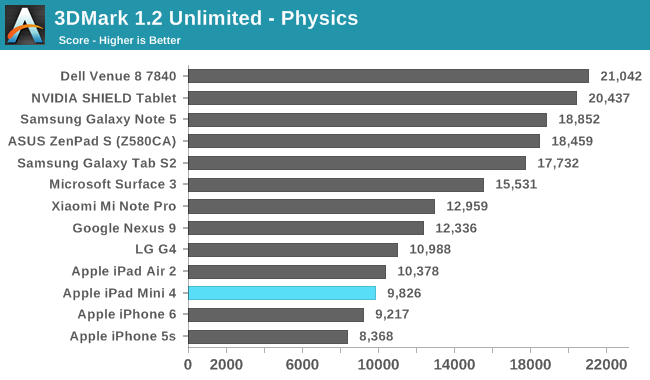 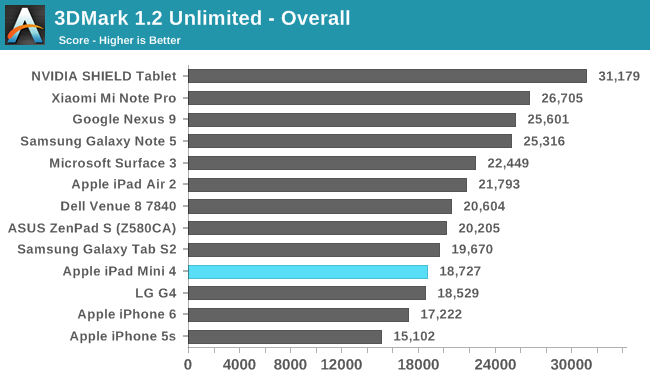 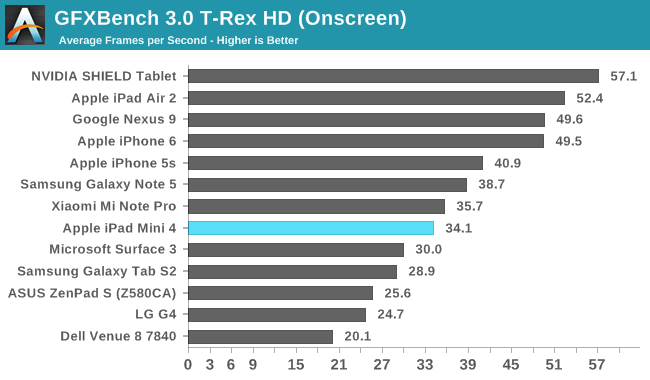 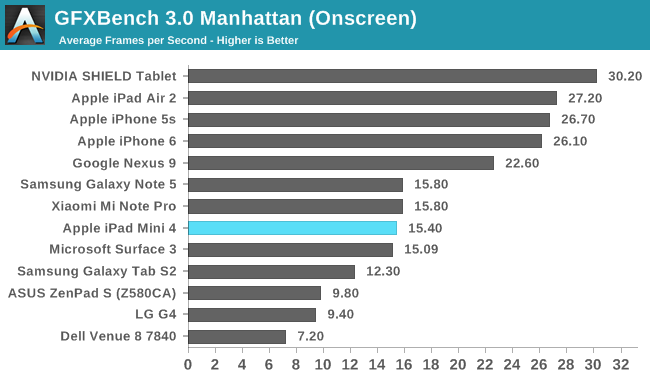 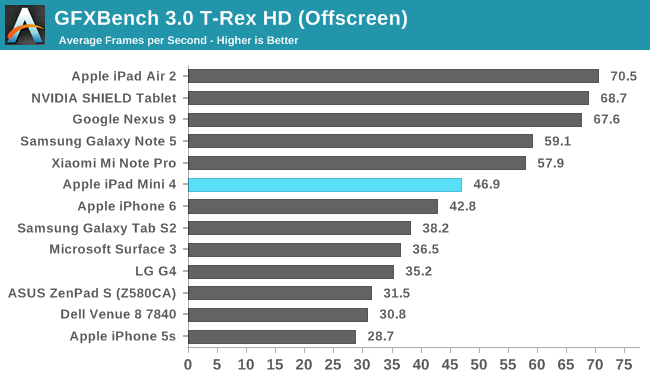 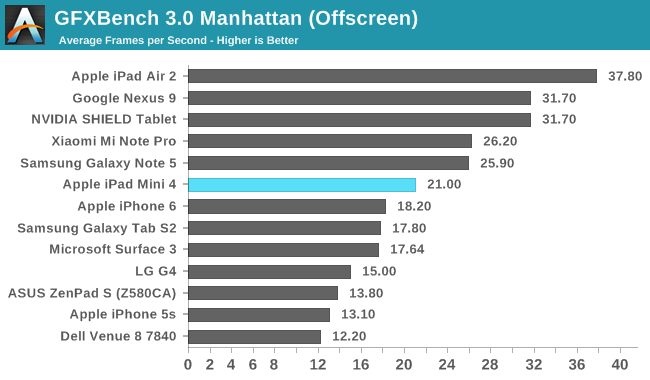 In GFXBench 3 the Mini 4 does pull ahead of the iPhone 6 when considering off screen 1080p performance, although with on screen performance the iPhone is much faster due to its lower resolution display. The level of graphical fidelity in the Manhattan benchmark is still too great to run consistently smoothly on the Mini at its native resolution, although a game with the visual quality of the T-Rex HD test would be playable at 2048x1536.

As I said earlier, the Mini 4's GPU performance is certainly not at the same level as the Nexus 9 or the iPad Air 2, but for a $399 8" tablet I think it's more than sufficient. One interesting point of comparison is the SHIELD Tablet, which was only $299 and has a very large lead over the Mini 4 as a result of its mobile Kepler GPU. It's also worth noting that while the Tab S2 model I reviewed was the 9.7" model, the 8.0" version should have identical results, and so the Mini 4 does have a decent lead over that. In the end the Mini 4 would have class-leading GPU performance if it weren't for the SHIELD Tablet, and NVIDIA definitely deserves credit for the level of GPU performance they were able to put into an 8" tablet. Even so, the Mini 4's GPU isn't going to have any trouble running the 3D apps or games on the App Store. 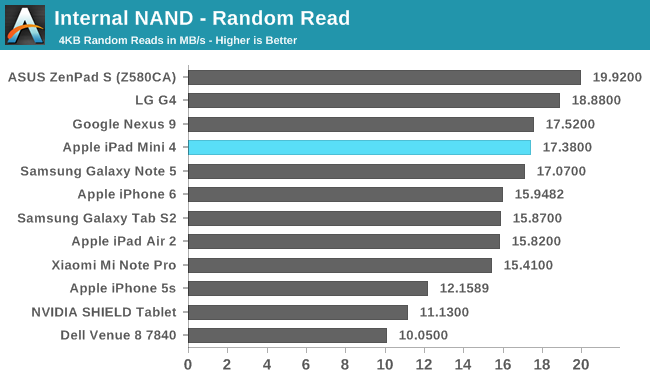 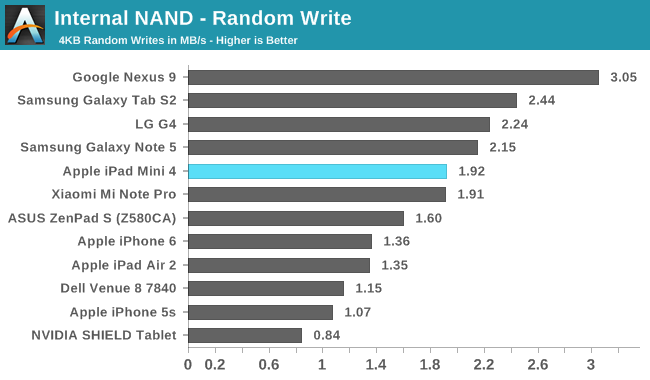 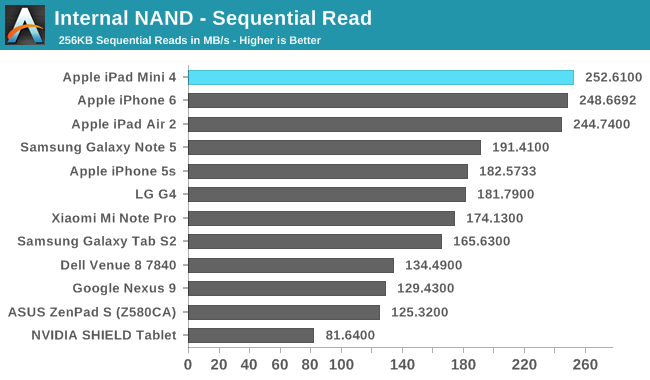 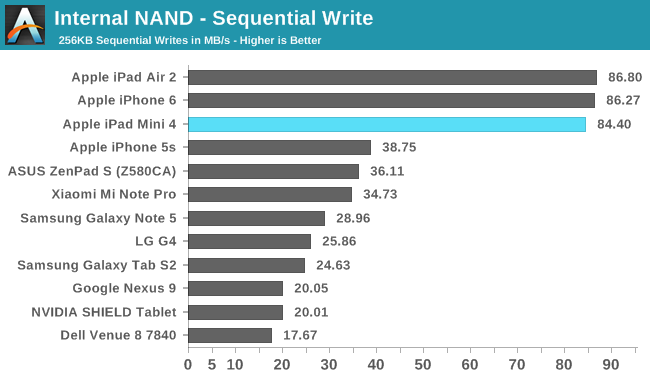 Storage performance on the iPad Mini 4 is where one would expect it to be. As usual, Apple excels when it comes to sequential reads and writes due to the use of SLC caching, with random read and write speeds also being very good, although not the best that we've seen on mobile devices. It's worth noting that my test model is a 128GB unit, and storage performance will be lower to some degree on the 64GB and 16GB models as flash storage uses parallelism heavily to improve performance by writing to multiple dies, and with a smaller storage capacity you have fewer dies to write to.