Patriot went with the combination of an aluminum upper half and a plastic lower body, which is popular arrangement for top tier mechanical keyboards. In an attempt to differentiate their product, Patriot went with a more aggressive design than the common subtle flat plate we are used to encountering, adding a rounded trim on the edges of the keyboard, and a very thin chrome strip surrounds the top of the keyboard. The aluminum parts are brushed and silver, while the plastic parts are all black. A metallic strip has been installed beneath the plastic front of the keyboard, in order for the magnetic palm rest to be attached as aluminum does not react to magnets. 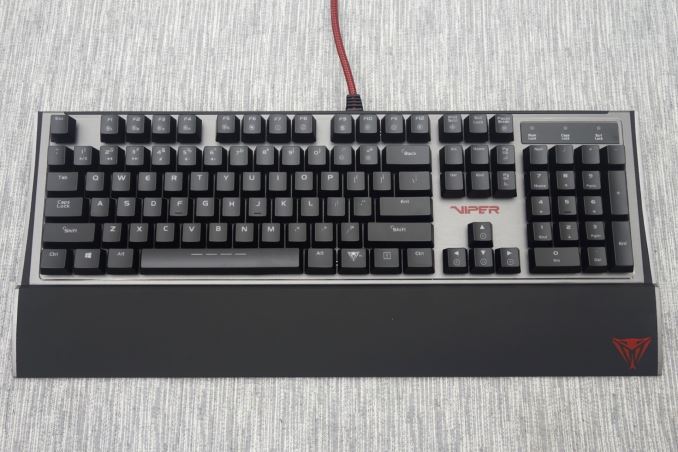 The Viper V760 is a standard full-size keyboard, without any extra keys and switches. It follows the standard ANSI 104 key layout, with the exception that the right “Windows” key has been replaced with an “Fn” key that has the Viper product series logo printed on it. There are no extra keys or volume control wheels/knobs. 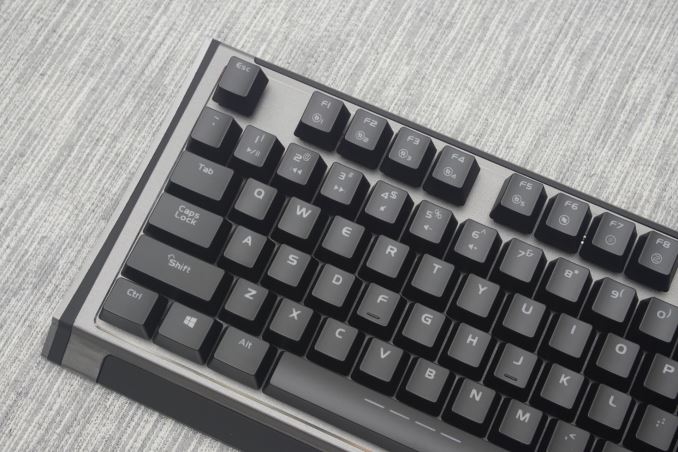 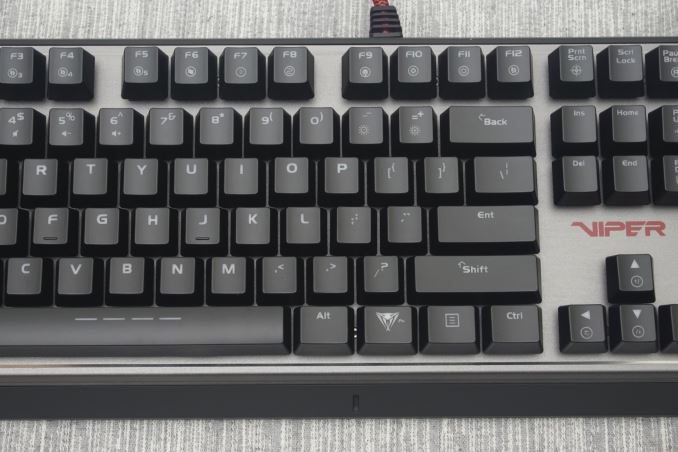 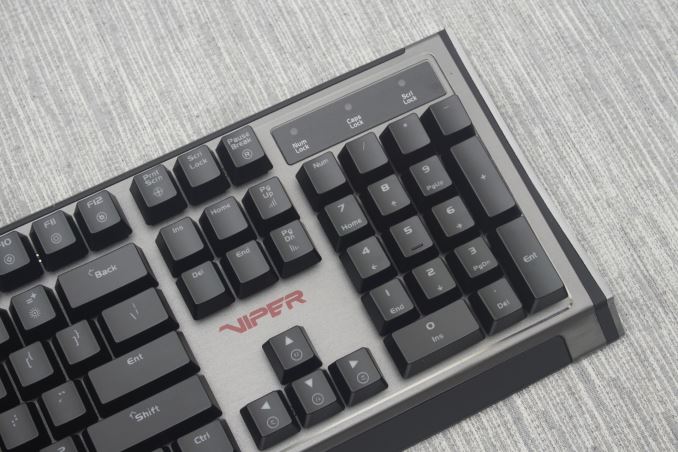 The stock keycaps of the Viper V760 are made from ABS, are cylindrical, and have normal size characters printed on them. In an attempt to fix the common problem where the backlighting illuminates only the main character of the keycap, Patriot moved the secondary characters to the top right corner of the keycaps. This position might cause confusion at first, but it should not affect anybody with a little experience.

At the right back side of the keyboard, we find one USB 2.0 pass through port. This is commonly useful for gaming mice, or just for quick access to an external disk or flash drive. 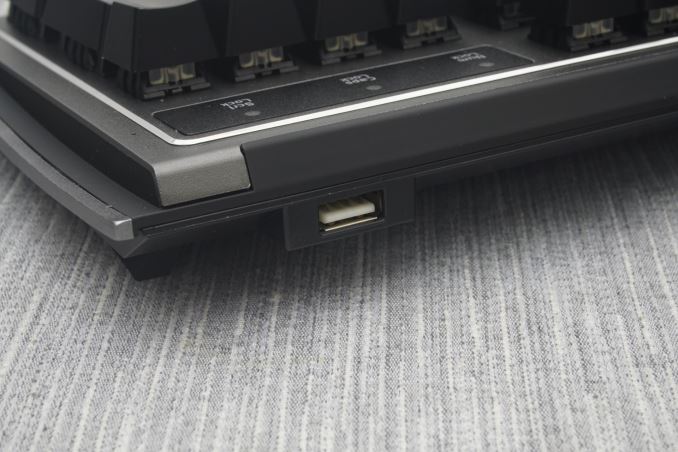 Removing the keycaps, we find that the Viper V760 is based on Kailh switches. Our sample came with brown switches. Kailh’s products are a direct copy of the Cherry MX switches, with the exact same specifications and behaviour, meaning that the brown switches of our sample are (or should be) exactly the same as Cherry’s MX Brown tactile switch. We shall check their performance during our quality testing in the following pages.

Unlike Cherry’s approach, Kailh is using metallic stabilizers for the larger keys. These can cause the keys to wobble if not properly applied, but this is not the case with the Viper V760, where the keys felt just as stable as with any Cherry MX based board. The only real downside is that the larger keycaps are not as easily removable, as they have to be carefully removed from the stabilizer, whereas Cherry’s approach allows for the keycaps to come off just as easily as with any other key. 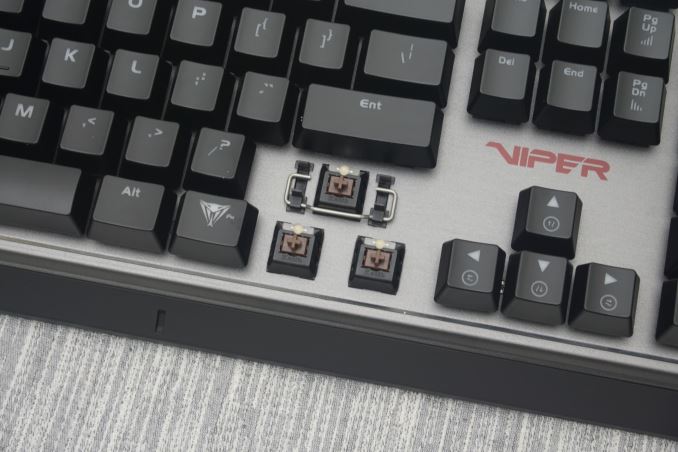 The RGB lighting is performed using an LED array mounted at the top of the switch, just like a single LED would be. Kailh is not using clear switch bodies like Cherry does, so the lighting is not being diffused around the key. It is primarily focused on the key’s characters, but some does spill around the keycap, mainly towards the top of each key. Patriot also lengthened the Spacebar’s opening, which seemed like a nice idea at first, but the single LED is actually illuminating only the centre of it, causing a visual dissonance. 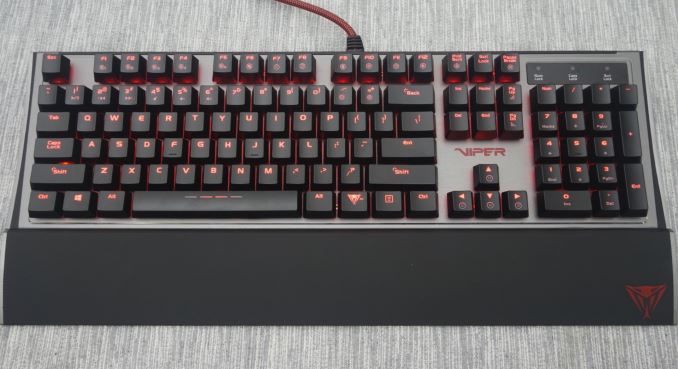 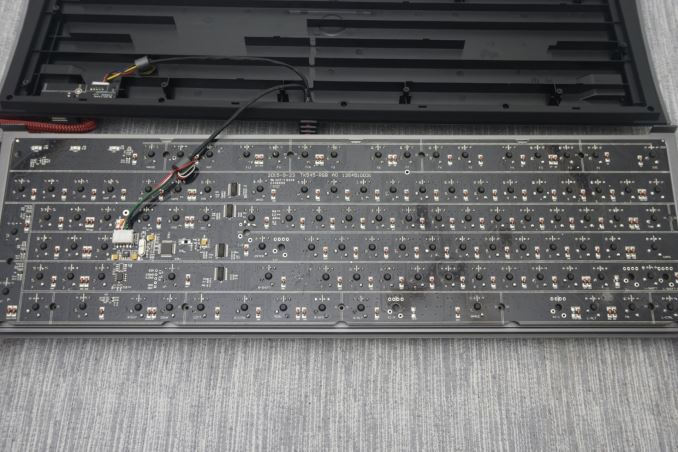 The keyboard is using an HSAK3201 ARM processor and HSAK021 LED drivers. Bluntly put, we have no idea what their specifications are or even where these came from, as no information about the chips or their series can be currently found online. 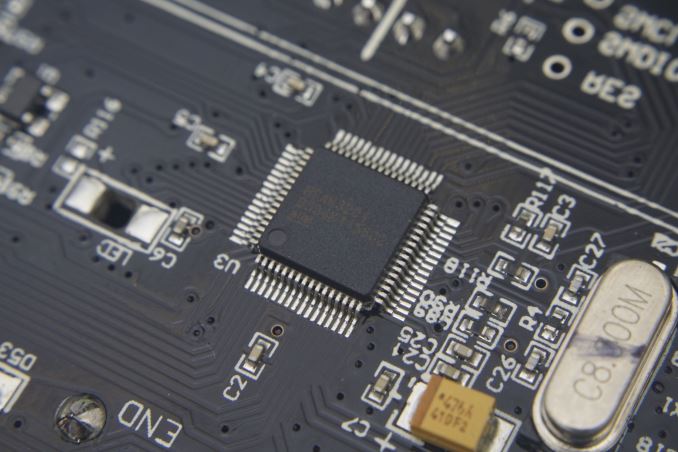