In order to test the quality and consistency of a keyboard, we are using a texture analyser that is programmed to measure and display the actuation force of the standard keyboard keys. By measuring the actuation force of every key, the quality and consistency of the keyboard can be quantified. It can also reveal design issues, such as the larger keys being far softer to press than the main keys of the keyboard. The actuation force is measured in Centinewton (cN). Some companies use another figure, gram-force (gf). The conversion formula is 1 cN = 1.02 gf (i.e. they are about the same). A high quality keyboard should be as consistent as possible, with an average actuation force as near to the manufacturer's specs as possible and a disparity of less than ±10%. Greater differences are likely to be perceptible by users. It is worth noting that there is typically variance among keyboards, although most keyboard companies will try and maintain consistency - as with other reviews, we're testing our sample only.

The machine we use for our testing is accurate enough to provide readings with a resolution of 0.1 cN. For wider keys (e.g. Enter, Space Bar, etc.), the measurement is taking place at the center of the key, right above the switch. Note that large keys generally have a lower actuation force even if the actuation point is at the dead center of the key. This is natural, as the size and weight of the keycap reduces the required actuation force. For this reason, we do display the force required to actuate every key but we only use the results of the typical sized keys for our consistency calculations. Still, very low figures on medium sized keys, such as the Shift and Enter keys reveal design issues and can easily be perceptible by the user.

The performance of Kailh’s Brown switches is in line with what we've seen on previous products. Kailh’s products lack the tighter consistency of its competitors, with our instrumentation showing a disparity of ±8.77% on the main keys. Most of the keys that are more than 10% from the average are, as one would expect, the larger keys in play, such as the shift, tab, enter and space bar. Due to the large key size, this is usually not high enough to be perceptible by the vast majority of users, especially with brown switches, where the actuation point is after the tactile bump that requires significantly higher force to overcome anyway. Although Kailh does not seem able to match Cherry’s manufacturing quality, we cannot claim that our results are bad or in any way problematic for users.

Patriot also claims something else about these switches - that they are silent. It is known that mechanical switches generally are not silent, generating noise when they bottom down and when they are reset. Some switches, such as the tactile blue switch, also generate noise when they pass their pressure point. We believe that Patriot wanted to say that the keyboard is silent for a product with tactile switches. True enough, the brown switch does not make any clicking sound when it passes the pressure point, but it is just as loud as any other switch when it bottoms down or when it resets.

Patriot took a peculiar approach with their software, trying to fit everything into a single screen. All of the options are stacked to the left side of the screen, with the lighting options starting at top. There are ten pre-programmed lighting effects that the user can choose from, as well as static and per-key lighting that can be manually programmed as well. Two bars can adjust the intensity of the backlighting and the speed of the lighting effects. 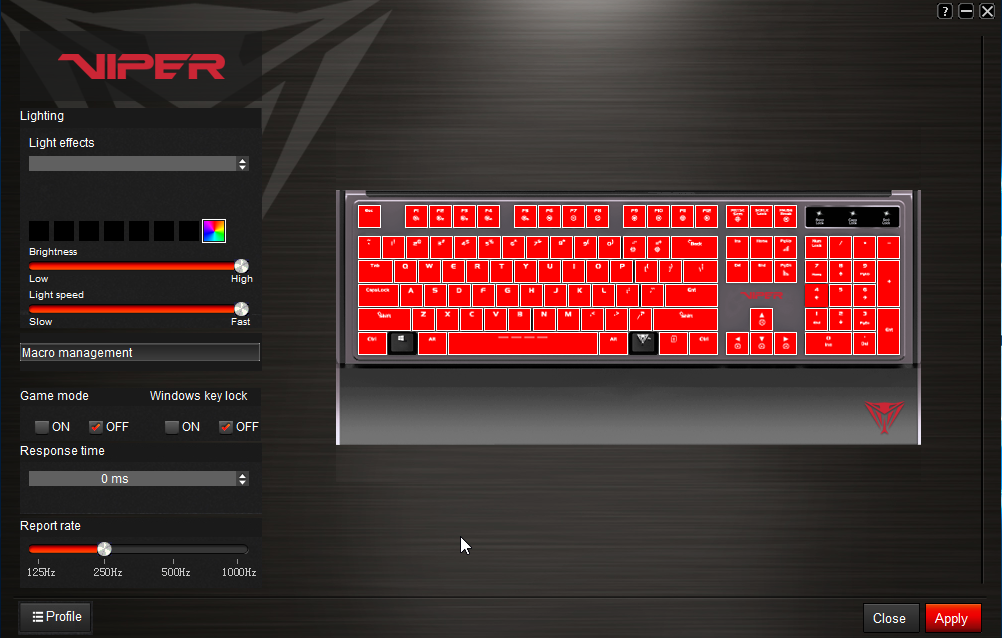 Beneath the lighting options, there is a macro management button that pops up a secondary screen with the programmed macros. A virtually infinite number of macros can be performed, but the software’s capabilities are very poor. Only keyboard keystrokes are being registered, with the options of recording the delay between the keystrokes and setting a number of loops to each macro. There are no options to manually edit the macros or to insert any mouse-related options, similar to basic macro software that comes with motherboards. In short, the macro recording capabilities are very limited and all advanced users will definitely require third party software for the programming of macros. 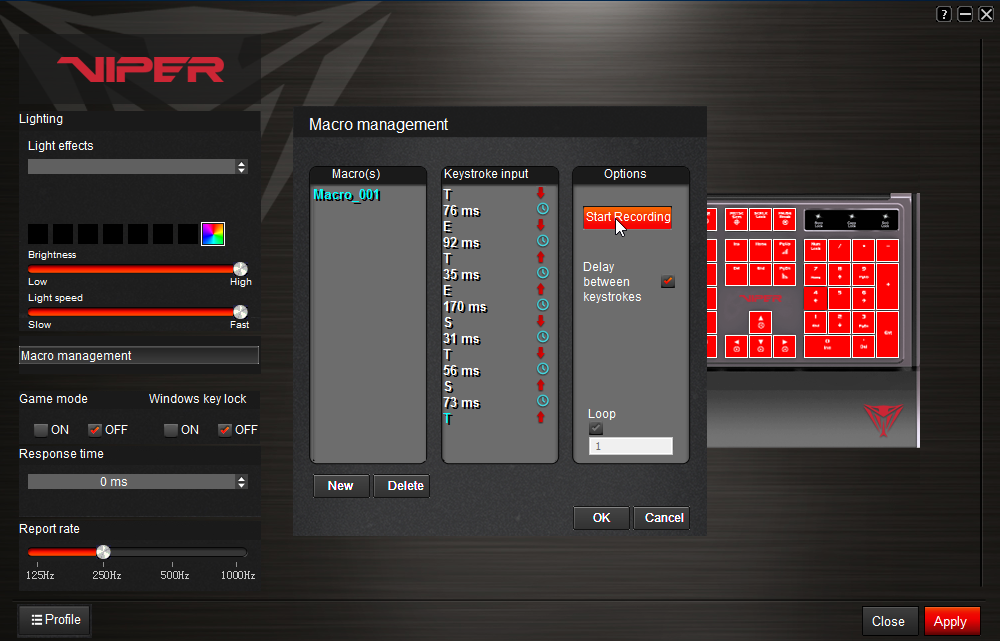 Each key can be individually programmed, allowing the creation of multiple different modes. The user can select from single or combined keystrokes, programmed macros, basic windows functions (e.g. media command, default browser launching, etc.) and advanced functions. The advanced functions virtually are just the launching of an external music file, application or folder. Finally, keys can be entirely disabled as well. 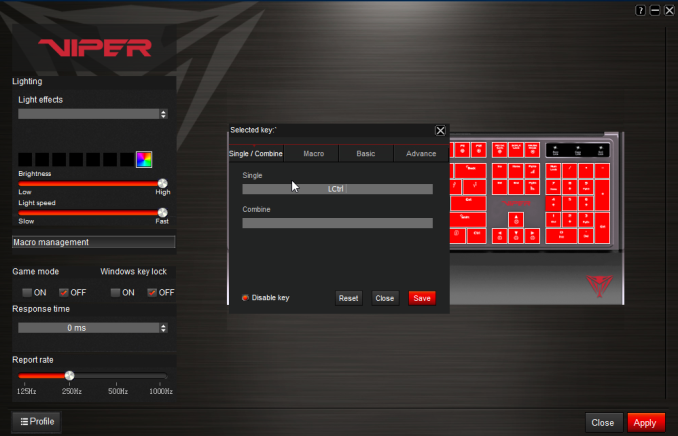 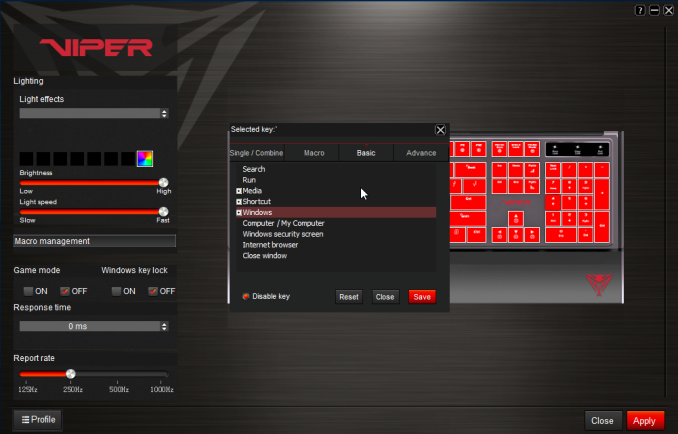 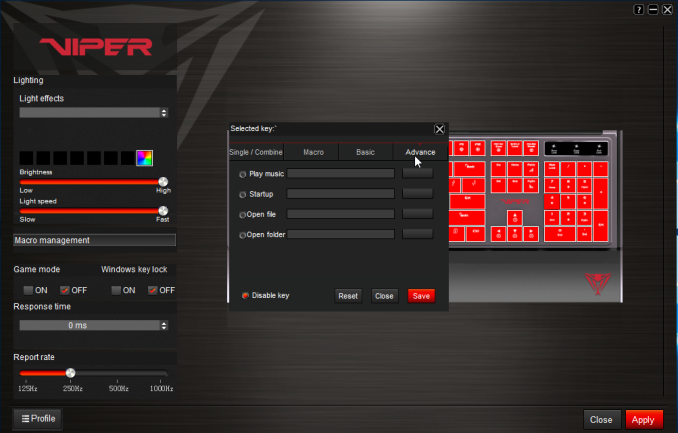 Finally, there are two options having to do with the keyboard’s controller, and these are the response time and report rate of the keyboard. If there are no compatibility problems, the report rate should be left to its maximum.