Samsung transitioned its Galaxy lineup to “premium” materials—glass and metal—last year, a trend many OEMs are following as they try to improve the perception of quality and luxury for their high-end and mid-range devices. LG, however, stuck with plastic for the G4; its only concession a series of optional leather-clad back covers. Despite being known for making plastic phones, LG is no stranger to metal: The G4 incorporated a metal alloy midframe to improve stiffness, and the sides of the V10 were stainless steel.

But the G5 is a radical departure from previous LG models in both material and design. Its (nearly) all-aluminum, unibody construction is a first for LG, and its iconic rear-mounted buttons are gone. It manages to be both completely new and totally familiar, ultimately transformed and regrettably unoriginal. Observing one important distinction, however, collapses this dichotomy into a unique state: This metal phone has a removable battery.

A removable back that allows easy access to the phone’s battery is a clear advantage for plastic construction. This approach is no longer possible with a unibody design, which, up until now, sealed the battery within a secure vault. LG’s novel solution approaches this issue from a different angle—specifically from the bottom rather than the back.

The portion of the phone below the screen separates after pushing a small button that sits flush with the left side to prevent accidental release. After rocking it back and forth a few times and giving it a good tug, the lower chin section and battery assembly slide out freely. Separating the battery and chin section causes some anxiety because it requires a fair amount of prying force, and the two hooks on the bottom of the battery, which lock the pieces together, are made of plastic. The chin section is mostly aluminum, but the front plate that includes the LG logo is plastic, as is the piece that holds onto the battery. I’m not convinced that this all-plastic attachment scheme for the battery will not wear out over time. If it does, it should not affect the function of the phone—the battery will still be held firmly in place once fully assembled—but will make removing and inserting the battery a bit trickier.

Combining an easily swappable battery with an aluminum unibody design is the G5’s defining feature and LG gets it mostly right. Besides my concern about battery retention mentioned above, I would like to see a rubber gasket incorporated into the chin section. Even though there’s a tight fit between it and the inside of the phone body, water could still find its way inside the phone. However, the catch that secures the chin section is made from metal and interfaces directly with the phone’s aluminum housing, which is a plus for durability. Also, considering this is a mass-produced, cost-sensitive device, LG does a decent job controlling manufacturing tolerances, minimizing the seam between the two pieces.

This design also enables an interesting possibility: modularity. The basic idea is to swap the G5’s chin section for a module that adds some new functionality. The first two modules include the LG CAM Plus (shown above), which gives the G5 a point-and-shoot form factor by adding a hand grip with dedicated shutter and video recording buttons and a wheel for controlling the digital zoom as well as 1200mAh of additional battery capacity, and the LG Hi-Fi Plus with B&O PLAY, which includes a 32-bit Hi-Fi DAC supporting 32-bit 384KHz HD audio playback. Neither is particularly compelling—Is carrying around an extra camera module that provides a better grip and some extra runtime any better than carrying around a small point-and-shoot camera that can take better pictures?—but LG’s HDK and SDK opens up the G5 to third-party modules; however, it seems unlikely that many companies will invest the resources to develop modules that will only work with one phone that’s unlikely to see the sales volume of an iPhone or Galaxy device. LG’s modular phone concept might take off, but we would not recommend buying the G5 on the hope that additional modules will materialize in the future. It’s also worth mentioning that swapping modules means removing the battery, resulting in a small time penalty as the phone reboots after snapping in the new module.

The G4’s sharper corners tend to dig into the palm of the hand. LG addresses this issue by giving the G5’s corners a larger radius, which makes the G5 much more comfortable to hold. The rounder corners also make it easier to reach more of the screen; it’s still not possible to reach the top without changing your grip, though, so the G5 still requires two hands sometimes.

Unlike the iPhone 6s or several other devices we’ve seen recently, the G5 does not use 2.5D glass on the front. Instead, the G5 uses LG’s 3D Arc Glass that adds a large curve only along the top edge. At first this seemed like a superfluous design flourish. Curved sides make edge swipes feel smooth, but your thumb rarely swipes down from the very top edge. It was not until I made a phone call that I realized the utility of this curve: It makes the phone very comfortable to hold against your ear. The same is true for 2.5D glass as well, but the G5’s larger, more gentle curve rests more naturally against the ear, making it easier to position the earpiece correctly. It’s a design element that I’ve come to really appreciate.

The 3.5mm headphone jack migrates from the bottom of the G4 to the top of the G5. There’s also an IR blaster and a noise cancelling microphone. A USB Type-C port is centered on the bottom edge, flanked by another microphone and the single, mono speaker.

The sides of the G5 are slightly tapered and rounded, which improves grip compared to the perfectly rounded sides on the iPhone 6s. At the bottom of the left edge is the aforementioned flush-mounted button to release the lower chin section along with a single-piece volume rocker closer to the top. The volume rocker is held firmly in place so it does not rattle, and, because it’s nearly flush with the side, it’s difficult to press accidentally. There are no controls on the right edge, just a combo tray for the Nano SIM and microSD cards, which sit side by side.

Instead of a curved back like the G4, the back of the G5’s unibody is flat, which makes it easier to use when it’s resting on a table. The back edges are slightly curved, similar to the Galaxy S7 edge, improving the in-hand feel. A polished ring around the perimeter adds a touch of flair, but the most prominent feature around back is the slightly raised, pill-shaped camera unit. Sitting between the two different camera lenses are the LED flash, color spectrum sensor, and laser autofocus module. Just below the camera unit is a circular touch-based fingerprint sensor that pulls double duty as a clickable power button. It's also slightly raised, which makes it easier to locate, and makes a solid click when pressed. Both the camera unit and power button are wrapped with a generous radius, blending them into the body and contributing to the phone’s smooth, rounded appearance.

One thing we do not see on the back are plastic antenna lines, which LG hid below the surface in a somewhat controversial manner. While the G5’s unibody is made from an aluminum alloy called LM201, some consumers are upset that their fingers never actually touch the metal. In order to hide the antenna lines, which are applied to the exterior of the aluminum case, the phone is coated with a gray primer and then painted with a pigment containing small metal particles in a process LG calls “microdizing.” This finish is quite convincing and looks very nice. Other than the plastic insert on the front of the chin section, the G5 is an all-aluminum phone, and to label it anything else based on the finish applied is rubbish. A car’s metal body panels are coated with primer and paint, but we do not say the car is made from plastic or that its body is not all-metal (although, most modern cars include body panels made entirely from plastic or composite materials so this might not be the best analogy). Our only concern about the G5’s painted finish is durability; will the paint scratch off easily? We have yet to drop or otherwise abuse our review units, so we cannot say.

The G5’s microdizing finish comes in four different colors: Silver, Titan, Gold, Pink. The image at the top of this page shows our Titan (gray) review unit next to the lighter Silver color, while the image below shows the (ubiquitous) Gold and Pink options. Some colors are not available in all markets or through all carriers. In the U.S., for example, both AT&T and Sprint offer all four colors, T-Mobile offers Silver and Gold, and Verizon offers Silver and Titan. The G5 is also available from the major Canadian carriers but apparently not in the Gold color. 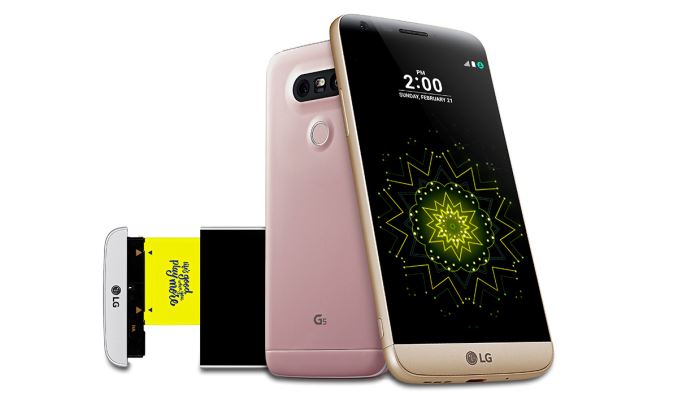 I think the G5 is a decent looking phone; it’s not as flashy as the S7 nor as distinct as LG’s G4, but its smooth appearance has grown more appealing over time. Its most distinguishing feature is the dual camera unit on the back. While walking around a touristy spot in Shanghai randomly taking pictures, one local man knelt down on the ground in front of me just to see what phone I was using. Apparently the dual camera caught his eye.