The design and build quality of the Mate 9 is very similar to the Mate 8. It still uses an aluminum unibody construction that gives it a stiff, solid feel that’s atypical for such a large phone. With a reduction in screen size from 6 inches to 5.9 inches, the Mate 9 is ever-so-slightly shorter and narrower than the Mate 8, but make no mistake, it’s still a big phone. And at 190 grams (up from the Mate 8’s 185 grams), it’s also pretty hefty. I would not call the Mate 9 fat or heavy, though, because its 7.9 mm thickness, the same as Samsung’s Galaxy S7, is reasonably thin and its weight is appropriate for a phone of its size and sturdy metal construction. It wears its weight well too, distributing its mass pretty evenly with a slight bias towards the bottom that makes it easier to hold with only one hand—the top of the phone does not tip out of your hand even when held with a light grip. The rounded corners do not dig into the palm and the chamfered edges provide some extra grip, making the Mate 9 surprisingly comfortable to hold one-handed for its size (at least for someone with big hands). 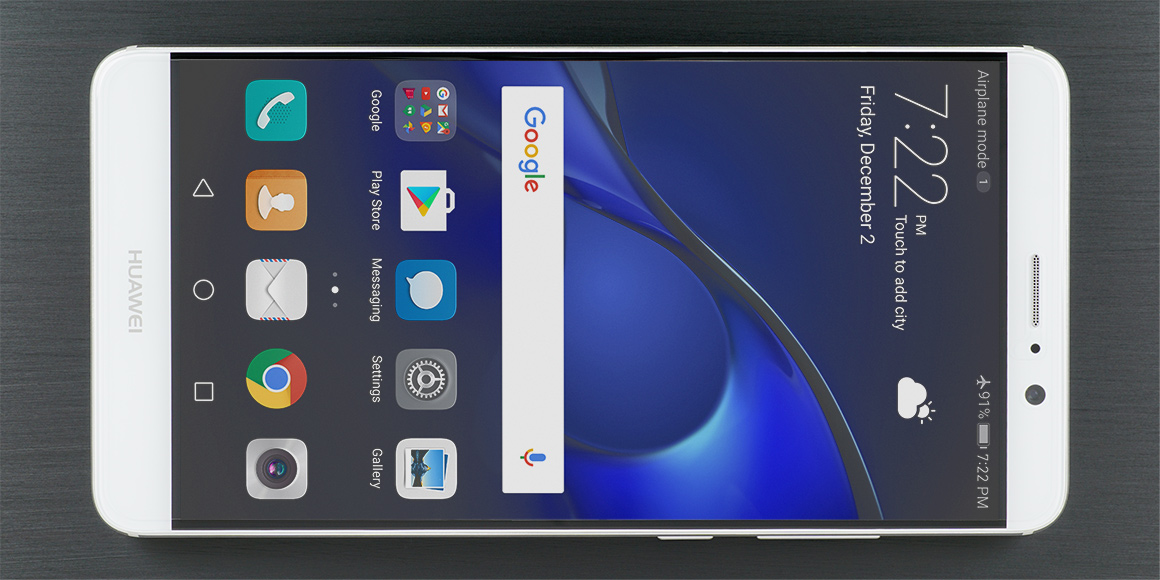 The glass-covered front is dominated by the large screen that spans the entire width. The lack of side bezels and the thin upper and lower bezels give the Mate 9 an excellent screen-to-body ratio. Unfortunately, it still has a 1.5 mm black border around the active portion of the display like the Mate 8. This black frame is just thick enough to be distracting and detract from the phone’s otherwise premium look.

Centered above the display is the phone’s earpiece, which is a bit small for such a large phone. The proximity/ambient light sensor, front-facing camera, and a small LED hidden behind the bezel, which lights up when notifications are received or when charging, are positioned to its right (in that order). This biased layout of circular features progressing from medium to large to small seems like a minor design oversight for a flagship phone and will not impress symmetry fans. The only feature below the display is a small, chrome Huawei logo. 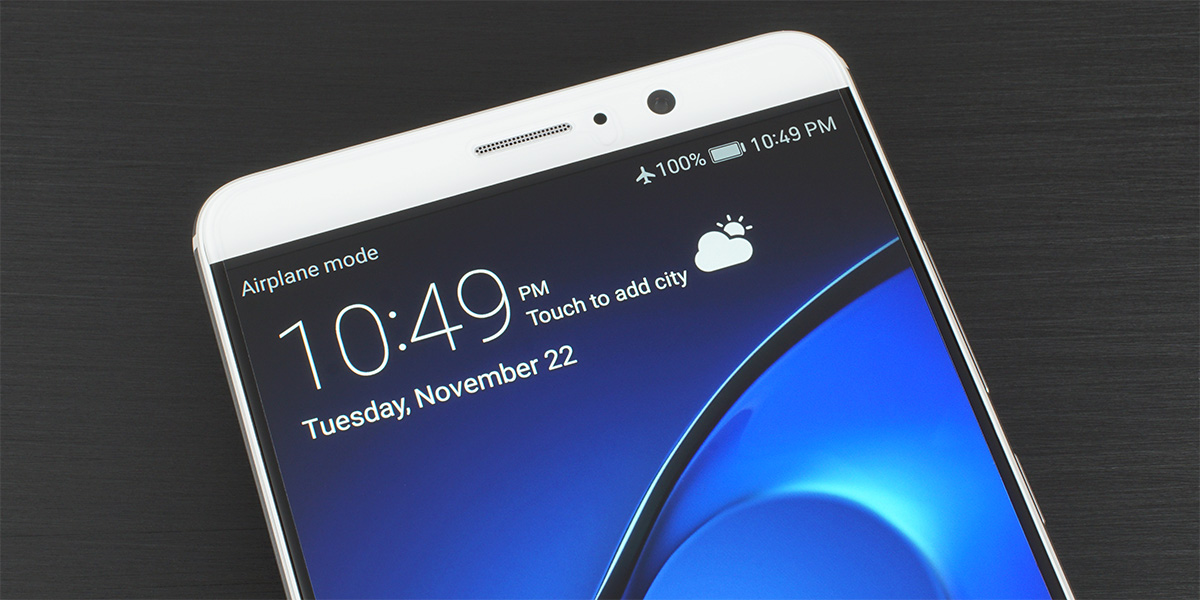 There’s one additional feature on the front of the Mate 9: a preinstalled plastic screen protector. It’s a nice touch and saves you the trouble of adding one yourself; however, it does not extend all the way to the edges of the glass, and it also attracts fingerprints much more readily than glass, so the screen fills up with smudges and fingerprints really quickly.

The sides of the Mate 9 are slightly curved, a small deviation from the Mate 8’s flat sides. There’s a small, polished chamfer between the sides and the back and a larger one to ease the transition with the front glass. These changes, along with the more-rounded corners, improve the in-hand feel, eliminating the Mate 8’s sharper edges and overall boxy feel. The metal’s brushed finish is also less pronounced, matching more closely with the smooth, sandblasted finish on the back.

The power button and single-piece volume rocker are located on the right side. Because they are mounted above the midpoint, I did not experience any issues with accidental button presses while handling or picking up the phone. When holding it in one hand, I can easily reach the power and volume down buttons, but I need to shift the phone in my hand to turn the volume up. People with smaller hands should still be able to reach the power button, but reaching the volume rocker will require a change in grip. Pressing the buttons results in an acceptably solid click, and while the power button shares the same smooth texture as the volume rocker, there’s no issue locating them based on size. 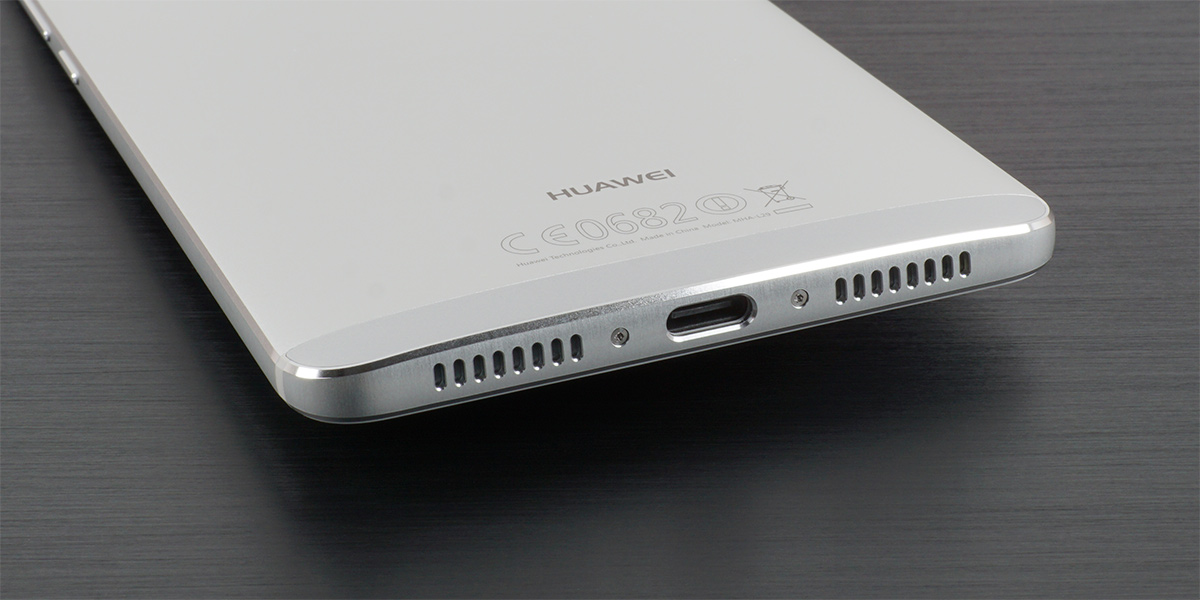 The centered USB 2.0 Type-C port on the bottom edge is flanked by a series of vertical slits acting as speaker grills. The single downward-firing speaker sits behind the right grill, while a microphone hides behind the left grill. The edges of all the openings are finished with a nice polished chamfer. Huawei still sees value in keeping the 3.5mm headphone jack and places one up top. There’s also an IR blaster that works with Huawei’s included “Smart Controller” app for controlling AV equipment. 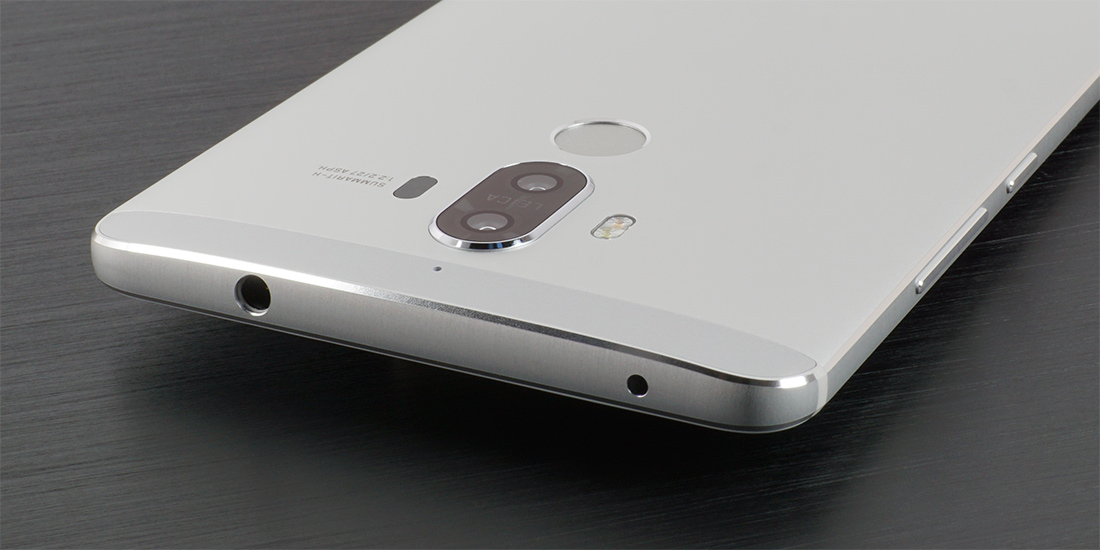 The phone’s back is slightly curved—just enough to make it more comfortable to hold and to make it rock a little when tapping the sides of the screen with it sitting on a table. My biggest design complaint, though, are the plastic inserts at the top and bottom. These antenna windows are a carry-over from the Mate 8 and detract from an otherwise quality build. The color of the plastic is not an exact match with the aluminum, so they draw your attention more so than standard plastic antenna lines (which are still visible on the Mate 9’s sides). They ruin the back’s otherwise smooth appearance and look cheap. 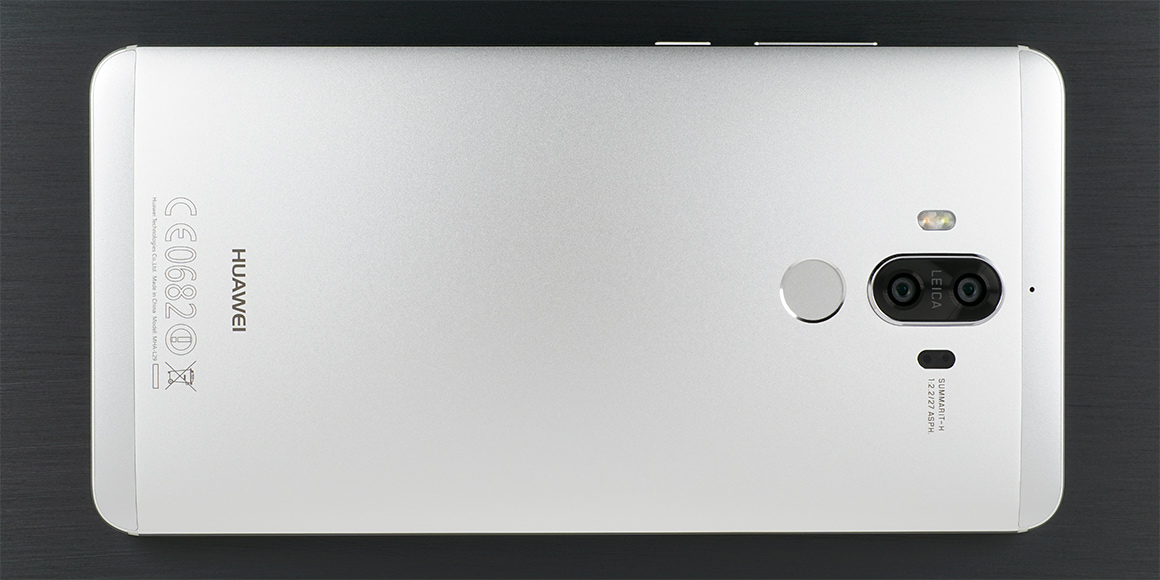 Huawei continues its tradition of placing a capacitive, touch-based fingerprint sensor on the back. The circular sensor is slightly recessed to make it easier to find and is accentuated by a polished chamfer that’s consistent with the phone’s other polished highlights. Its location near the top edge is just about perfect for my index finger, but people with smaller hands may struggle to reach it. The sensor itself is also rather small, noticeably smaller than the Mate 8’s and drastically smaller than the Google Pixel’s sensor. Its small size makes it more difficult to locate and also makes swipe gestures (covered in the software section) more difficult to execute. I suspect the smaller size is a concession to make room for the larger dual-camera module without encroaching upon the battery’s volume. If so, I would gladly trade an extra 1-2 mm in height, which would hardly be noticeable on such a large phone, for a larger, easier-to-use fingerprint sensor.

While size is lacking, performance is not. Placing a finger on the sensor instantly wakes up the phone and unlocks the screen. Subjectively, this feels like the fastest fingerprint sensor I’ve ever used. You do not even need to hold your finger against the sensor; simply brushing your finger past the sensor, without even a pause, unlocks the phone. This partially compensates for the sensor’s small size, because a finger does not need to hit it precisely. Just slowly swipe a finger across the back of the phone instead. Accuracy is also excellent, and it’s very forgiving with finger placement and orientation. 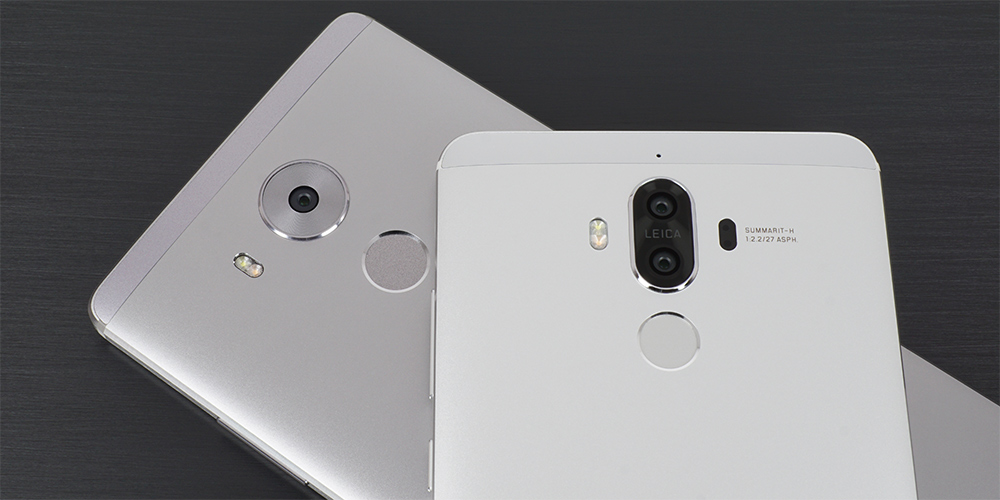 The new vertically stacked dual-camera module is the Mate 9’s visual highlight. Raised just above the back surface and surrounded by a polished chamfer, it uses different shades of black and a subtle ringed texture to help the camera lenses stand out. The appropriately sized, pill-shaped module is flanked by the dual-color LED flash and the laser AF module.

The Mate 9 comes in five colors: Space Grey, Moonlight Silver, Mocha Brown, Champagne Gold, and Ceramic White. The front bezels of the silver and white models are white, while the other variants have color-matching bezels. Inside the box is a clear plastic case that will keep the back and corners from getting scratched, but I doubt it will keep the phone’s screen from shattering if dropped.

While the Mate 9 Pro gets a curved screen, front-mounted fingerprint sensor, and reworked antenna lines, the Mate 9 simply recycles the Mate 8’s design. The camera module is new and improved, and a few small tweaks make the Mate 9 more comfortable to hold. But Huawei failed to address the Mate 8’s most obvious design issues: the black frame around the display and the cheap looking plastic antenna windows. Attention to detail defines a flagship product, and these are two very obvious details it missed.