We measure GPU power consumption using a method that’s similar to what we use for the CPU. Running the GFXBench Manhattan 3.1 and T-Rex performance tests offscreen, we calculate the system load power by subtracting the device’s idle power from its total active power while running each test, using each device’s onboard fuel gauge to collect data.

The Mate 9’s 8.63W average is easily the highest of the group and simply unacceptable for an SoC targeted at smartphones. With the GPU consuming so much power, it’s basically impossible for the GPU and even a single A73 CPU core to run at their highest operating points at the same time without exceeding a 10W TDP, a value more suitable for a large tablet. The Mate 9 allows its GPU to hit 1037MHz too, which is a little silly. For comparison, the Exynos 7420 on Samsung’s 14LPE FinFET process, which also has an 8 core Mali GPU (albeit an older Mali-T760), only goes up to 772MHz, keeping its average power below 5W.

The Mate 9’s average power is 3.1x higher than the Mate 8’s, but because peak performance goes up by the same amount, efficiency turns out to be equal. Qualcomm’s Adreno 530 GPU in Snapdragon 820/821 is easily the most efficient with this workload, and despite achieving about the same performance of Kirin 960, it uses less than half the power.

Things only get worse for Kirin 960 in T-Rex, where average power increases to 9.51W and GPU efficiency drops to the lowest value of any device we’ve tested. As another comparison point, the Exynos 8890 in Samsung’s Galaxy S7, which uses a wider 12 core Mali-T880 GPU at up to 650MHz, averages 4.7W and is only 12% slower, making it 78% more efficient.

All of the flagship SoCs we’ve tested from Apple, Qualcomm, and Samsung manage to stay below a 5W ceiling in this test, and even then these SoCs are unable to sustain peak performance for very long before throttling back because of heat buildup. Ideally, we like to see phones remain below 4W in this test, and pushing above 5W just does not make any sense. 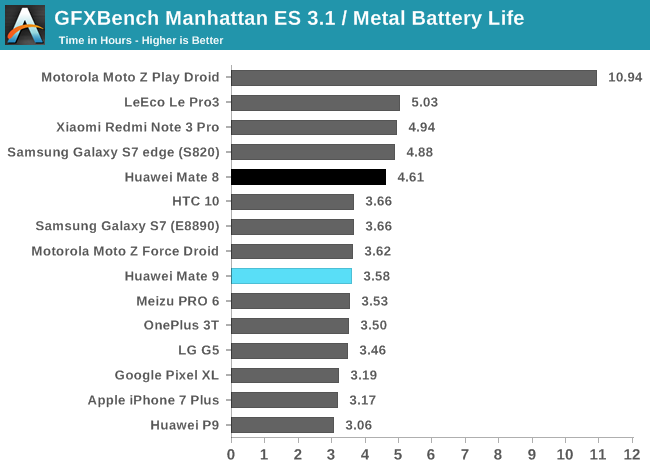 The Kirin 960’s higher power consumption has a negative impact on the Mate 9’s battery life while gaming. It runs for 1 hour less than the Mate 8, a 22% reduction that would be more pronounced it the Mate 9 did not throttle back GPU frequency during the test. Ultimately, the Mate 9’s runtime is similar to other flagship phones (with smaller batteries), while providing similar or better performance. To reconcile Kirin 960’s high GPU power consumption with the Mate 9’s acceptable battery life in our gaming test, we need to look more closely at its behavior over the duration of the test. 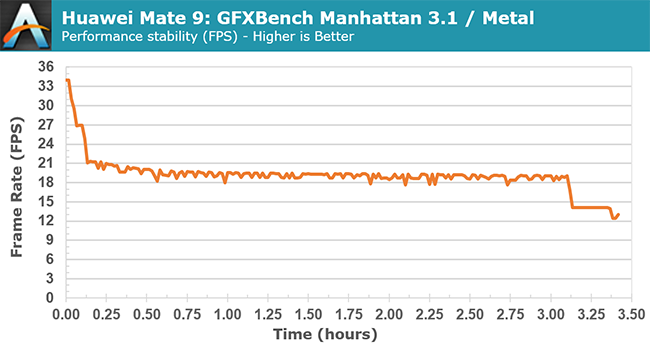 The Mate 9 only maintains peak performance for about 1 minute before reducing GPU frequency, dropping frame rate to 21fps after 8 minutes, a 38% reduction relative to the peak value. It reaches equilibrium after about 30 minutes, with frame rate hovering around 19fps, which is still better than the phones using Kirin 950/955 that peak at 11.5fps with sustained performance hovering between 9-11fps. It’s also as good as or better than phones using Qualcomm’s Snapdragon 820/821 SoCs. The Moto Z Force Droid, for example, can sustain a peak performance of almost 18fps for 12 minutes, gradually reaching a steady-state frame rate of 14.5fps, and the LeEco Pro 3 sustains 19fps after dropping from a peak value of 33fps.

In the lower chart, which shows how the Mate 9’s GPU frequency and power consumption change during the first 15 minutes of the gaming battery test, we can see that once GPU frequency drops to 533MHz, average power consumption drops below 4W, a sustainable value that still results in performance on par with other flagship SoCs after they’ve throttled back too. This suggests that Huawei/HiSilicon should have chosen a more sensible peak operating point for Kirin 960’s GPU of 650MHz to 700MHz. The only reason to push GPU frequency to 1037MHz (at least in a phone or tablet) is to make the device look better on a spec sheet and post higher peak scores in benchmarks.

Lowering GPU frequency would not improve Kirin 960’s low GPU efficiency, however. Because we do not have any other Mali-G71 examples at this time, we cannot say if this is indicative of ARM’s new GPU microarchitecture (I suspect not) or the result of HiSilicon’s implementation and process choice.