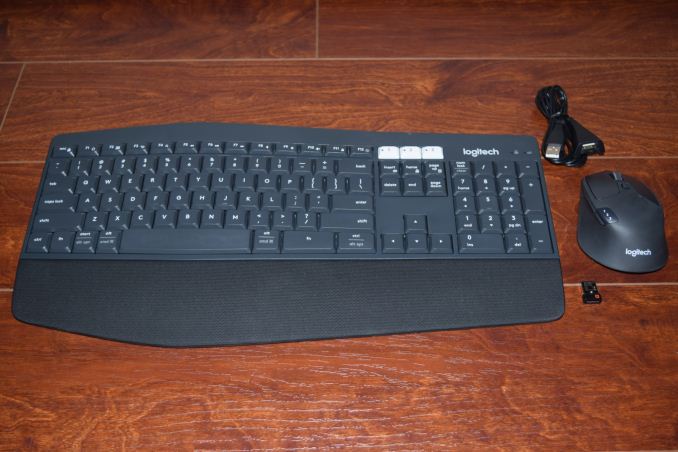 We have been reviewing Logitech's multi-device wireless input peripherals for a few years now. The Logitech K480 was launched in 2014, and the Logitech K780 and M720 keyboard and mouse were launched last year. The K780 and M720 Triathlon were separate products. The success of these input peripherals has prompted Logitech to introduce the MK850 Performance combo - a full-length multi-device wireless keyboard along with the wireless M720 Triathlon mouse. The combo is made more powerful by the DuoLink feature - using the keyboard to alter the functionality of the mouse buttons and gestures.

The Logitech MK850 Performance combo comes with a single Unifying USB receiver. Logitech also bundles a USB extender for use-cases where the placement of the spare USB port in the PC might result in spotty wireless performance. The combo can be paired with up to three different host devices and easily switch between them. The hosts can be Android, iOS, Mac or Windows devices, and the keys in the keyboard get automatically re-mapped depending on the host OS. Both the mouse and the keyboard have explicit on/off buttons in order to conserve battery life. The keyboard needs 2xAAA batteries, while the mouse needs a single AA battery. Logitech claims battery life of two years for the mouse and three years for the keyboard.

We had talked about how the K780 keyboard addressed the shortcomings of the K480 keyboard. The keyboard component of the MK850 adds a number of interesting features.

Users of the K480 and K780 have appreciated the ability to use the cradle to keep their smartphones in an accessible location while using their computers. The MK850's keyboard, however, doesn't have a cradle for mobile devices. 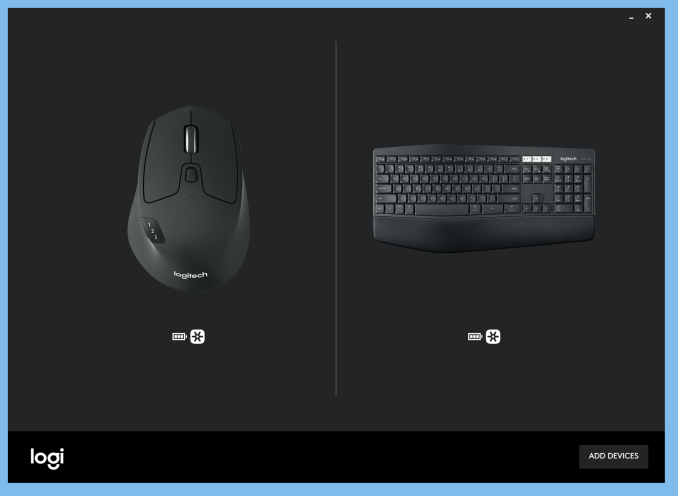 The options available for the mouse (standalone) are an exact replica of what we saw in the M720 Triathlon review. Out of the 8 buttons in the mouse, two (the one behind the scrollwheel that controls the rate at which it moves, and the one that switches the host device to which the mouse is paired) can't be remapped. Everything else can be configured using the Options software.

The left and right buttons can be swapped. The pointer speed can be finely adjusted and the scrollwheel direction can also be swapped. The mouse also has a gesture button below the three raised buttons on the left side. The scrollwheel can be swayed right or left for horizontal scrolling (on mobile devices, that acts similar to swiping right or left on the touchscreen). Along with the device change button, we also have the Forward and Back buttons on the left. The scrollwheel can itself act as a middle mouse button. All of these can be mapped to one of a variety of Windows actions. 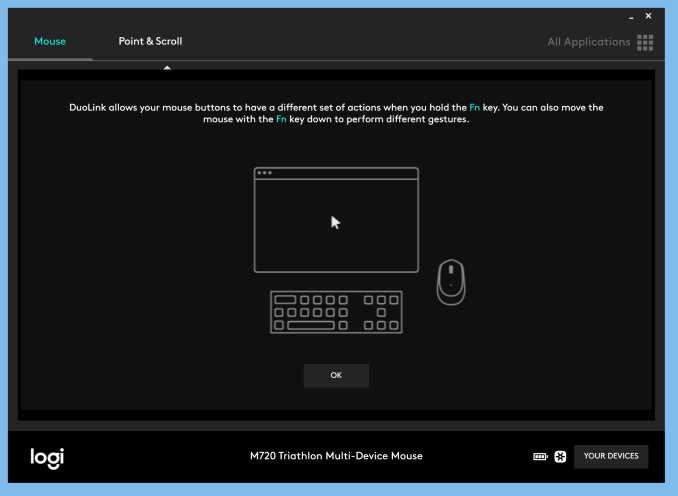 Activating the Options software when the K850 Performance keyboard as well as the M720 Triathlon mouse are connected provides users with the ability to configure the DuoLink features. The option panels associated with the mouse have a 'Default' and a 'Fn' mode, with the latter configuration intended for activation by pressing the Fn key on the keyboard along with the relevant mouse event.

The K850 Performance's options include the ability to keep the keyboard always in the Windows layout and the option to use the F1-F12 keys as standard function keys (without using the Fn. key qualifier). The configurable keys include the Home button, F1 through F4, F11, and F12. They can be mapped to a variety of Windows functions / programs such as closing windows, Cortana, Calculator etc.

The MK850 Performance wireless keyboard and mouse combo is an important addition to the set of multi-device I/O peripherals from Logitech. They work as advertised, and there is really not much to complain about, except for the lack of a cradle in the keyboard. As mentioned earlier, the K850 Performance keyboard is a huge improvement over the K480 and K780. Evaluation of keyboards and mice targeted towards day-to-day / casual usage is an inherently subjective exercise. In the table below, we compare the specifications of the MK850 Performance combo with some of the other keyboard / mice combos that we have evaluated with a similar approach before. Some subjective scores have also been provided.

While it is difficult to find scope for improvement in the M720 Triathlon, the K850 Performance keyboard's appeal can be enhanced by the addition of a cradle to the design, as well as making the palm rest detachable. As a combo, the whole is more than the sum of parts, thanks to the DuoLink features.