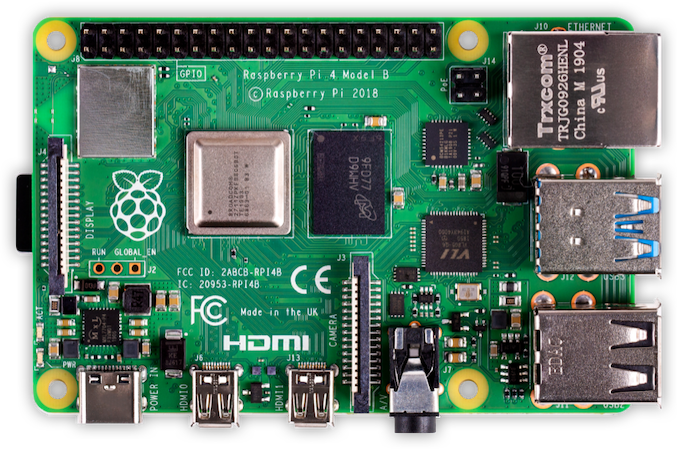 This morning the Raspberry Pi Foundation took the wraps off of their next generation hobbyist project computer, the Raspberry Pi 4. The eagerly anticipated update to the Raspberry Pi lineup – which is actually arriving a bit ahead of schedule due to some good fortunes in SoC development – offers a significant upgrade to the family thanks to its new 28nm Broadcom SoC, which among other things incorporates a more powerful quad Arm Cortex-A72 CPU cluster. The single-board computer is available now, and like its predecessors, prices start at $35.

Long a favorite for tinkers, makers, and anyone else looking for a project board or a simple computer, the Raspberry Pi family has been around since 2012. Its last full update was in 2016, when the Foundation released the Raspberry Pi 3. In the intervening three years the technology landscape has changed a fair bit, and so has the underlying hardware of the Pi. While still based on Broadcom SoCs, the new Pi incorporates Broadcom’s BCM2711, a 28nm SoC with a quad Cortex-A72 setup along with the company’s VideoCore VI GPU. While the GPU remains nothing to write home about – the Raspberry Pi Foundation prioritizes an open GPU first and foremost – the CPU upgrade is far more interesting. This update replaces the old Cortex-A53 CPU cores with cores from Arm’s much faster high-performance line of out-of-order execution cores. As a result, even with a clockspeed of just 1.5GHz, the Pi 4 is a good deal faster than the Pi 3, not to mention faster than even some mid-range smartphones.

I/O has also received a much-needed upgrade for the latest Pi. The new SoC brings with it USB 3 support, giving the platform access to SuperSpeed USB data rates for the first time. HDMI support has been similarly bumped to 2.0 (meaning 4K output support), and fittingly, the board can now decode H.264 and H.265 video (another first) at resolutions up to 4K. Networking performance has been upgraded as well with the addition of a full-speed Gigabit Ethernet port, and joining the 802.11ac radio is support for Bluetooth 5.0.

All told, the Foundation is selling 3 different versions of the Raspberry Pi 4, depending on the memory configuration. The $35 model comes with 1GB of LPDDR4, while 2GB and 4GB models are available for $45 and $55 respectively. Which in the case of the latter two models is a significant shot in the arm for the board, as now they have two to four times the memory to play with.

Meanwhile, our sister site Tom’s Hardware already has an early review out, confirming much of what you’d expect from the Raspberry Pi 4 based on the specifications. CPU, memory, and storage performance are all greatly improved over past models, though power consumption has gone up a bit in the process.