Last week Huawei launched its latest flagship smartphone, the Mate 30 Pro, featuring its latest Kirin 990 chipset. At the heart of the new hardware is a waterfall wrap-around screen, as well as new camera tools to help it record slow motion video up to 7680 frames per second, above and beyond what is currently available. The new smartphones will not come with the Google Play Store and applications, due to the US-China trade war and Huawei being placed on the US Entity List, however Huawei has promised to look into unlocking the boot loader and injecting $1B into its own App Store to drive new applications. 5G versions of the Mate 30 and Mate 30 Pro are due out later this year, but we managed to get access to a device for a day or so for some hands-on experience.

*For disclosure, in this mini-test we have a pre-production Chinese sample. The software is not yet in its current and final shipping state, and may differ compared to the launch version.

As with the most recent Huawei flagship devices over the past couple of years, the Mate 30 Pro is a hard device to ignore. With the trend of full-screen displays going beyond the edge of the device itself, Huawei has pushed its high-end device with a true wrap-around edge experience. This new ‘waterfall’ display, or ‘Horizon Display’, features an 88-degree curve at the edge, making its way half-way down the edge of the display.

The other query with this display might be how it feels to hold. I’ll be honest, it does feel a little more slippery than the standard sides of a phone, but not to the point where it drastically changes the way a phone is normally held.

The 6.53-inch Flex OLED display actually comes in at an odd resolution, 2400x1176, giving an aspect ratio of 18.4:9, because Huawei is counting that additional edge display. I’ve noticed that most apps, even Huawei’s own apps, seem to ignore the edges pretty much, and just focuses on a 2400x1080 style implementation for a 20:9 experience. As we can see from this image, the 'black' areas in the corners are where this application isn't even bothering to detect and cover up.

I will say though that I experienced very few ghost taps with the display. It barely recognized any feint taps on the edges, which suggests that Huawei’s false detection algorithms are working really well. 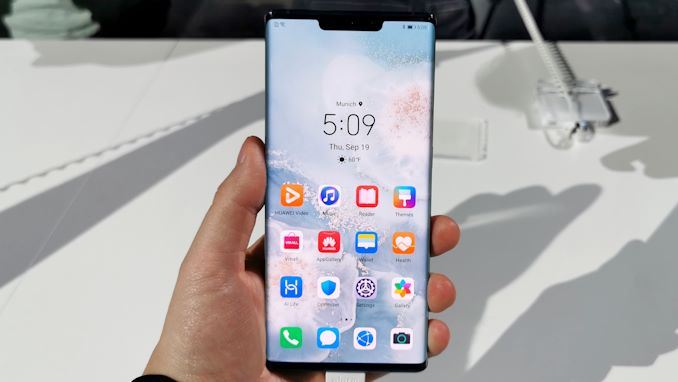 At the top of the display is the notch, which houses several cameras: a gesture sensor, two 3D depth cameras, an ambient light/proximity sensor, and a 32MP f/2.0 front-facing selfie camera. This comes with a portrait mode, supporting bokeh effects, but Huawei has also enabled gesture control, such that users can take screenshots or scroll webpages without actually touching the phone. Personally I find gesture controls a little gimmicky still, so I have not used them.

The rear of the device holds the main cameras, which for this smartphone Huawei is calling its ‘SuperCine’ orientation, to add Cinematography-class quality to a smartphone. The four cameras are aligned in a 2x2 grid and surrounded by a ring, designed to look like a more expensive camera arrangement when the smartphone is held horizontally.

For the Mate 30 Pro, Huawei uses the top left for 3D depth sensing, the top right is an ultra-wide 40MP f/1.8 camera, the bottom left is a 40MP f/1.6 camera with OIS, and the bottom left is an 8MP f/2.4 telephoto camera and lens, also with OIS. The whole camera system supports AI stabilization techniques, as well as ISO 409600, and video bokeh. The telephoto camera enables a 3x optical zoom, and a macro mode allows for 2.5cm close up shots.

The key thing about this arrangement is the dual 40MP cameras. The 40MP ultra-wide Cine camera is an RGGB sensor, and is paired with the 40MP SuperSensing (4-in-1 pixel binning) RYYB sensor. The Cine camera supports 4K60 video, with an ISO of 51200, 4K HDR+, real-time video bokeh, and a new super-slow motion mode up to 7680 fps. The 7680 fps I’ve tested in a couple of demo videos later on.

The Mate 30 Pro comes in an offering of six colors, with four standard colors (Space Silver, Emerald Green, Cosmic Purple, and Black) and two classified as ‘Vegan Leather’ (Forest Green and Orange), which are essentially some up-market PU leather made from plastic.

The Emerald Green one is special in that it features a gloss-to-matte gradient finish. The rear of the device at the bottom feels like a Huawei laptop, with its metallic alloy soft touch, and then as you move up the device, it turns into a glass feeling smartphone. The idea here according to Huawei is to give it a unique texture that also doesn’t put fingerprints where people usually hold phones. It’s a bit hard to demonstrate without actually feeling it for yourself though. We can kind of see the textured surface with a high powered light:

The Mate 30 Pro doesn’t have a 3.5mm jack (the Mate 30 does), but does have a USB Type-C connector and an IR blaster. Compared to the P30 Pro I have been using as my daily driver for the last few months, the Mate 30 Pro looks slightly wider due to the display, and the grip is near equal. I typically use the P30 Pro with a case, but the Mate 30 Pro sample we were given for review did not have one.

Read the following pages where we cover some Kirin 990 performance, camera and video, as well as all the technical details.