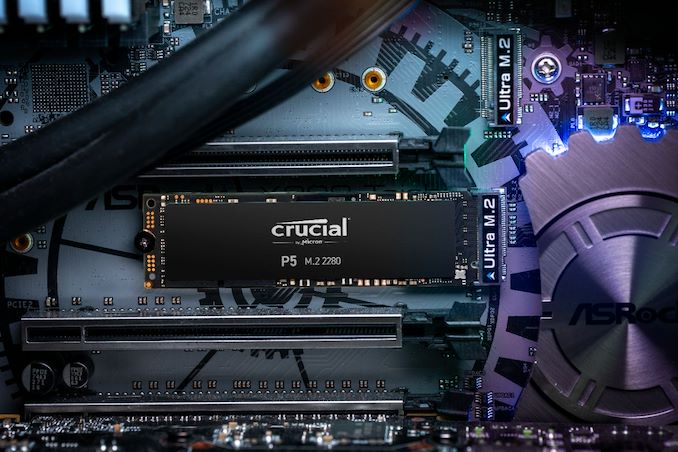 Micron's consumer brand Crucial has introduced two new NVMe SSD product lines, including their first high-end NVMe SSD which features Micron's in-house SSD controller design. However, Crucial's adoption of NVMe continues to lag behind most brands as both new models are still using PCIe 3 interfaces while the high-end market is migrating to PCIe 4.

The Crucial P5 is the first retail SSD to use a controller designed by Micron. Their in-house SSD controller design efforts date back at least as far as their 2015 acquisition of Tidal Systems, but the first product with a Micron-designed SSD controller only showed up a year ago: the Micron 2200 series client OEM SSD. The Crucial P5 is a clear step up from that, but still uses a PCIe gen3 interface, so it won't be setting any performance records and will face an increasing number of PCIe gen4 competitors as the year goes on. However, it should still deliver solid performance for all but the most demanding prosumer use cases, especially since it looks like Intel won't be offering PCIe gen4 host support this year. The P5 also includes support for all the usual encryption standards, features that are missing from many high-end NVMe SSDs that target the consumer market exclusively and not business customers.

The Crucial P2 is their second entry-level NVMe SSD, but it is not a direct replacement for the QLC-based P1. The P2 is at least initially only available in low capacities of 250GB and 500GB, and cuts costs by using a DRAMless controller with TLC NAND rather than the P1's combination of cheaper QLC NAND but a controller with a DRAM cache. Micron hasn't disclosed what controller is used on the P2, but it seems likely they're sourcing from a third party as with previous Crucial SSDs—and it might not even be the same controller for both capacities. While both capacities have performance specs that fall within the ranges we expect for a four-channel DRAMless NVMe SSD, the 500GB model is actually the slower one by most metrics.  This indicates that at least one of either the NAND or the controller is meaningfully different from the 250GB model. The 500GB might be using NAND parts with a higher per-die capacity and thus not have any greater parallelism, or it may be using an entirely different controller (or both). The 500GB model's endurance rating is also the same 150TB as the 250GB model, which puts it in QLC territory (though still better than the 500GB P1's 100TBW rating).

Micron's press release for the P2 mentions that it will be available in capacities up to 1TB, but the spec sheets make no mention of the 1TB model. This may be another situation like the 2TB Crucial P1 that was announced as coming a bit later than the rest of the lineup, but never hit the market.

Micron has confirmed that both the P2 and P5 are currently using their 96L 3D TLC NAND, but they reserve the right to change that in the future. It's unlikely that the P5 will be switched to QLC NAND, but much like the MX500 SATA drive this model might stick around for years even after a replacement with a faster interface (PCIe 4) is introduced. In that case, it would be reasonable to expect the P5 to be updated with a newer generation of TLC NAND, and performance probably won't change significantly. The P2 product line could easily become a mix of TLC and QLC, which Micron has done with the entry-level BX500 SATA SSDs. If/when the P2 gets 1TB or larger capacity options those would seem likely to use QLC NAND, and the 500GB model could probably also be switched to QLC given that its rated performance is not too different from the 500GB P1. We encourage Micron to be more transparent about their controller and NAND choices and especially any post-launch changes.

The Crucial P5 is not yet listed on online retailers, but Crucial.com has the P2 available for direct purchase and it's starting to show up on some online retailers. Launch prices of $55 and $65 are similar to competitors like the WD Blue SN550, but Western Digital has set a performance standard for entry-level NVMe drives which the Crucial P2 may have trouble beating.