The Supermicro SuperServer E302-9D is not a run-of-the-mill server, and its evaluation has to focus on aspects beyond the regular generic testing of the CPU capabilities. The system's focus is on applications requiring a large number of high-speed network interfaces, and our evaluation setup with the server as the device-under-test (DUT) also reflects this.

The E302-9D sports eight network interfaces with four gigabit copper ports, and four 10 gigabit ones. Our testing focuses on the 10 gigabit interfaces. These are connected to the stimulus source and sink in our test network topology. Out of the four gigabit ports, one is connected to the management network, while the other three are left idle. The management network is used to send test commands to the source and the sink, while remotely controlling the DUT configuration.

The stimulus source is the Supermicro SuperServer 5019D-4C-FN8TP, which is the actively cooled 1U rackmount version of the DUT. It uses the same Intel Xeon D-2123IT SoC and the same motherboard. Only the cooling solution and chassis are different. The sink is the Supermicro Superserver SYS-5028D-TN4T, which uses the Xeon D-1540 Broadwell-DE SoC. The conductor (a Compulab fitlet-XA10-LAN unit) is the PC that acts as the master for the framework testing these distributed systems, and acts to synchronize various operations of the members and collect results over the management network. The systems in the above configuration all run FreeBSD 12.1-RELEASE, except for the DUT running pfSense 2.4.5 (based on FreeBSD 11.3). In our initial setup, the sink's native 10GBASE-T ports were connected to the DUT. These ports worked fine with Windows Server 2019 Standard running on the sink. However, with FreeBSD 12.1, only one of the 10GBASE-T ports got initialized successfully, with the other suffering a hardware initialization failure. To circumvent this issue, we installed a spare Intel X540-T2 half-height PCIe 2.0 x8 card in the system's PCIe slot. Strangely, FreeBSD again showed a initialization failure for one of the two new ports. Fortunately, we did end up with two working 10G BASE-T ports in the sink, and I did not have to spend any additional time debugging FreeBSD's refusal to activate those specific interfaces in the Xeon D-1540-based system.

On the DUT side, the interfaces are configured in the pfSense installation as shown in the screenshot below. DHCP servers are activated on all the four 10 gigabit interfaces of the DUT. This configuration is persistent across reboots, and helps in minimizing the setup tasks for each of the performance evaluation runs described further down. 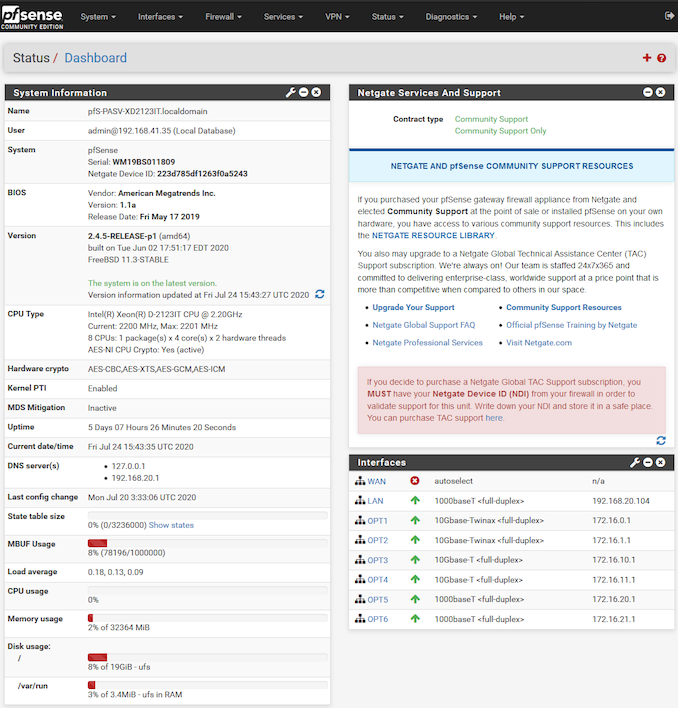 For certain benchmarking scenarios, minor modifications of the interface characteristics are needed. These tweaks are done via shell scripts.

Throughput benchmarks tell only a part of the story. Evaluation of a firewall involves determination of how enabling various options affects the packet processing capabilities. Monitoring the DUT's resource usage and attempting to maximize it with artificial scenarios doesn't deliver much actionable information to end-users. At AsiaBSDCon 2015, a network performance evaluation paper was presented that brought out the challenges involved in creating consistently reproducible benchmarks for firewalls such as pfSense.

The scripts and configuration files for different scenarios in the scheme described above are available under a BSD-2-Clause license in the freebsd-net/netperf github repo. The benchmarks presented in this review are based on this methodology. However, we only take a subset of relevant scenarios for a multitude of reasons - Some of the tests are only relevant to the firewall kernel developers, while some others (such as the comparison between fast-forwarding tunred off and on) are no longer relevant in recent releases of pfSense.

While iPerf3 enables quick throughput testing, pkt-gen helps in evaluating how the firewall performs under worst-case conditions (read, processing of packets much smaller than the MTU).

Evaluation is done in the following scenarios:

In benchmarking configurations, it is customary to ensure that the stimulus-generating hardware is powerful enough to not be the testing bottleneck. One of the fortunate aspects we are dealing with is that networking performance (particularly at 10G+ speeds) hardly benefits from high core-count or multi-socket systems - the performance penalties associated with moving the packet processing application associated with a particular interface to another core or socket becomes unacceptable. Hardware acceleration on the NICs matter more than CPU performance, though higher per-core/single-threaded performance is definitely welcome. In this context, a look at the suitability of the two testbed machines for packet generation and driving is warranted first.