Lian Li Unveils Its First AIO Coolers, The Galahad 360 and 240 with ARGB

Lian Li is highly regarded for its elegant and premium aluminium chassis, most recently its entry-level O11 Dynamic XL E-ATX case, which has become one of its most popular ranges. Its latest product marks the companies first foray into the liquid cooling market with the Galahad AIO series, with two different sizes available, including 240 and 360 mm.

Available in both black and white models, the Lian Li Galahad 360 and 240 mm all-in-one CPU coolers come supplied with addressable RGB LED 120 mm fans, with two supplied with the 240 mm and three with the 360 mm model. The housing of the radiator is constructed from aluminium, while the pump uses a simplistic design with an ARGB ring around the base. The Lian Li 120 mm ARGB fans supplied with both the Galahad models have a variable speed of 800 to 1900 RPM, can operate in PWM or DC mode, and have a rated airflow of 69.17 CFM. 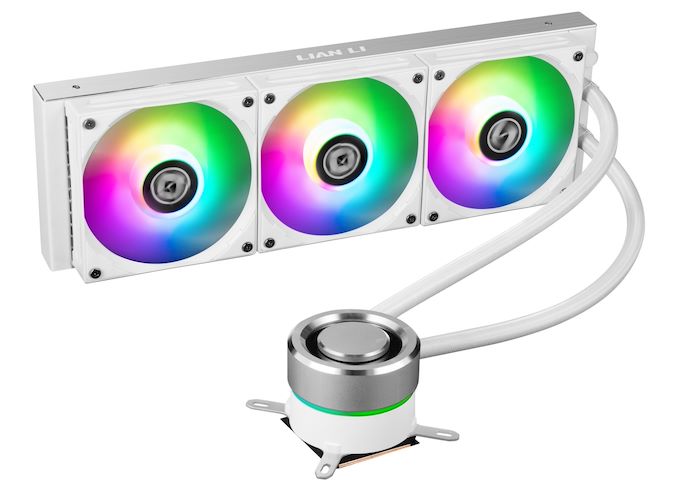 Although Lian Li hasn't provided thermal capabilities of its coolers, both Galahad models come with a versatile mounting kit which includes support for Intel LGA115X, LGA1366, LGA775, and the latest LGA1200 socket. This also includes AMD's AM4 socket, although there is no support for AMD's older chipsets such as AM3 or FM2+. The pump itself is rated at 12 V DC, with Lian Li claiming the Galahad pump operates at less than 20 dBA.

The Lian Li Galahad AIO CPU coolers are currently available to purchase at Newegg, with an MSRP of $150 for the 360 mm version, and $120 for the 240 mm variant. It should be noted that although the pump and radiator unit is backed by a 5-year warranty, the included 120 mm cooling fans only come with a 2-year warranty.