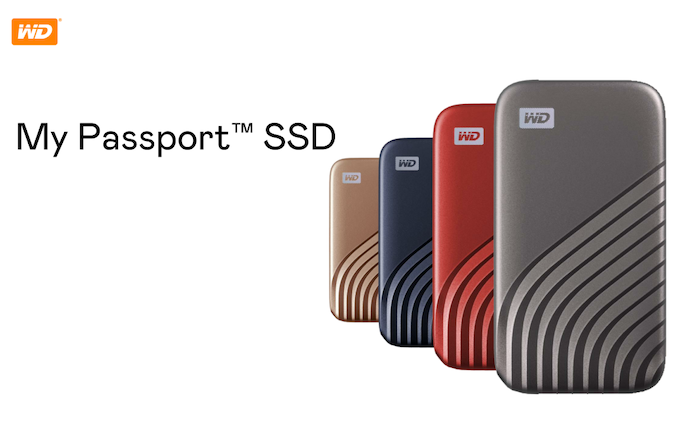 Western Digital's lineup of direct-attached storage (DAS) products targets a range of markets and form-factors. After the acquisition of HGST / G-Technology and SanDisk, the company now offers similar products under multiple brand names. Portable bus-powered SSDs are an example. Subtle differences in the feature sets of the products enhance their appeal to the brand's target market.

Late last year, the WD_Black P50 was introduced as the fastest non-Thunderbolt portable SSD in the market, thanks to its USB 3.2 Gen 2x2 interface. The branding clearly indicated that gamers were the target market. The regular WD branding is reserved for the My Passport series. We reviewed the first model in the My Passport SSD series back in 2017. It used the planar TLC-based SanDisk X400 M.2 SATA SSD internally with a USB 3.1 Gen 2 Type-C host interface. A new version of the My Passport SSD was released the following year with a WD Blue 3D NAND SATA SSD using 64L 3D TLC flash. Both products were held back performance-wise by the use of a SATA SSD. Today's product launch brings NVMe into the picture for the My Passport SSD product line.

The WD My Passport SSD targets productivity use-cases for business professionals (including certain content creators). The new version's industrial design and appearance has changed, with the sharp corners and fully-plastic enclosure now replaced by an aesthetically-pleasing partial metal enclosure having rounded corners. WD claims that the new design feels less rigid and more portable, and has a more pocketable shape overall.

While the WD_Black P50 and the SanDisk Extreme Pro portable SSDs meant for huge games and large media files used the WD Black SN750 NVMe SSD internally, the new WD My Passport uses the DRAM-less WD Blue SN550 NVMe SSD. This still uses a PCIe 3.0 x4 interface, and the performance numbers for the 500GB+ models are good enough to saturate a USB 3.1 Gen 2 interface. Hardware encryption is one of the key features of the higher-end products in the My Passport line-up, and the new My Passport SSD also supports AES-256 for data protection without performance loss. 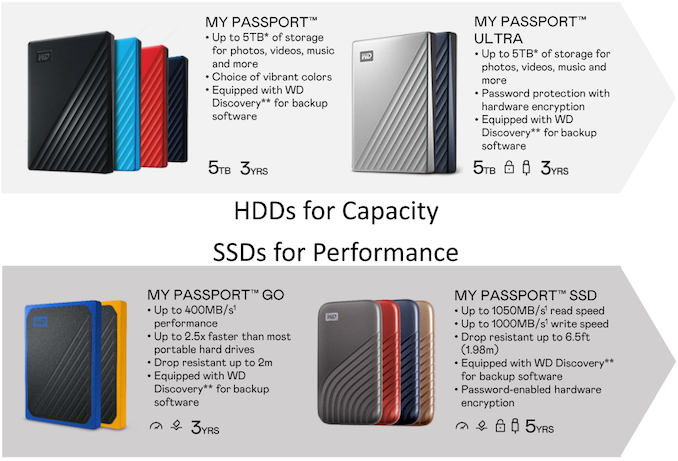 The SanDisk Extreme Pro Portable SSD is our current favorite when it comes to USB 3.1 Gen 2 portable SSDs, thanks to its compact design, performance consistency, and thermal performance. Power consumption (particularly at idle) was one of its Achilles heels compared to the OWC Envoy Pro EX USB-C (which provided similar performance, albeit in a slightly larger form-factor). If the WD My Passport SSD manages to reach close to the SanDisk Extreme Pro's performance profile while also optimizing power consumption, Western Digital may end up with yet another compelling offering in the portable SSD market.