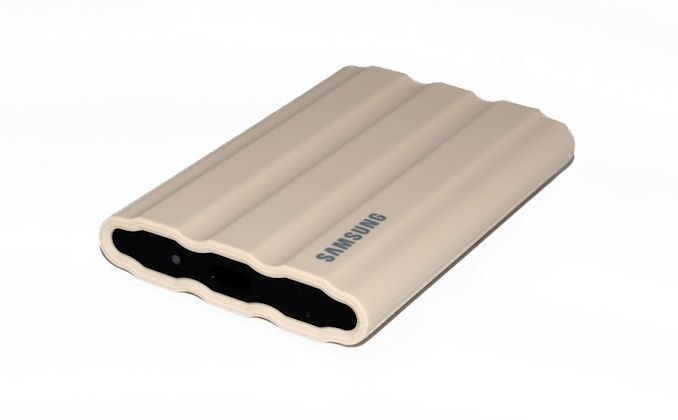 Samsung's lineup of portable SSDs has enjoyed tremendous success, starting with the T1 back in 2015. The company has been regularly updating their PSSD lineup with the evolution of different high-speed interfaces as well as NAND flash technology.

External bus-powered storage devices capable of 1GBps+ performance have become entry-level offerings in the market today. Rapid advancements in flash technology (including the advent of 3D NAND and NVMe) as well as faster host interfaces (such as Thunderbolt 3 and USB 3.2 Gen 2+) have been key enablers. Broadly speaking, there are five distinct performance levels in this market:

The Samsung Portable SSD T7 Shield we are looking at today belongs to the third category in the above list, utilizing a NVMe SSD behind an ASMedia ASM2362 bridge chip. The configuration is quite similar to the Portable SSD T7 (Touch) in terms of the NVMe controller and the bridge chip. There are a few industrial design updates to protect the drive against dust ingress and splashes of water (IP65), as well as lend it an element of ruggedness. The striking externally visible one is the addition of an elastomer covering (available in beige, blue, and black) to the internal metal case. The new casing also has a few ridges that run across the longer side. 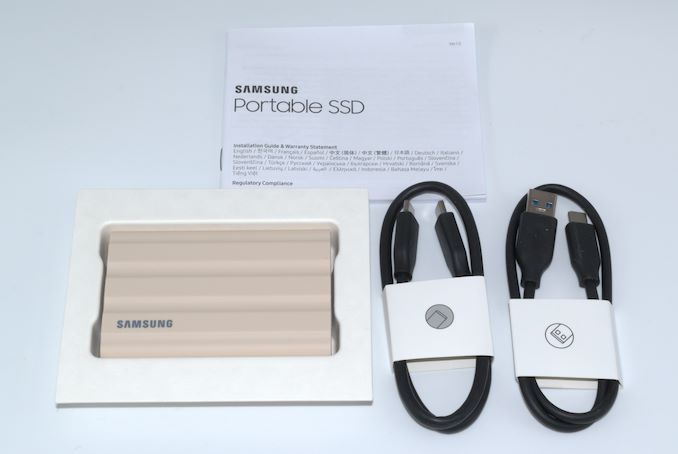 Samsung includes two separate cables - one USB Type-C to Type-A, and another Type-C to Type-C of approximately the same length. Disassembling the unit is fairly trivial after taking out the four screws hidden under the product label stickers on either side, and removing the elastomer covering. This reveals an aluminum metal enclosure. The plastic tray holding the actual PSSD board can then be slid out after the removal of the plastic piece opposite the connector end. Both plastic end pieces have grommets around their periphery to ensure a good seal and contribute to the IP65 rating. The main board is held on to the plastic tray by four smaller screws. The connector on the main board has a red-colored sealing band to ensure that it doesn't become an ingress point for external material. 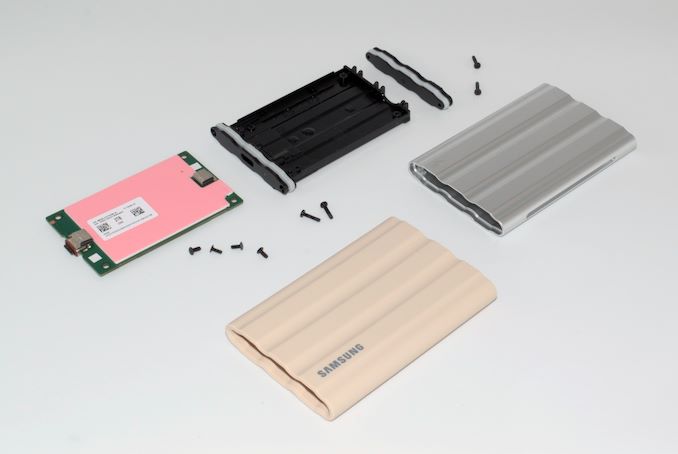 A full teardown gallery is also presented above. It shows that one side of the board is covered with a thermal pad despite having no components on its side. The removal of the thermal pad on the other side reveals the controller and the flash packages. The SSD controller is the S4LR033, and the ASMedia ASM2362 bridge chip is right next to it. The SSD subsysem in the PSSD T7 Shield is a DRAM-less one, and is pretty much the same as that of the T7 Touch - except for the flash packages. The two flash chips on board have the K9DVGB8J1B tag (against the K9DVGY8J5A in our sample of the PSSD T7 Touch). This part number decodes as: TLC, 6th gen V-NAND (128L / 136T), 512Gbit per die, 16 dies, 1TB for the whole package. This is the same NAND package used in Samsung 870 EVO SATA SSD. 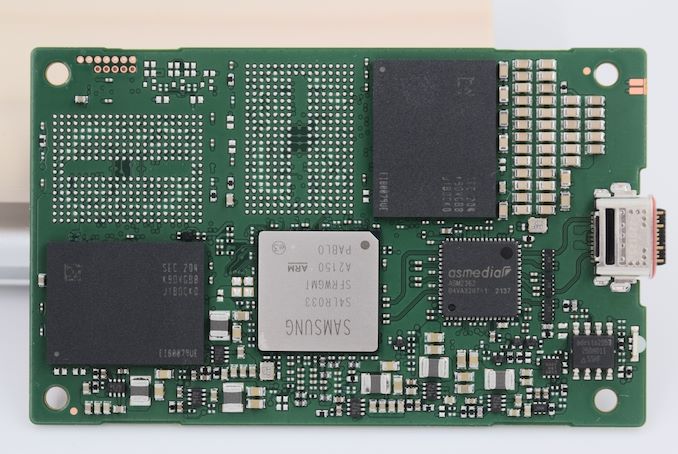 Moving from the 5th Gen. 92L (96T) V-NAND in the T7 Touch to the 6th Gen. 128L (136T) V-NAND brings about a 10% improvement in latency and 15% reduction in power consumption, as per Samsung's claims. As we shall discovered further down in this review, these aspects do bear out when looking at various evaluation results.

A quick overview of the internal capabilities of the storage devices is given by CrystalDiskInfo. The Samsung PSSD T7 Shield supports full S.M.A.R.T passthrough, along with TRIM to ensure consistent performance for the drive over its lifetime.

The table below presents a comparative view of the specifications of the different portable SSDs presented in this review.

Prior to looking at the benchmark numbers, power consumption, and thermal solution effectiveness, a description of the testbed setup and evaluation methodology is provided.

The most attractive aspect of the Quartz Canyon NUC is the presence of two PCIe slots (electrically, x16 and x4) for add-in cards. In the absence of a discrete GPU - for which there is no need in a DAS testbed - both slots are available. In fact, we also added a spare SanDisk Extreme PRO M.2 NVMe SSD to the CPU direct-attached M.2 22110 slot in the baseboard in order to avoid DMI bottlenecks when evaluating Thunderbolt 3 devices. This still allows for two add-in cards operating at x8 (x16 electrical) and x4 (x4 electrical). Since the Quartz Canyon NUC doesn't have a native USB 3.2 Gen 2x2 port, Silverstone's SST-ECU06 add-in card was installed in the x4 slot. All non-Thunderbolt devices are tested using the Type-C port enabled by the SST-ECU06.

The specifications of the testbed are summarized in the table below:

The testbed hardware is only one segment of the evaluation. Over the last few years, the typical direct-attached storage workloads for memory cards have also evolved. High bit-rate 4K videos at 60fps have become quite common, and 8K videos are starting to make an appearance. Game install sizes have also grown steadily even in portable game consoles, thanks to high resolution textures and artwork. Keeping these in mind, our evaluation scheme for direct-attached storage devices involves multiple workloads which are described in detail in the corresponding sections.

In the next section, we have an overview of the performance of the Samsung Portable SSD T7 Shield in these benchmarks. Prior to providing concluding remarks, we have some observations on the PSSD's power consumption numbers and thermal solution also.