A couple of weeks ago we had our first look at AMD's Lightweight Profiling Proposal with the promise of more to come as part of AMD's latest initiative in improving computer performance via additions to the x86 instruction set. Today AMD has lifted the veil off of the next part, and as we have been expecting, this part is a more traditional extension to the x86 instruction set with the addition of new high-performance instructions. This marks the first time AMD has made such a move since the last revision of the 3DNow instruction set several years ago.

To that extent, AMD has opted to cease development of 3DNow and instead focus on further augmenting Intel's SSE instruction set, which won the instruction set wars some time ago with AMD's adoption of it. The result, confusingly enough, is what AMD is calling SSE5, breaking the tradition of all of the iterations of SSE being an Intel product. This is part of a larger AMD effort to inject themselves in to the process of developing further iterations of SSE, as along with the SSE5 specification they are already telling us they're hard at work getting the discussion going in the computing industry about SSE6 and beyond. Intel's name is noticeably absent from any of today's materials, so we will no doubt be hearing their opinion soon on AMD's encroachment in to designing SSE specifications.

As for SSE5, today's announcement is in many ways a very standardized one for an industry that produces a new iteration of SSE approximately every 2 years. Citing the slow growth in clock speed and instruction per second rates in the past few years, AMD has been looking at other ways to improve the performance of their processors. One such way has been by adding more processor cores for extracting additional performance via thread-level parallelism, which has given birth to the modern core wars. Another such effect has been adding more execution units in a single processor core to extract more instruction-level parallelism within a thread, which we have seen occur with Intel's Conroe design, and which AMD will be doing themselves with the upcoming Barcelona core and its derivatives. 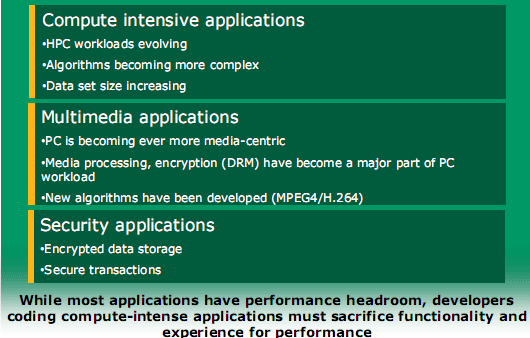 With that said, it's important to note that while AMD is announcing SSE5 on the eve of the Barcelona launch, SSE5 is not going to be shipping with Barcelona or any of its derivatives or immediate successors. AMD will start including SSE5 support in the Bulldozer core, which with an expected launch date of 2009 is still two years off. Today's announcement and publication of their specifications is being done a bit more ahead of time than what we've seen in the past with other variations of SSE so that developers have ample time to learn about it and implement it in time for Bulldozer's launch. Ideally AMD hopes to bypass some of the chicken/egg problems that have occurred with past iterations of SSE.

Unfortunately, with AMD's own SSE5 support we feel they have made a major snafu here in not supporting other versions of SSE. Previously, SSE has been entirely backwards compatible; if a processor supported SSE3 for example, you could count on it supporting SSE2, SSE1, and MMX. Intel's own new SSE extension, SSE4, is launching with Penryn later this year, but AMD will only be supporting a fraction of the SSE4 instruction set in Bulldozer, as seen in the graph below.

We're extremely disappointed in AMD going this route. Some of SSE4's instructions are quite potent, others we have been told are not; AMD believes that the subset of SSE4 they are including are the most useful of these. But we believe it's still worth including such instructions, and by using the name SSE5 and adding it to Bulldozer they have made a very strong implication about backwards compatibility that isn't all there. While this is a valid addition to the SSE instruction set, AMD should have named it something other than SSE5 to avoid confusion.

Finally, we've been told that full SSE4 support is coming for AMD's chips, but without a date. We know that it won't be in Bulldozer, which means SSE4 support won't be happening until a Bulldozer refresh, which will be no earlier than 2010. 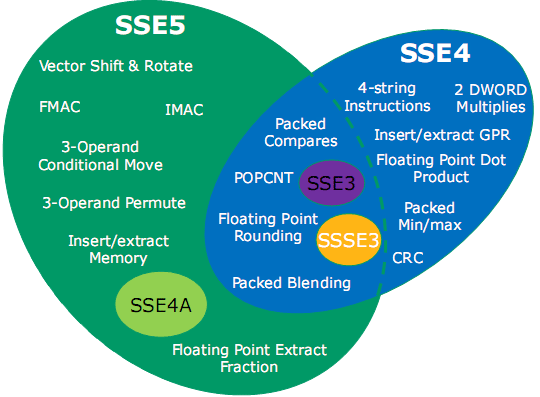