If you want to differentiate yourself in the crowded and competitive video card market, you have two ways to do it. One way is to offer a card with a non-stock design, using things such as different coolers or a new PCB design. The other way is to build a card that you can overclock the hell out of. Today we’re looking at an interesting card from Gigabyte that takes a little from column A, and a whole lot from Column B: The GTX 260 Super Overclock 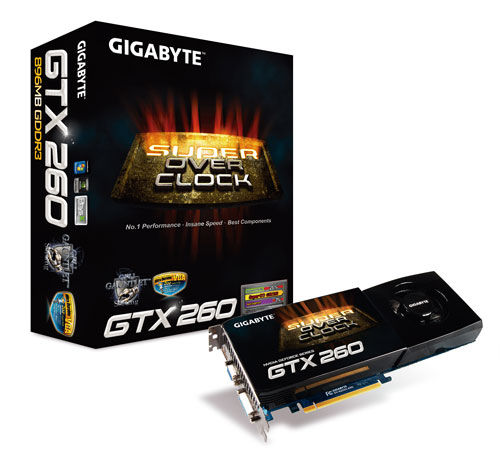 Gigabyte sells no less than three overclocked GTX 260s right now, which means they’re binning chips to assign them to the appropriate product line. Gigabyte’s formal name for this process is called “GPU Gauntlet Sorting”, which is composed of testing them with FurMark and 3DMark at various speeds, and examining their power characteristics to make sure that they aren’t going to start a small fire while in use. From the results of their binning process, they can assign chips to specific cards based on how they perform.

From the very best of Gigabyte’s chips, you get the GTX 260 Super Overclock, the cream of the crop of their GTX 260 lineup. It comes in at 680MHz/1500MHz/2500MHz, giving it an 18% core overclock, a 21% shader overclock, and a 25% memory overclock as compared to a stock GTX 260 Core 216. And just to give you an idea of how aggressive Gigabyte is here, we’re pretty sure that makes it the fastest overclocked GTX 260 as sold by anyone, period.

What’s the significance of being so fast, you may ask? It’s what you end up beating when you overclock a GTX 260 to that degree. Above the GTX 260 in NVIDIA’s pecking order is the GTX 275, which averages around 15%-20% better performance than the GTX 260. With a GTX 260 so heavily overclocked, you can meet (and sometimes beat) a GTX 275, which is what we’ll see today with the GTX 260 Super Overclock.

And what’s the significance of being able to catch a GTX 275 with an overclocked GTX 260? Pricing. Gigabyte can build the GTX 260 Super Overclock for less than anyone can build a GTX 275 (or at least is willing to sell them for), which means that this GTX 260 that wants to be a GTX 275 sells for less than any GTX 275 we can get our hands on today, if only marginally. Gigabyte has put an MSRP of $199 on it, which is $10 less than the cheapest GTX 275 as of today.

Of course this makes it a very expensive GTX 260, but one that is priced appropriately, at least compared to other NVIDIA cards. Compared to AMD’s recent offerings however, $199 is an odd place to be. But we’ll get to that in due time.