As we mentioned in our previous edition of The Cable Chronicles, Microsoft and CableLabs have come to an agreement to allow the installation and use of CableCARDs on unapproved and non-OEM systems, allowing for the wider proliferation of CableCARD equipped HTPCs beyond the handful of OEM systems that CableLabs had previously approved. With Windows 7 implementing a complete DRM scheme for TV tuners – the Protected Broadcast Driver Architecture – computers running Win7 would be the first to be able to take advantage of these relaxed restrictions.

The limitation at the time was that computers did not come CableCARD-capable out of the box. A Digital Cable Advisor tool was to be released by Microsoft, which would check a computer to make sure it meets all of MS’s and CableLab’s requirements, before going ahead and enabling CableCARD access. That tool was supposed to be released in time for Win7’s launch, but it ended up being AWOL at the time. As Microsoft was not going to publish the complete system requirements for using a CableCARD, this tool was the only way to find out the system requirements.

The tool was finally released this weekend, allowing us to get an idea of what the system requirements are.

The tool comes as a Windows Media Center Extra, and needs to be downloaded, installed, and used from within Windows Media Center. If you don’t regularly run MCE, then it probably won’t show up in the Extras Gallery, as MCE picks up on it when it regularly checks in for updates. To force MCE to check in, go to Settings -> General -> Automatic Download Options -> Download Now. 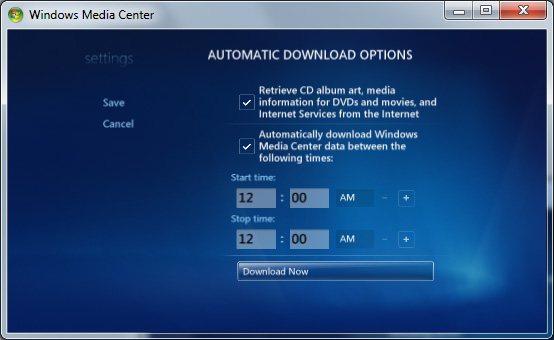 Once installed. It shows up in your Extras Gallery. 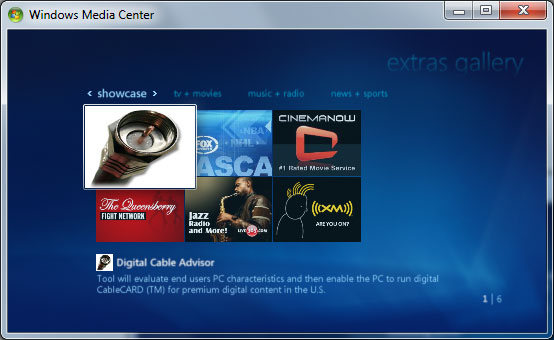 When activated, the tool will analyze the system to determine if it meets MS/CableLab’s requirements, reporting back whether the computer passes or fails the requirements, and if it fails, offers a short explanation why.

Digging through the tool’s support files, for most of the system requirements the tool appears to just be looking at the Windows Experience Index of the computer. The chart below lists the scores we’ve found, and the text attached to them if the computer fails

In spite of the attached text, the tool doesn’t appear to actually be looking for specific pieces of hardware. We ran this test on a single-core computer with 1.5GB of RAM, and it passed anyhow, as it met the WEI scores required. So our best guess is that only WEI scores matter here. 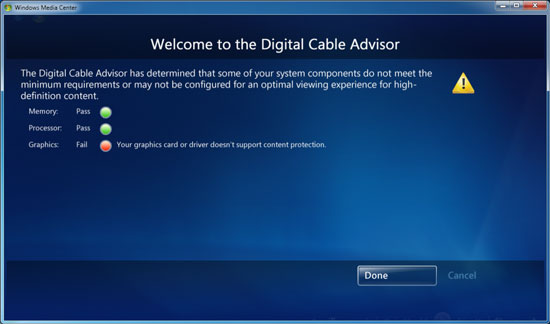 The second test tests the Content Protection (Read: DRM) capabilities of the hardware. It appears to be looking for the various MCE DRM components (PBDA and PlayReady), HDCP support, and DXVA acceleration of MPEG-2. We suspect the DXVA check is just a warning rather than a hard error, but we don’t have any appropriate hardware to test this.

From our testing, we believe the tool will fail if HDCP support is not present in the video card, regardless of if a digital connection is being used. The big question we have, and one we haven’t been able to find an answer to, is whether HDCP is required for digital connections (e.g. an older TV using HDMI), as we don’t have a monitor on-hand that doesn’t support HDCP.

The analog situation looks better. On a PC hooked up to a TV via Component, it passed the check and was allowed to enable CableCARD support.

However once a PC passes the test, the final screen leaves us scratching our heads as to whether the tool actually knows what it’s doing. 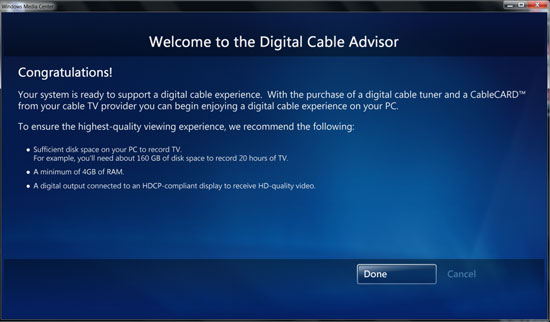 We’re not sure where the disagreement lies. It could very well be that the tool isn’t checking for an HDCP-attached monitor and is just blindly approving everything so long as there’s HDCP support, or that it’s downscaling content going out an analog output (ala the Image Constraint Token on Blu-Ray), or it could be that this is an empty recommendation. This tool was supposed to clear up confusion about what’s required for CableCARD use, and it hasn’t really achieved that.

Finally, in the strangest occurrence, one of our systems was already authorized according to the tool. The Core i7 rig we use for benchmarking shows up as authorized, even on a fresh install of Windows 7. This is expected behavior for OEM systems (or rather, motherboards) that were previously approved by CableLabs, but we have no idea why this would be showing up on an Asus Rampage II Extreme.

Finally, along with the release of the advisor tool, the updated firmware for the ATI TV Wonder Digital Cable Tuner needed to go with these looser restrictions has finally been released. As this was originally intended as an OEM-only product, the only place we’ve seen it thus far is at Dell’s website, where they want $210 for a tuner. Since it’s a single-stream tuner, you’ll want 2 (or more) to watch & record multiple channels. Other vendors will have CableCARD tuners out, including multi-stream tuners, but not until next year. For the time being, CableCARD on Win7 comes with a high early adopter tax. 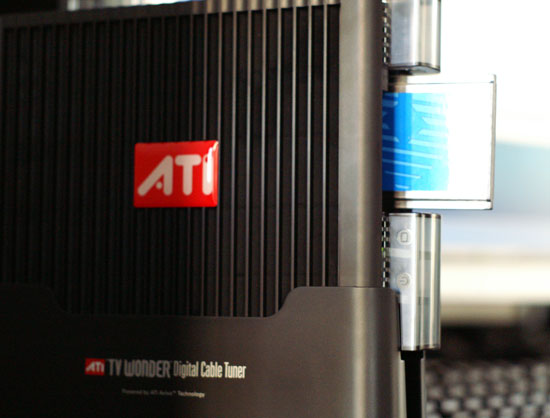