The roadmap for mobile is a lot easier to read through than the desktop one. There aren't as many competing products within a given price class. I've put together the Q3 2010 - Q3 2011 mobile CPU roadmap below, but I've left out the value segments. Sandy Bridge won't make it down there until late next year at this point, so Celerons are off limits for now.

If you're an Apple user the parts you'll want to pay attention to are the 2620, 2540 and 2520 - these will likely be in the next 15-inch MacBook Pro. Clock speeds are up slightly compared to what Apple is shipping today, which means you'll probably see at least a 10%+ performance improvement across the board. I'd expect that number to grow to as high as 15 - 20% depending on the application. 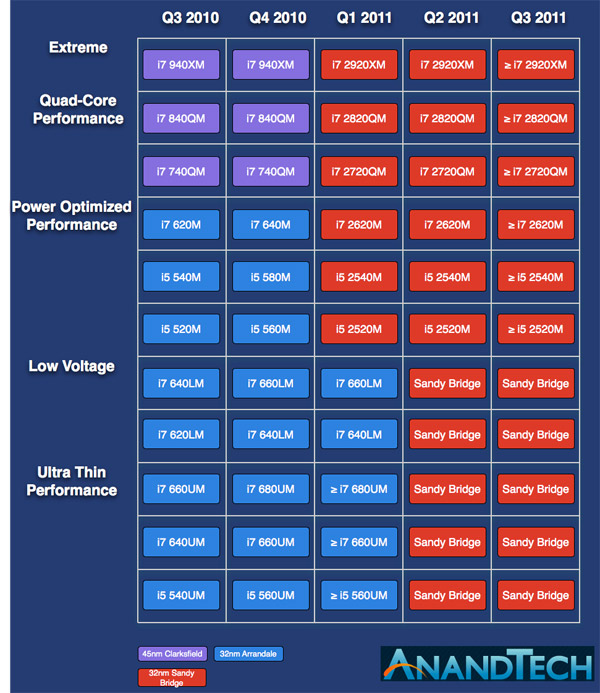 I don't believe Apple will abandon NVIDIA as a result of Sandy Bridge's vastly improved graphics given SB's lack of OpenCL support.

Sandy Bridge looks to be very capable, both on the desktop and mobile side. Both CPU and GPU performance are much improved, the latter particularly in notebooks as all launch mobile Sandy Bridge parts will ship with the higher end 12 EU configuration. Intel is clearly going after the low hanging fruit in the GPU market, though I'm curious to see how far upstream Intel will push its advance.

It's not very hard for Intel to more than double integrated graphics performance. The question is how will it compare to AMD's Llano, a part that will undoubtedly have a competant GPU but a CPU core based on AMD's Phenom II architecture. 2011 is going to be an exciting time for the semiconductor market.