Microsoft developed the Windows Phone 7 UI under the codename Metro. It’s supposed to represent the sort of simple chic design you’d find popular in a big city. If Windows Phone 7 is Metro, Windows Mobile 6 was probably suburban. A more accurate codename for the UI would have to be Liquid - there’s just no other way to describe the interface other than fluid.

There are two dominant UI elements spread throughout Windows Phone: the tile and tappable text.

Tappable text is exactly what it sounds like and the OS is littered with examples. Even conventional tabs are nothing more than oversized text in Microsoft’s Segoe UI light font.

The tabs are incredibly useful in Windows Phone, I’d say just as useful as the first time we got tabs in desktop OSes. In the email app for example there’s a tab for viewing only unread messages. To get to that tab, just swipe to the left. Microsoft calls this "pivoting." You even get a preview of the tab before you swipe to it thanks to Microsoft’s wider-than-a-single-screen interface. 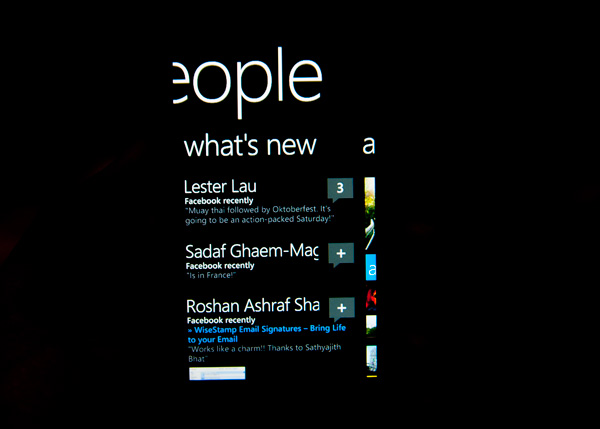 Windows Phone tabs are used extensively in other applications. The Music app uses tabs to switch between what’s currently playing and all of your sources of music. The Videos app uses them to sort between different types of videos (e.g. personal vs. movies or TV shows). Apple and Google use tabs in their smartphone OSes but they’re more traditional. Your finger tends to hover around content, and swiping an entire screen to get to the next tab is just quicker than repositioning your finger at the top or bottom of the screen to tap a button. Switching between tabs in Windows Phone just feels more fluid than in the Apple and Google offerings.

The second basic UI element in Windows Phone 7 is the tile. At least on the Start screen, a tile is nothing more than a giant, optionally animated icon. Tiles can either be square or what Microsoft likes to call a double wide, effectively two tiles placed next to each other.

The default tile is composed of a simple white symbol (e.g. a phone, a camera or an IE logo) and a single line of text.

There’s a fine line between a text heavy UI and navigating through a book. Microsoft stays on the right side of that line by making extensive use of color and animation. Most screens are static when you’re looking at them, but start interacting with the screen and the OS subtly updates various parts of the screen to keep everything lively.

Assuming you’ve synced your contacts and/or provided a Facebook account, the People tile will display mini profile pictures of your friends. The OS automatically cycles through your friends and you don’t have to do anything to customize it, it just keeps things fresh. 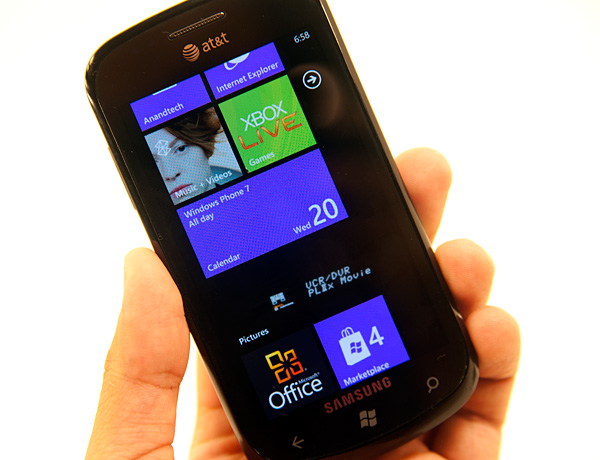 The same is true for the Pictures doublewide. Your actual photos will cycle in here. The Music + Videos tile will display a photo of whatever artist you just listened to.

The UI is also functional. The Calendar doublewide gives you a listing of your appointments for the current day. Tiles for email, phone and the marketplace spawn counters to tell you how many new items (e.g. emails, missed calls/voicemails) lay within.

Animations are spread heavily throughout the OS and virtually all of them are GPU accelerated.

Windows Phone 7 runs two threads in parallel related to the UI: the render thread and the UI thread. The former preps the current frame for rendering and the latter predominantly handles user input. Most manipulation of objects, animation and transitions is handled by the GPU. In fact, Microsoft seems to have recognized the performance deficit on current ARMv7 processors and shifted most of the performance burden to the GPU.

The entire OS only supports a single GPU at this point: Qualcomm’s Adreno 200. Eventually we’ll see support for the 205 and other GPUs, but today, that’s all Microsoft supports. It’s an important limitation because it ensures that all Windows Phone 7 devices, regardless of vendor, have a fully GPU accelerated UI. While Qualcomm’s Adreno 200 GPU isn’t exactly fast, it’s fast enough to run all of the OS UI animations at a constant 60 fps. 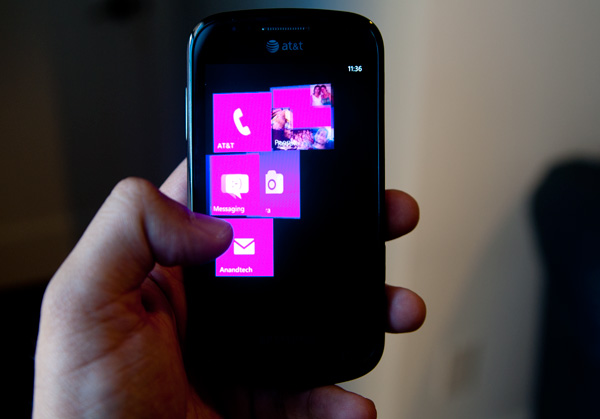 The GPU is put to constant use in animating everything from moving around within an app to launching the app itself. Apps don’t just appear, they fold in. Tap anything pinned to your Start screen and the tiles will quickly fly, piece by piece. The app/hub you tapped on will fly in with similar pomp and circumstance. Even within an app, switching between tabs is an extremely smooth affair. The Start screen animation occasionally feels like it takes too long, but for the most part it’s a non issue.

The high frame rate animations and the absence of any dropped frames makes Windows Phone feel very fast (at times even faster than iOS). It also makes any occasional choppiness or slowdown from downloaded apps very frustrating.

For the most part the UI never slows down, but once you start downloading apps from the Marketplace all bets are off. Many of the 3rd party apps and even Microsoft’s own Xbox Live Extras app drop frames like there’s no tomorrow. That’s the biggest concern I have for the initial wave of apps: they won’t be tuned for performance as much as the apps you get with the phone. The core OS is so fast you assume the rest of the WP7 world will be the same. Ultimately as performance agnostic as Microsoft has tried to make Windows Phone, you will eventually run into UI slowdowns - just not with the Microsoft apps that come with the phone. 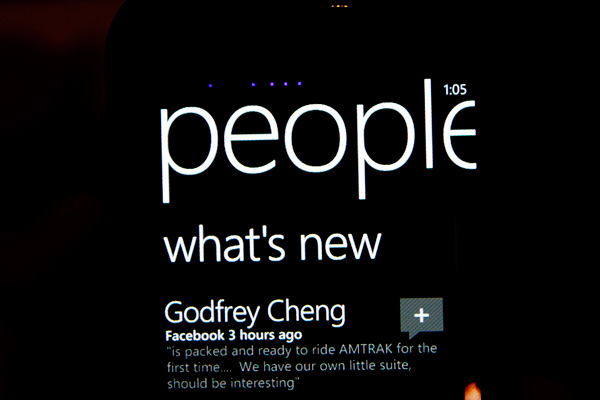 Progress bars echo the UI’s minimalist design. You get five animated dots that fly by the top of the screen when you’re waiting for network response (e.g. loading pages in the Marketplace).

All of the progress bars animate smoothly and seemingly linearly, which helps make the phone feel fast even when it’s taking a long time to do something. This is made most evident while loading web pages in IE mobile. 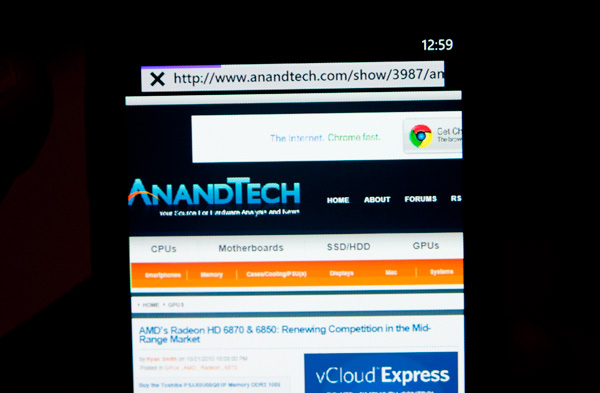 The overall UI is very well thought out. It’s clean, attractive and performant. It’s easily the best UI Microsoft has ever created and one that I hope inspires revolutionary designs within the company’s other business units.

Not the King, but a Start Minimalist, Even Down to the Status Bar
Tweet
PRINT THIS ARTICLE
Comments Locked