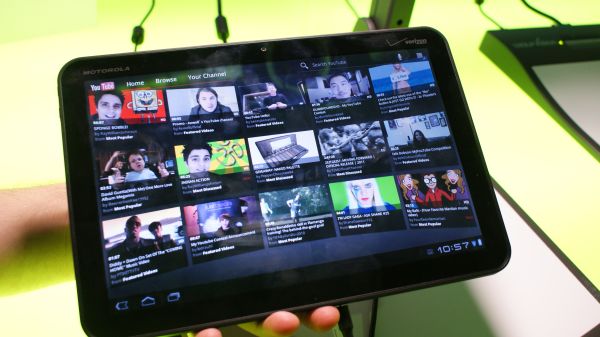 Google has redesigned several of the core Android apps to take advantage of new UI elements like the Action Bar, hardware-accelerated graphics and of course the extra screen space. Apps like Music Player and YouTube have undergone some serious UI makeovers that really leverage the graphical prowess of the Renderscript graphics engine. 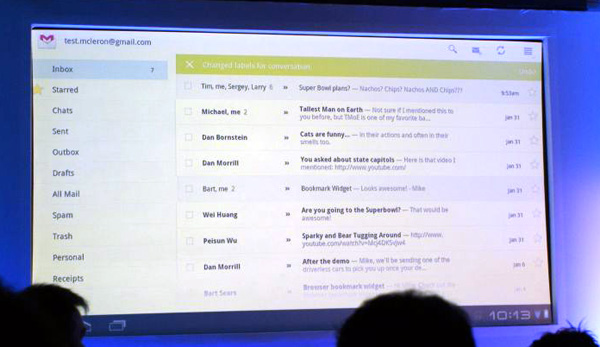 Just like on the iPad, Honeycomb brings a two pane UI to Email/Gmail. The app makes extensive use of the new Action Bar and “Fragments” framework to simplify workflows. Overall, the interface is clean and well organized. 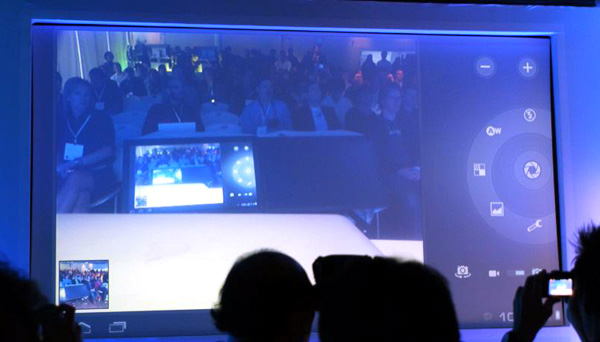 Froyo improved on the camera UI from Éclair (v2.1) by leaps and bounds; Honeycomb has taken it a step further and optimized it for two-handed operation on tablets. The new UI has a rotating dial-like interface that puts most important camera settings at your fingertips. The Gallery app has also been updated with a full-screen mode in addition to a thumbnail view of other pictures.

The browser on Honeycomb looks and feels a lot like Chrome. Its a serious upgrade to the stock Android browser found on earlier versions. Notable features include tabbed browsing, incognito mode, visual bookmarks, bookmark syncing and support for scalable vector graphics (SVG). SVG support was missing until now even though most mobile browsers like Opera Mini, Firefox Mobile and iOS Safari had supported it for a while. The Android browser has always shined performance-wise due to optimizations to JavaScript engine and the OS itself.

But a lot of the performance also depends on the underlying SoC. Google chose NVIDIA's Tegra 2 as the reference SoC for Honeycomb, so all of the initial Honecomb tablets will be based on NVIDIA's T20 SoC. For the latest benchmarks on Tegra 2 check out our Optimus 2X Review and Atrix 4G Preview. 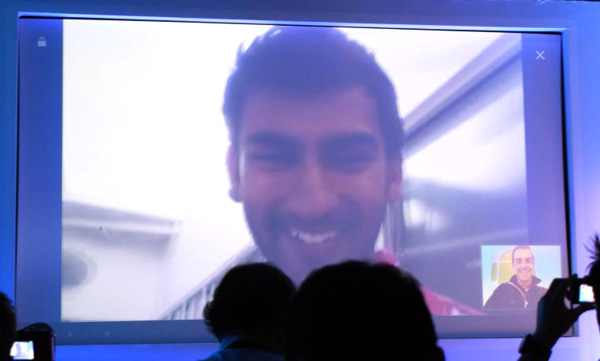 The Google Talk app in Honeycomb (finally) adds support video conferencing. The interface is quite similar to the Gmail version of Google Talk. However, I’m more interested to see whether Honeycomb finally allows using multiple accounts with Google Talk. I was hoping Gingerbread would allow this, but alas I was proved wrong. The video conferencing interface is almost identical to how it’s handled in Gmail. Again, we’ll have more things to say as soon as we get our hands dirty with the Xoom. 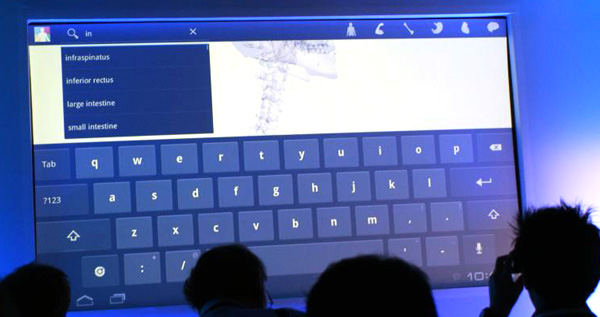 The keyboard has been slightly tweaked since Gingerbread and now includes a new “Tab” button. The keys have also been slightly modified for better placement and usability. The whole OS now supports multitouch gestures that are quite handy. Google has gone the extra mile to make sure that stock apps have a consistent and cohesive UI throughout. The OS now also adds a new UI for text selection, copy and paste that leverages the new Action Bar. Also included is an enhanced system-wide clipboard with drag and drop support that lets users copy, store and transfer content between parts of the OS and across applications. I’m sure there’ll be many minor tweaks and features scattered all over the OS, but we’ll have more on those in our detailed review soon enough.

The Marketplace app got a subtle facelift a few weeks ago, but was not updated with any new features in Gingerbread. The major announcement that came out of last week’s event was a web-based version of the Marketplace that you could browse from any computer. The website can also push purchased apps directly to your device within seconds. The other new feature is support for in-app purchases, which will be rolled out soon. Yet another example of the direction Google’s heading in with Android, tight integration with it’s own cloud services.

From a developer’s standpoint, Honeycomb features support for multiple cameras, multi-core processors, 2D/3D GPU acceleration across applications using the new Renderscript graphics engine, better compatibility across existing apps and so on. Also included is support for better multimedia and connectivity options like HTTP streaming, Media/Picture Transfer Protocol (MTP/PTP), a pluggable DRM framework to allow management of protected content regardless of the underlying DRM engine and API support for Bluetooth A2DP and HSP profiles. There are also some enhancements to the Enterprise feature set of the OS with policies for encrypted storage and password management.

Under The Hood Changes

Perhaps the biggest change in Honeycomb is that the Dalvik VM environment is now multi-core aware. This means the OS can now leverage the processing power and potential power savings of multi-core SoCs to speed things up and offer enhanced battery life. In fact, even single threaded apps can see speed improvements in Honeycomb. While running in a dual-core environment, the OS automatically lets the bytecode run on one core and the Dalvik garbage collector run on the other. Apps specifically written to support symmetric multiprocessing will see even larger performance gains. With companies like ARM (Cortex A15) and Qualcomm (Snapdragon “Krait”) already announcing their next-gen dual/quad-core SoC architectures, it will be exciting to see what kind of mobile performance we have in store for the future!