The Wireless Future: Bluetooth and HomeRF in depth

The most crowded track at this year's IDF seemed to be those centered around wireless technology, and the Bluetooth track was no exception. With the room filling to capacity over 20 minutes before the presentation, it seems that Bluetooth technology is a hit, not only with the press but also with OEMs.

Bluetooth technology was actually launched in May of 1998 by Bluetooth Special Interest Group which now includes nine major partners, including 3com, Microsoft, IBM, and of course Intel. As with all newly announced technology standards, Bluetooth took quite a bit of research in order to launch, with the final 1.0 specification reaching approval on July 26th of 1999. What exactly does this specification call for and how does Bluetooth communication work? Let's take a look.

Bluetooth is a targeted to be a high speed, short distance wireless technology. Working in the 2.4 GHz radio spectrum, it took quite a while for this radio frequency to be approved in all parts of the world, with France and Japan just signing on. The concern was over interference with other preexisting wireless technologies, where two devices working in the 2.4 GHz range could interfere with one another. Bluetooth SIG worked closely with these preexisting companies and ensured that no interference would be experienced on any device.

Bluetooth devices essentially come in two classes, both using point-to-point communication to speak. Class 3 devices operate at the 0 dBm range and are capable of transmitting 30 feet, through walls or other objects. Class 3 products are expected to include USB and PC-card devices, as we will discuss in just a bit. The second class of devices are class 1 products. These devices operate at 20 dBm, which allows for the signal to travel about 300 feet through walls or other solid objects. It is likely that common class 1 devices will be cordless phones and wireless modems. Both Bluetooth classes are rated at traveling at about 1 Mb/s, with next generation products allowing anywhere from 2 to 12 Mb/s, to be determined at a later date.

Intel sees two main uses for Bluetooth technology. First, Bluetooth is to serve as a simple cable replacement technology, eliminating the need for USB cables, parallel cables, and serial cables. A perfect example of this use would be a USB CDROM drive. By using a prototype USB dongle plugged into the CDROM's drive USB port, it would be possible to use Bluetooth technology to allow for wireless data transfers between a host computer (one that has a Bluetooth transmitter/receiver) and the CDROM drive. The USB dongle shown to the right is expected to run under $100 and be available for use in every type of USB peripheral. This would be useful in situations where a user has more than one computer, lets say a desktop and a mobile one, and he does not want to get two separate CDROM burners, one for each system. Instead, the user would opt for a single USB CDROM burner with Bluetooth technology. Using Bluetooth, it would be possible to burn CDs from the laptop while sitting on a couch at the other end of the room. Extend this technology to printers, PC Cards, digital cameras, and all physical USB devices and it is easy to see how Bluetooth can be extremely beneficial. 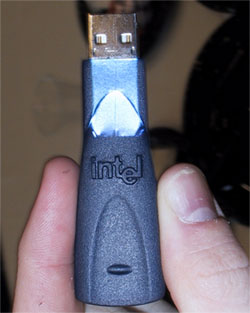