Last week Motorola sent us the Photon Q 4G LTE, a Qualcomm MSM8960 based Android smartphone with a slide-out QWERTY keyboard. While I'll touch on the phone and its keyboard in our review later this week, I wanted to spend a bit of time talking about the performance of Sprint's newly launched LTE network (5MHz FDD channel).

Being the closest ATer to a Sprint LTE market (Atlanta, GA), I hopped in a car on Friday and made the nearly seven hour drive to Atlanta to test the Photon Q in its ideal environment. Raleigh, NC remains a Sprint 3G-only market for now, where I typically find speeds below 1Mbps (0.1Mbps - 1.5Mbps seems to be the typical range). As we've seen in our previous investigations of LTE performance on AT&T and Verizon, the move to 4G LTE can be significantly faster than HSPA+, and definitely compared to Sprint's EVDO. 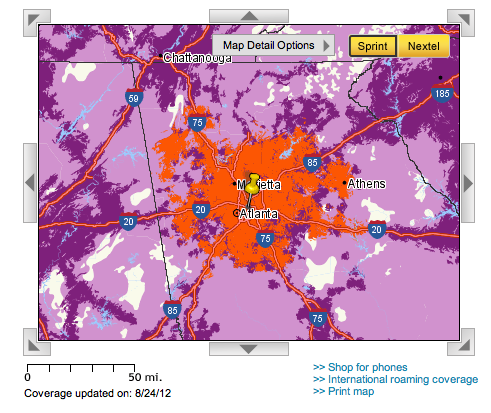 Sprint's coverage map indicates widespread LTE deployment in roughly a 25 mile radius around Atlanta. There's also a small concentration of LTE around Athens, GA as well. In practice, driving into Atlanta from the north along I-85, I found the coverage map to be a bit of a lie. It wasn't until I got much closer to midtown Atlanta that I got consistent LTE coverage. There was spotty coverage well before then, and performance was actually pretty decent (8 - 20Mbps) but it was rarely continuous coverage, at least on the highways.

Once I hit midtown however, LTE coverage was much more consistent. Performance was no where near as good as it was in the outskirts of Atlanta, but I could at least remain on LTE for considerable periods of time. Even then it wasn't unusual to move a few blocks in the wrong direction and fall back to EVDO entirely.

In addition to the Photon Q, Brian sent me the HTC EVO 4G LTE, Sprint's custom take on the One X. I ran a total of 335 speedtests across both phones, not all in the same areas to provide a good overall view of Sprint's LTE performance. I would have run more speed tests but after a while I simply ran out of places with LTE coverage to test. Most of my testing focused on downtown Atlanta and areas to the north and east, it's entirely possible that better coverage exists in south Atlanta. I made a trip over to Athens, GA, a smaller city around an hour's drive east of Atlanta in search of better signal but for the most part came up empty handed. Once again, in some areas on the outskirts of Athens I found great performance, but LTE speeds dropped the further I drove into the city.

The overall performance stats are below:

Average speeds ended up being about half of what they were when I tested AT&T's LTE deployment in D.C. last year. I had an AT&T One X with me on the trip, and saw around 20Mbps down and 10Mbps up by comparison (this was across far fewer speed tests, just as a sanity check).

Peak performance is pretty good however. Sprint's LTE network has been active for just over a month in Atlanta, so it's always possible that things could improve over time. While I never saw the 50Mbps downstream peaks I saw on AT&T, the 25 - 32Mbps datapoints as well as 31ms minimum latency both proved competitive with what I've seen on other carriers. For now the overall performance of Sprint's LTE seems to be more in line with good HSPA+ on AT&T or below average for LTE compared to AT&T/Verizon.

The good news is, average performance is significantly better than Sprint's 3G/EVDO network. As I mentioned earlier, I tend to average below 1Mbps downstream on Sprint's 3G. The move to LTE delivers nearly 5x that speed. If you're on Sprint and are in an area with good LTE coverage, you'll notice a significant increase in performance.

The same data is incorporated in the three graphs below. You can see clear clustering of speeds below 10Mbps. 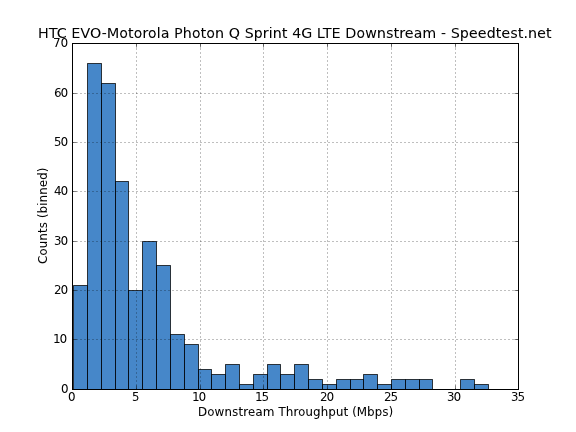 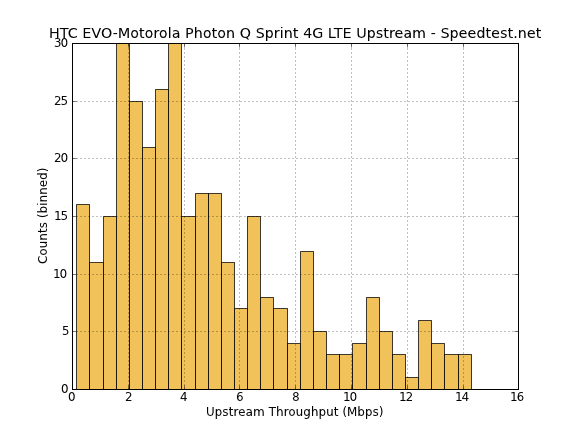 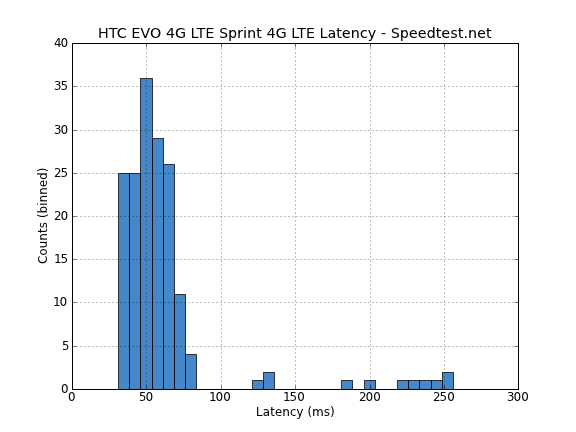 Sprint's LTE deployment is over the PCS (1900MHz) G block (5MHz FDD-LTE). Unfortunately the high-frequency band meant that in-building LTE reception on both the Photon Q and EVO 4G LTE was pretty much non-existent. Signal strength in midtown and downtown Atlanta was never particularly great outdoors, which usually meant that I lost LTE as soon as I stepped into a building. Unfortunately this also meant that I couldn't find a hotel with good enough LTE reception to use for battery life testing. I actually found one hotel near North Druid Hills at 2AM after hours of driving around that had the best, most consistent Sprint LTE signal I had seen all trip. Naturally the place was sold out for the weekend, destroying all hope for Sprint LTE battery life testing.

In practice, both phones seemed to be heading for just under 5 hours of usage with constant LTE speed testing on a single charge. You can expect to see full EVDO and WiFi battery life data in our final review of the Photon Q.