I usually pay little interest to the specs a manufacturer provides for contrast and brightness because they’re so easy to manipulate. Inflated contrast ratios on LED displays come from turning off the backlight and then measuring, as if we work on pure-black screens. Brightness is just as easy to mess with by pushing the panel too far. Everything is tinted and highlights are crushed, but you get a higher brightness reading that might sell. Really everyone is better off to ignore the ratings they see and instead consult with independent reviews.

ASUS manages to split the difference here by under-rating the brightness of the MX299Q but vastly overstating the contrast ratio. ASUS says the MX299Q can produce 300 cd/m^2 of brightness but I managed to produce 341 cd/m^2 from it in my testing. That should be plenty for anyone in regular use, even if you have lots of ambient light. Crank the brightness all the way down and you get 63 cd/m^2, providing you plenty of room in which to find a light level that is appropriate for your work environment. 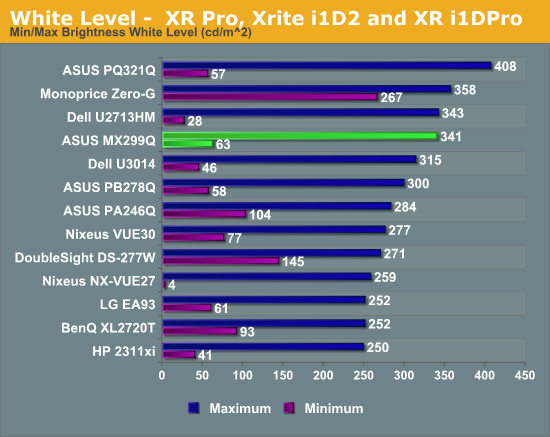 The black level on the ASUS MX299Q is very good. Even with the backlight at maximum we see a black level of 0.3189 cd/m^2, placing it at the top of the pack. Turn the backlight to the minimum and the light output falls to a miniscule 0.0609 cd/m^2. Both of these are excellent numbers, especially for an IPS panel. 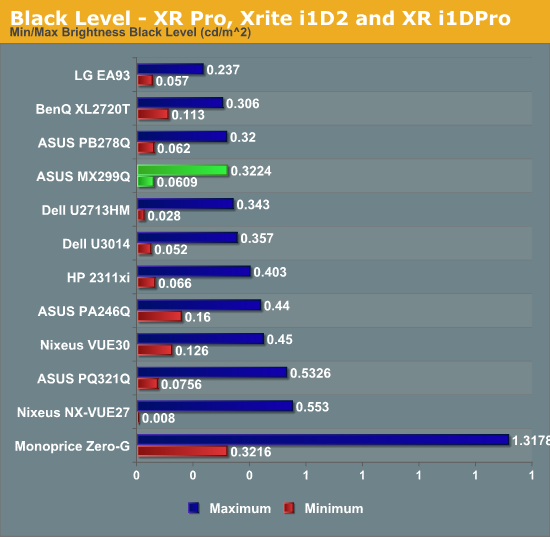 ASUS really got aggressive with their contrast rating of 80,000,000:1 on the MX299Q. The lowest black level any meter can reasonably measure is 0.0001, which would mean a peak white level of 8,000 cd/m^2. I don’t know exactly how bright that is, but I think you’ll be seeing spots or blinded if you looked at a monitor that bright. Needless to say, in practice the MX229Q (and other LCDs) get nowhere near such black levels.

The unfortunate thing is that ASUS has no reason to embellish here. Their actual contrast numbers of 1040:1 and 1058:1 are both excellent and rank among the best IPS displays that have been reviewed. 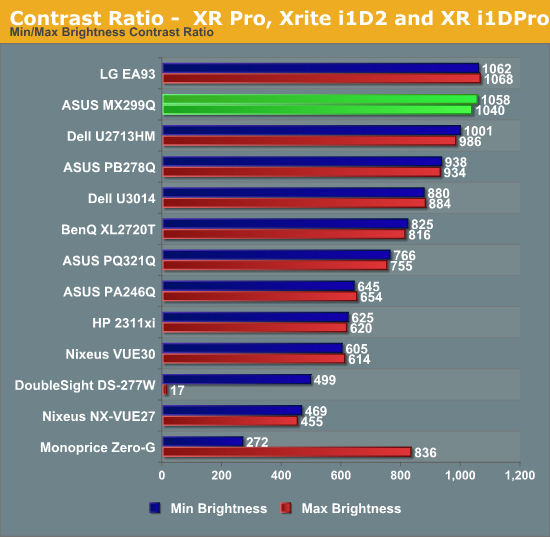 So ASUS might have been too conservative and too aggressive in their official specs for the MX299Q, but the real-world numbers are very good to see.