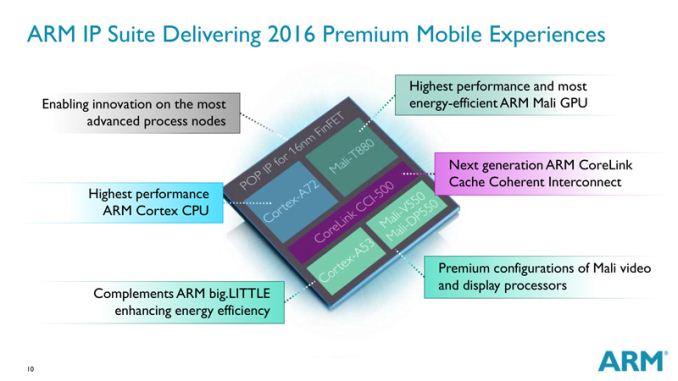 Today ARM is announcing three brand-new premium IP designs targeted at high-end mobile SoCs. We're still only starting to get widespread commercial availability of ARM's latest generation of SoCs, which includes the Cortex-A57 in big.LITTLE configuration coupled with the A53 as little cores, and the newest T760 Mali GPUs. But, while those designs are still ramping up through offerings from Samsung, Qualcomm, HiSilicon and co. this year, ARM isn't staying still and already looking forward to 2016 and beyond.

At the center of today's announcements a new high-end performance core which succeeds the A57 in flagship devices. ARM was very vague about the architectural characteristics of the new design, disclosing for now only estimates of the chip's performance and power targets. ARM promises a 3.5x sustained performance increase over the A15 generation of SoCs while remaining in the same power budget. One has to note that we're talking about performance targets on TSMC's 16nm FinFET+ node versus previous nodes such as 28 and 20nm, which in itself should bring large clock and power advantages. 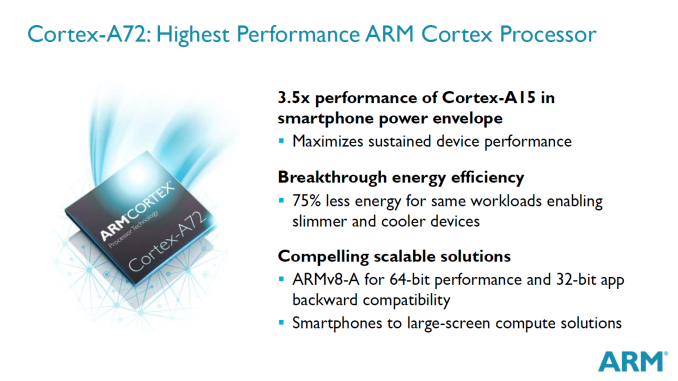 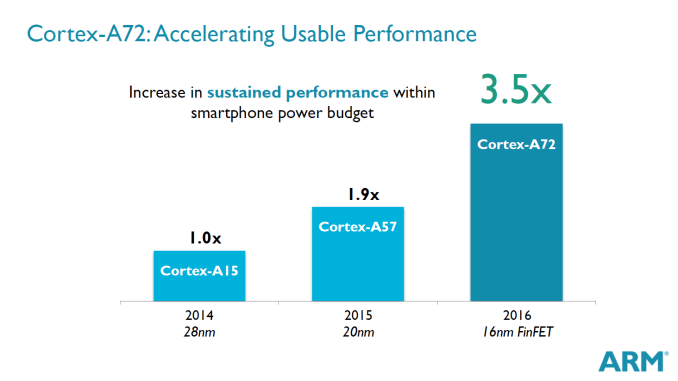 The A72 targets roughly 1.9X the sustained performance of current 20nm A57 SoCs, meaning the Exynos 5433 and the Snapdragon 810 can be taken as the base for comparisons. ARM doesn't yet mention peak performance so we may be talking about overall power efficiency gains that enable future SoCs to throttle much less. ARM will be divulging more information on the architecture of the A72 in the coming months, and we're hoping to have a better picture on the actual IPC and efficiency gains of the new flagship core by then. 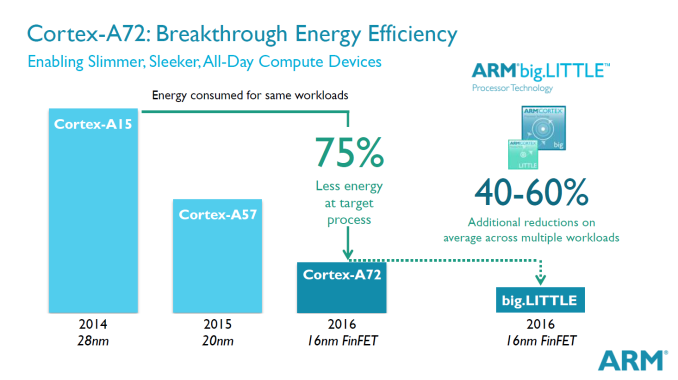 The Cortex-A72, being a "big" core, can be partnered up with the already existing A53 LITTLE core architectures. ARM has said in the past that the A53 took in-order designs to new heights, and while work on a successor is underway, it seems that for now we'll be sticking with the A53 architecture for a while longer.

HiSilicon, MediaTek and Rockchip are listed among more than then launch partners which have already licensed the Cortex-A72 processor, so expect to see a variety of vendors offering the new ARM IP in 2016.

It's been over 3 years since ARM initially announced their CCI-400 (Cache Coherent Interconnect), which saw widespread usage as the corner-stone technology enabling big.LITTLE heterogeneous multiprocessing in all consumer SoCs from the Exynos 5410 to the latest Snapdragon 810. While ARM also offered high-end alternatives such as the CCN-5XX (Cache Coherent Network) range of interconnects, these were targeted more at server-applications and not meant for mobile SoCs in smartphones or tablets. 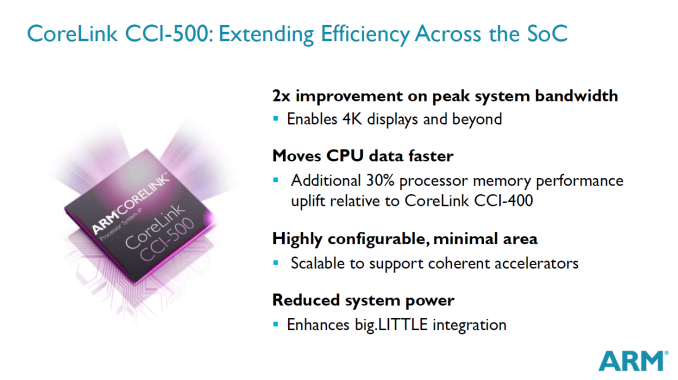 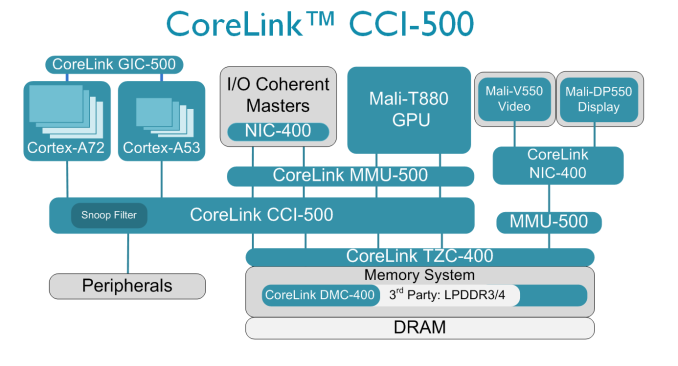 The new interconnect also doubles up on its system bandwidth: We now have twice the number of ACE (AXI Coherency Extension) ports, enabling usage of a maximum of four CPU clusters (instead of the two that are possible with the CCI-400). We'll be continuing to see the usage of only two clusters in mobile designs, but the new IP gives licensees the flexibility to deviate according to their needs.

The increased bandwidth and numbers of ports on the interconnect also opens up the possibility of quad-channel memory controllers, resulting in 128-bit memory buses. The Snapdragon 805 was the first mobile product to feature such capability, although Qualcomm used a non-cache-coherent interconnect in their design.

Lastly, ARM also announced a new member of the T800 series of Mali GPUs. In addition to the T820, T830 and T860 comes the T880.  ARM was again light on details of what this new configuration brings, only promising a 1.8x increase performance over 2014 Mali T760 GPUs and a 40% reduction in energy consumption for the same workloads. 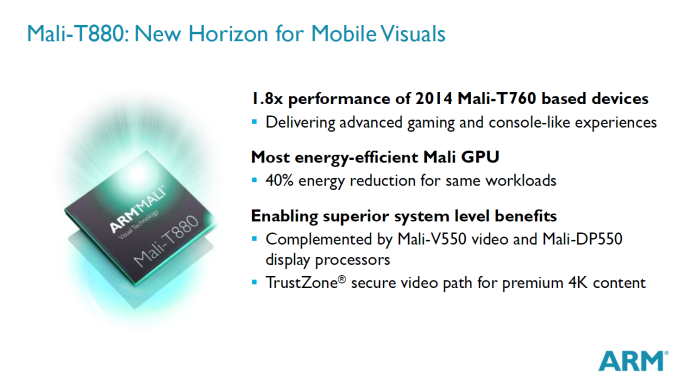 With today's announcements, ARM appears to be addressing its weaknesses in mobile SoCs by focusing on sustained performance and efficiency of its big core architecture. We also have the much needed upgrade in the memory/interconnect subsystem and an expansion in its GPU IP offering.