Aesthetics are a subjective matter but we believe that most users will find the appearance of the Cougar 700K to be impressive. The design is futuristic, with enlarged lettering and the keys are secured directly on the aluminum surface, without a surrounding frame. From a purely practical point of view, the design makes such keyboards very easy to clean, as a simple blow can remove most debris from the aluminum surface of the keyboard. It is not entirely made out of aluminum though; the top half of the body is a brushed aluminum board but the rest of the keyboard is plastic. The detachable plastic wrist rest hosts one of the unique features of this keyboard – a secondary wrist rest can be magnetically attached to its left side, raising its height by a few more millimeters, making WASD or TAB-1234 gaming more comfortable. The secondary wrist rest also has a textured, non-slip surface.

The keyboard weighs 1.2kg and, ironically, Cougar is trying to market it as "lightweight". It actually is a rather heavy keyboard and that is a good thing, as it stays firmly in place even when the user is making intense movements and/or pressing a palm against the wrist rest. It is not clear why the company would try to market a 1.2kg keyboard as lightweight, as this is not a product designed for convenient transportation anyway; gamers that move around a lot would be looking for a far more compact and, most likely, tenkeyless keyboard. 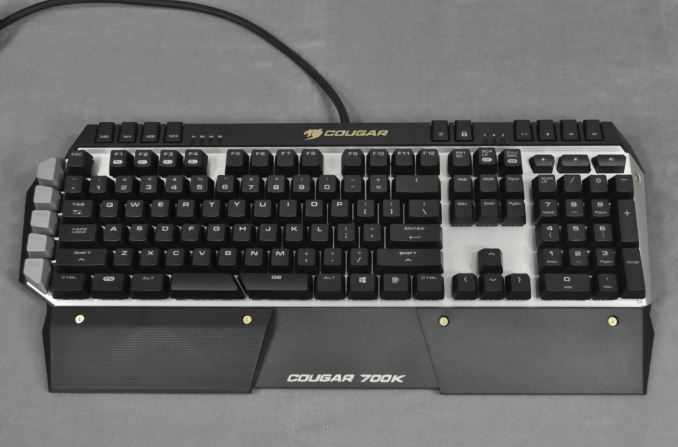 Aside from the typical 104 keys of a full size keyboard, the 700K has a number of extra keys as well. To begin with, there are six programmable keys can perform any macro or action. Five of them are the grey keys to the left side of the keyboard, while the sixth is the right half of the spacebar. The split spacebar key is perhaps the most interesting part of the 700K, in a variety of ways – it allows the user to have two programmable keys accessible by thumb and distributes the actuation force more evenly while typing.

The mechanical switches beneath the 105 keys (104 basic keys + 1 of the split spacebar) are supplied by Cherry. Our sample came with MX Red switches but the 700K is also available with MX Brown. Cross-type supports can be found under the larger keys, preventing wobbling and distributing the actuation force more evenly, meaning that the key will require about the same actuation force regardless of the pressure point. As for the lighting, LEDs have been installed beneath every key of the keyboard. Individual key backlighting is possible but the 700K is limited to amber/orange color backlighting only; it is not possible to adjust the color, only the intensity of the LEDs. 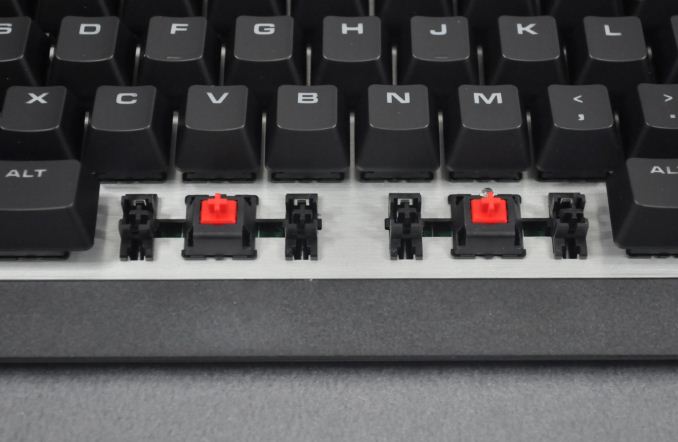 Four flat keys at the top left of the keyboard allow the user to initiate on-the-fly macro recording or switch between three programmable modes. Next to those keys, four LEDs indicate the current repeat rate. Six of these flat keys can also be found at the top right side of the keyboard as well. One controls the intensity of the backlighting, one locks the Windows key, and four provide basic media controls. Between these four keys and the numeric keypad, three tall plastic keys provide sound volume control. These are not as convenient as a volume wheel but they get the job done – they are however notably shorter than the rest of the keys so, depending on the position of the keyboard, the user might inadvertently press the Numpad's top row keys instead of them.

Finally, more options are accessible via the FN key, which replaces the Windows key at the bottom left side of the keyboard. The repeat rate of the keyboard can be adjusted by holding down the FN key and then pressing the F1 to F4 keys, while the FN + SCR LK and FN + Pause combinations control the key rollover mode. However, as these options are found in the keyboard's software as well, the FN key is not of practical importance and most users are likely to reprogram it to function as a Windows key again.

At the back of the keyboard, there's a single USB port and 3.5mm audio jacks near its right side. Having a USB port there can be very convenient for wired mice or for users whose the computer is not easily accessible, such as under an office desk or otherwise hidden. There is nothing of note on the bottom of the keyboard, only anti-skid pads and two basic height adjustment feet.

Inside the keyboard, we found an excellent assembly and an immaculate soldering job. The keyboard consists of four PCBs – the main PCB that holds all of the main keys and components, two PCBs for the keys alongside the top of the keyboard, and one PCB for the USB port and 3.5mm jacks. An NXP LPC11U14F-201 is the core processor of the keyboard, accompanied by a Holtek HT1632C LED driver. This NXP microcontroller is one of the fastest available for mechanical keyboards today but, unlike the NXP LPC11U37F-501 that other premium offerings are using, it "only" has 32kB of flash RAM. Considering that the 700K lacks RGB lighting or too many macro keys, the LPC11U14F-201 should be more than sufficient.