The Interior of the Phanteks Enthoo Pro

Phanteks placed a lot of thought and resources while designing the interior of the Enthoo Pro. With the exception of the white stock fan blades, everything else in the case is black. A very wide opening on the motherboard tray allows for the installation of advanced CPU coolers without having to remove the motherboard. The opening is so large that if the user were to install an ITX motherboard, the board would barely cover about 60% of it, leaving a large gap to its right side. Flex-ATX and Mini-ATX motherboards will leave a small opening to their right as well. Many cable openings surround the motherboard tray, all covered with rubber grommets. 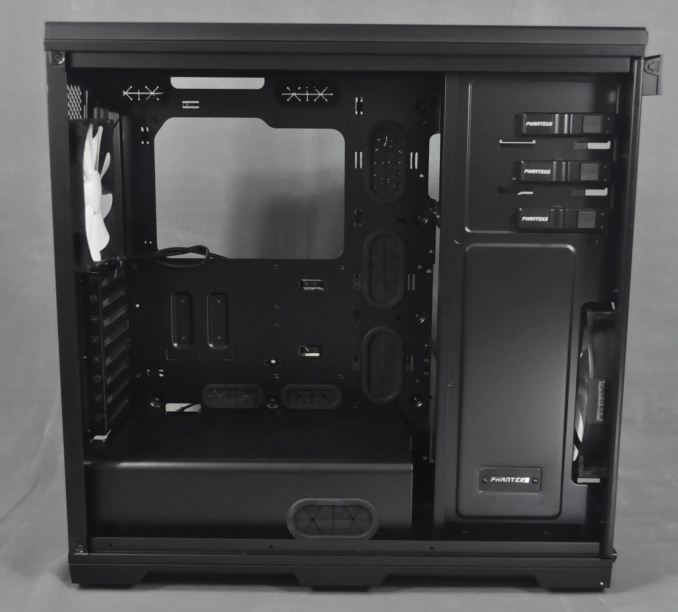 A cover for the PSU compartment is a rare addition. It has no real function other than the aesthetic upgrade but it is certain that modders will appreciate its presence. The compartment has two openings, a large one on the motherboard tray and a smaller one at the front of the cover, both covered by rubber grommets. The PSU sits on six soft feet that will absorb any vibrations. The installation of the cover is optional, allowing the user to showcase their PSU or install it with its fan facing upwards if need be, as well as to make compatible the case with fanless PSU designs. 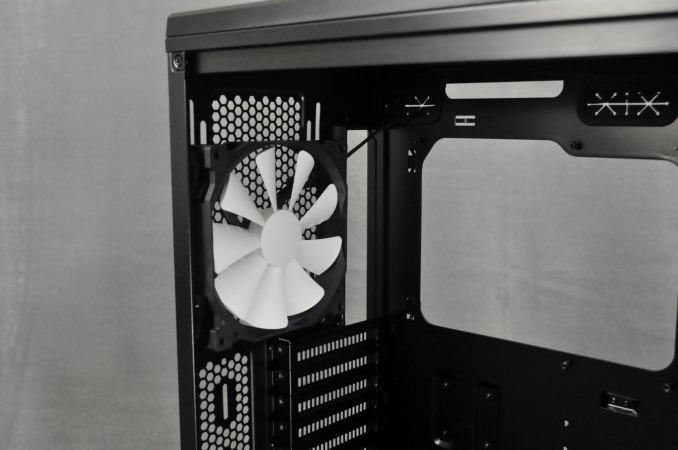 A large metallic wall conceals the two HDD cages and forms the three 5.25" bays. Plastic mechanisms lock the 5.25" devices in place and screws can be used for a more permanent installation. A metallic badge with the company logo can be seen near the bottom of the wall and that will be virtually the only thing visible from the front window of the side panel. The HDD cages can be removed to increase the clearance for expansion cards from 34.7cm to 47cm; however, the sidewall may be blocking the power connectors of the card if they are on the side. 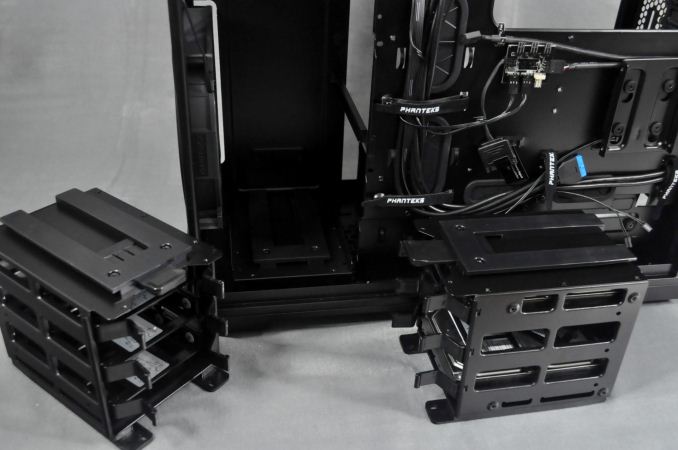 The two HDD cages are removable from the right side of the case. Each cage can hold up to three devices, which can be either 3.5" or 2.5" drives, and has a foam pad at the rear to ensure that no vibrations are being transferred to the sidewall of the case. The drive trays are interesting, offering tool-less installation for 3.5" drives via winged pegs that snap at the sides through anti-vibration rubber rings. Optionally, screws can be used to secure 3.5" drives on the tray. The use of screws is obligatory for 2.5" devices, which obviously cannot be secured using the winged pegs. 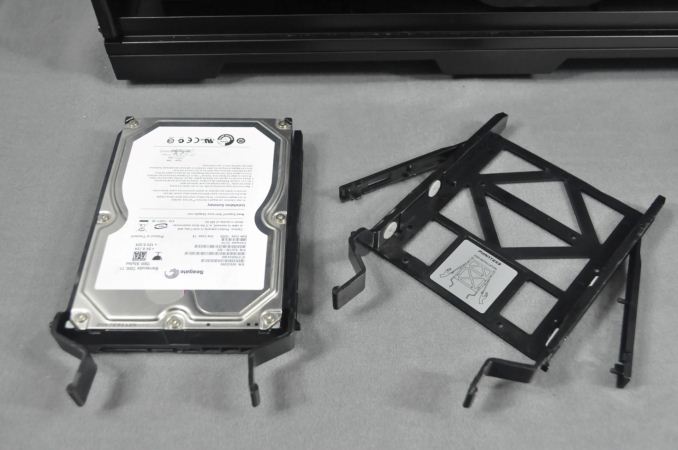 The rear of the motherboard tray is spacious and outstandingly well designed. Phanteks installed cable ties across the two cable paths that should reduce the time of cable management significantly and keep everything very tidy. The only problem is that the CPU 12V power cable needs to be very long (or an extension needs to be used) in order to reach the top left side of the motherboard.

Two 2.5" drive trays can be installed to the right side of the case but only one tray is supplied and the second is optional - which is very strange, as the cost of a metallic tray should be very small compared to the hassle this creates for everyone that has more than one SSD. A very basic but usable fan controller can be seen as well, which may be used to control up to six cooling fans, including that of the CPU cooler. 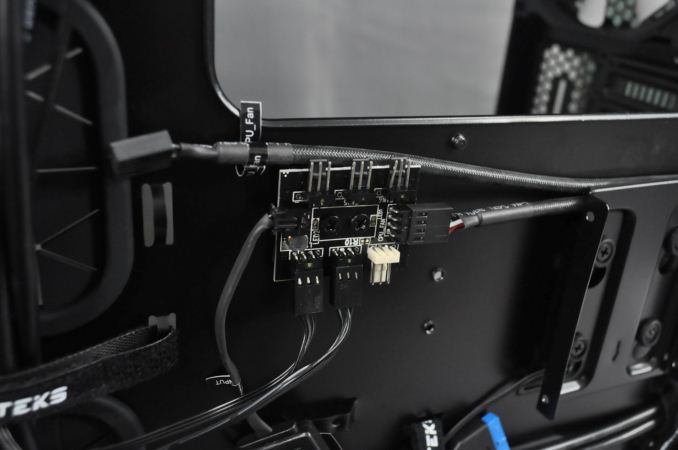 The fan controller connects to the CPU fan power header and, essentially, it just copies the PWM signal of the CPU fan header and uses it to adjust the speed of five more fans. It requires additional power from a SATA connector. This approach may be a little dangerous, as it controls the speed of the connected fans using the PWM signal of the CPU header alone - if the CPU is being kept cool by a very advanced cooling system, connecting fans that cool other components or all of the case's fans to the controller could result to overheating or stability problems.

By far the greatest feature of the Phanteks Enthoo Pro is nothing else but the chassis itself. The panels and parts of the chassis are not permanently bolted to each other - screws are holding the case together and it can be dismantled entirely if needed. For the average user, the ability to dismantle the case probably means nothing; however, this is a very rare ability that will surely drive the imagination of modders wild.

Black cables and parts are easily hidden inside an all-black chassis; therefore, for visual clarity, we are using an AX760i PSU with a red cable pack and white SATA cables for our pictures. Building a system inside the Phanteks Enthoo Pro is a very easy, as the case is very spacious and the cable management becomes an admirably easy process. It takes no more than a few minutes to assemble a basic system inside the Enthoo Pro, but we feel that its spaciousness will mostly be appreciated by those with systems that are more complex. We could not find any sharp or otherwise dangerous spots in or around the Enthoo Pro during our experience with it. 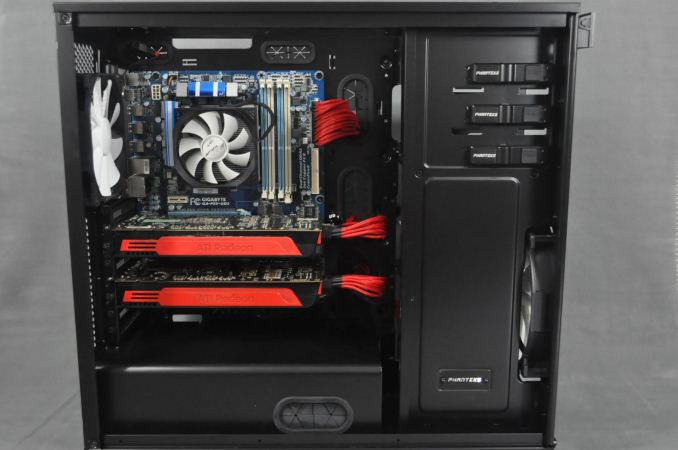 There is plenty of clearance between the components and parts of the case, allowing the cables to turn without too much tension and providing enough space for the installation of AIO cooler radiators. With a little careful cable routing, even an amateur can easily build a very tidy and visually pleasing system. The only concerning issue is the required length of the 12V power connector. As seen from our pictures, the cable of the AX760i was not long enough to reach the top right side of the motherboard, even though we ignored the predetermined cable path and went for the opening in a straight line. An extension cable is likely going to be necessary for the majority of users.