As we mentioned in our T9 review, the ASUS brand name is a new one to the notebook market. Although the company has and continues to OEM for more than one tier one companies, it was not until recently that they decided to start designing and branding their own notebook line. The S1 is the thin-and-light model of the company's six notebook solutions.

Like the T9 we looked at a few months ago, the S1 is certainly pleasing on the eye. The system is colored in a silver and black motif that made the S1 look and feel like the Sony line of thin-and-light notebooks. The screen is enclosed in a magnesium-aluminum shell, while the remainder of the S1 is plastic for the most part.

The screen is opened by hitting a small black release button located in the middle of the bottom half of the S1. Hitting this button releases the S1's 13.3" XGA LCD panel which is easily lifted to the open position. Because the system is in the thin-and-light class, the keyboard on the S1 is a bit smaller than those found on desktop replacement notebooks. The keyboard does contain 85-keys including dedicated arrow, page up, page down, home, and end keys. In order to fit all these keys in such a limited space, the S1's top row of keys, the F1-F12 keys and the page up, page down, home, end, insert, and delete keys, are about half the size of the standard keys. In addition, the leftmost column of keys, the tilde, tab, caps lock, and shift keys were slightly squashed horizontally to make more room for the letter keys. The remainder of the keys, the letter keys, measure a desktop-like 19mm with 2.3mm of travel.

Although it measures a bit small, the keyboard on the S1 was a pleasure to use. Our fingers could tell no difference between the translucent keys on the S1 and the keys on the desktop replacement Compaq 2800T. We found that of all the keys, we were most limited by the overly small escape key, but then again we didn't use this key, or any others on the top row as the case may be, enough for it to be a major problem. Like the T9, the S1's keyboard places the function key where the control key is typically located which took a bit of use to get used to.

The touchpad on the S1 is located slightly to the left of the system to place it directly in the middle of the letters on the keyboard. The S1's touchpad proved easy to work with, especially with the scroll up/scroll down rocker button located between the right and left mouse buttons. 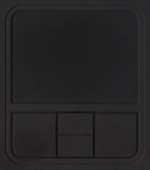 The area around the touchpad, the wrist rest area, is made of a soft plastic that not only looks nice but was comfortable to rest on. Even though the S1 is small there was plenty of room below the keyboard to rest ones wrists when typing.

Above the keyboard lie a set of five buttons, four of which are customizable. The largest button, the leftmost one, is the power button. To the right lie four buttons with icons below the buttons somewhat indicating their function: a mail button, an internet button, a lightening button, and a running man button. Each of these buttons are user customizable using ASUS' bundled Hotkey utility.

To the left of the buttons are a set of three LEDS that indicate hard drive activity, number lock status, and caps lock status. Above these buttons, on the S1's screen, is a small hole for the unit's built in microphone.