ADDA supplies the cooling fan of this PSU. The ADN512DB-A91 has a 135mm wide frame, a ball bearing motor and a maximum speed of just 1500 RPM, which is relatively conservative for a 1200W PSU. 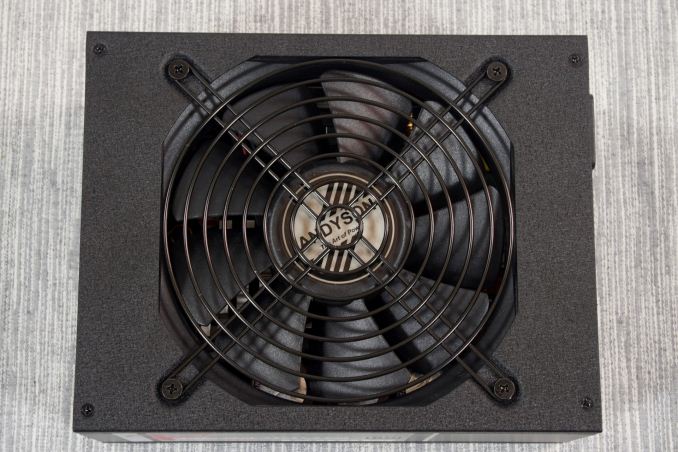 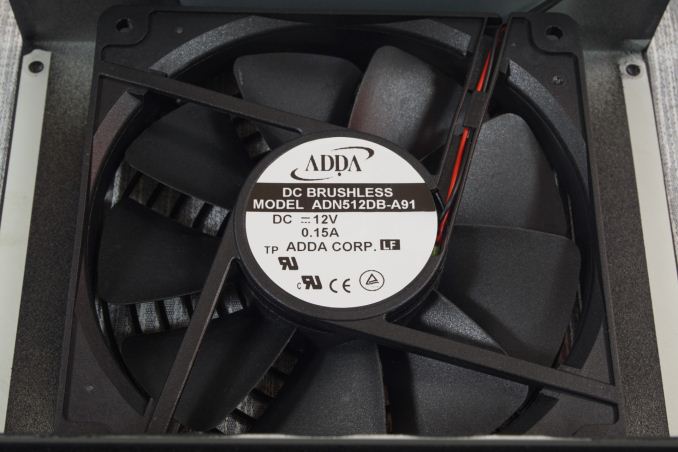 There is no "hidden OEM" behind the Platinum R 1200W as Andyson designs and creates their own PSUs and this unit is entirely of their own making. What someone immediately notices about the layout is that there are very few wires. Andyson went as far as to mount the AC receptacle and switch on a PCB that comes in direct contact with the main PCB of the unit. 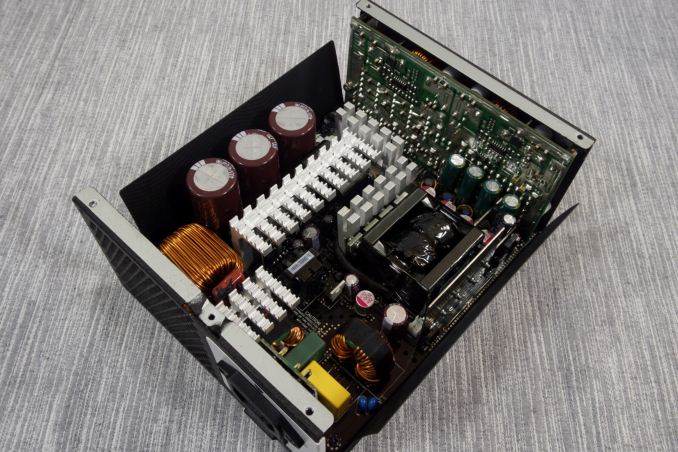 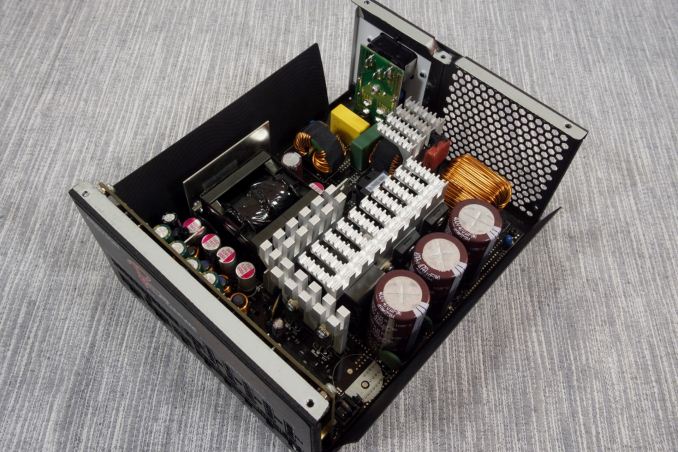 The filtering stage begins on that small PCB and continues on the main PCB of the unit, comprising of four Y capacitors, two X capacitors and two filtering inductors. A surge-suppressing MOV can also be found. The primary conversion bridges share their own small heatsink right after the filtering stage. 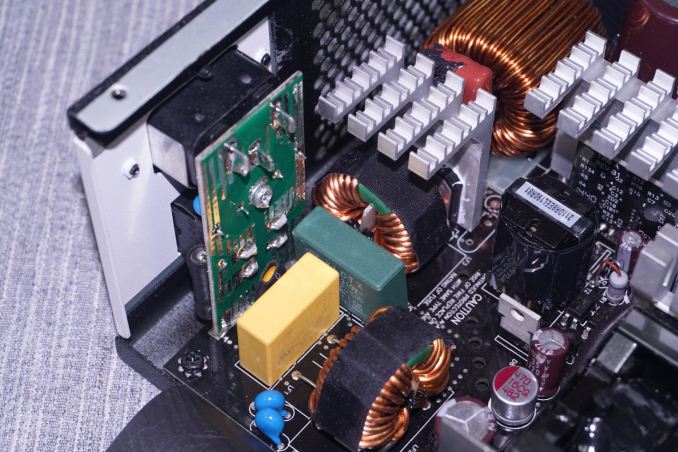 Three Nippon Chemi-Con 400V/470μF capacitors and a very large inductor are the passive components of the APFC stage. These capacitors are exceedingly large, even for a 1200W PSU, which explains the presence of two NTC thermistors to moderate the inrush current of the PSU. The active components for the APFC, two transistors and a diode, are attached to the large heatsink next to the capacitors. Smaller, simple heatsinks hold the four transistors of the primary inversion stage, which form a full-bridge configuration. The eight secondary conversion stage transistors are on an even simpler heatsink that is nothing more than a thin sheet of metal. 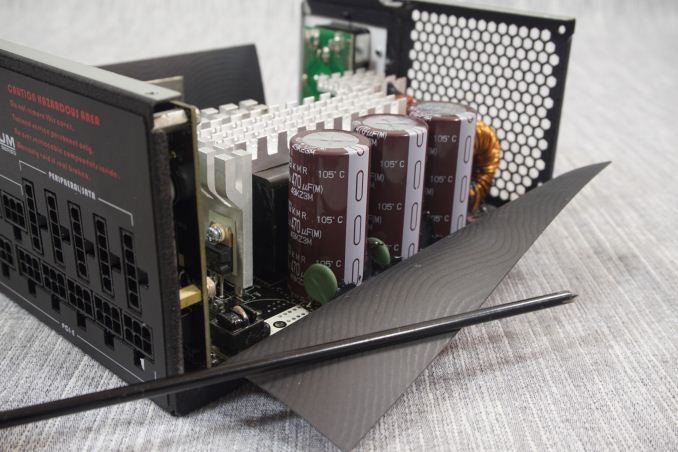 Only a 12V output is generated by the secondary conversion stage of this PSU. Thick metal bars form current pathways, transferring the output of the unit to the vertical PCB that holds the cable connectors. The 3.3V and 5V DC-to-DC conversion circuits are present on this PCB, eliminating the losses that would occur if they were generated on the main PCB and then transferred on this one. 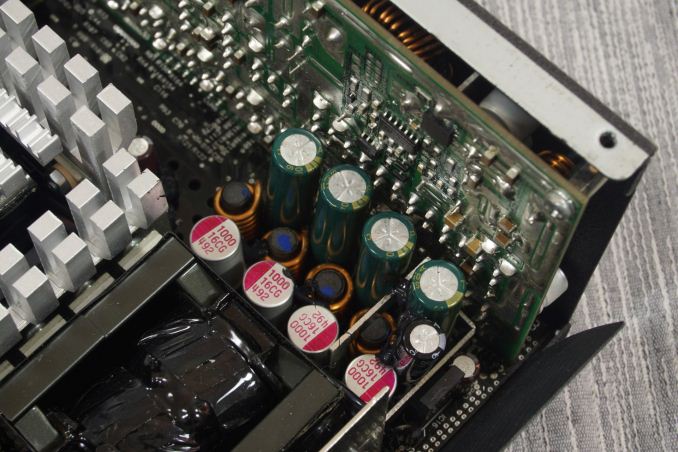 Most of the secondary capacitors, electrolytic and polymer alike, are supplied by Teapo. Only a few Nippon Chemi-Con electrolytic capacitors on the vertical PCB are an exception. Teapo is not the favorite manufacturer among enthusiasts but it is true that their products are being used more and more in high-end products. Andyson covers this unit with a ten year warranty, so they either feel very confident that Teapo is reliable enough or they severely oversized the capacitors in order to counter their aging. 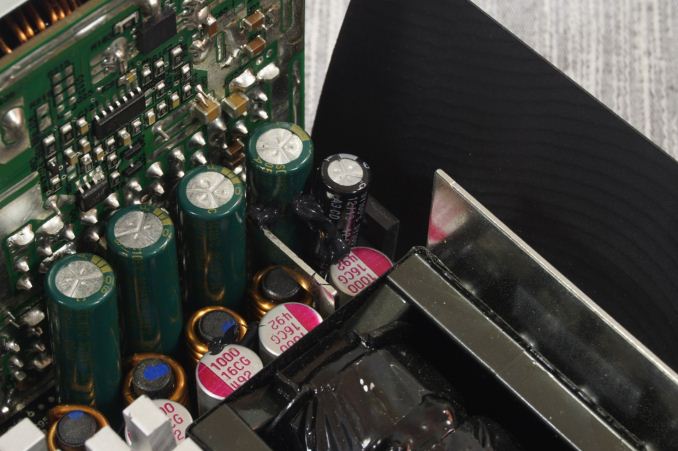 Quality-wise, the design is almost impeccable. The layout is very well designed and clean, while the soldering job is immaculate. There is just one dissonance that feels like a rookie's mistake: right next to the secondary conversion stage and towards the secondary PCB, where the metallic bars transfer the current from one PCB to another, Andyson had to place a capacitor between a tall electrolytic and a short polymer. For unknown reasons, much likely because Andyson is oversizing the components across the layout to ensure high performance and reliability, this capacitor could not fit where it was supposed to. Andyson circumvented this by gluing the capacitor on the adjacent components and insulating its leads, which are soldered on the main PCB nearly two centimeters below. This is not a critical problem but it is something that just does not match the aptness of the rest of the unit.