When Apple unveiled the original iPad they claimed that it had a ten hour battery life, and that claim generally held up well. That ten hour battery rating has continued with every iPad released since then, and it has become something of a de-facto target for other tablet manufacturers. Rarely do I see a company promise above ten hours, and nobody has really been able to go very far above it in our web browsing battery life test.

Even though the iPad Mini 4 is rated for 10 hours of usage and Apple is usually able to meet that goal in lighter and more balanced workloads, there will obviously be differences depending on exactly what tasks the user is performing. Because of this, it's important to examine the Mini 4's battery life in a variety of different scenarios to see how different workloads influence the battery life. As always, the first two tests are our WiFi web browsing test and video playback test, followed by BaseMark OS II's CPU-bound battery test, and GFXBench 3.0's GPU-bound battery test. 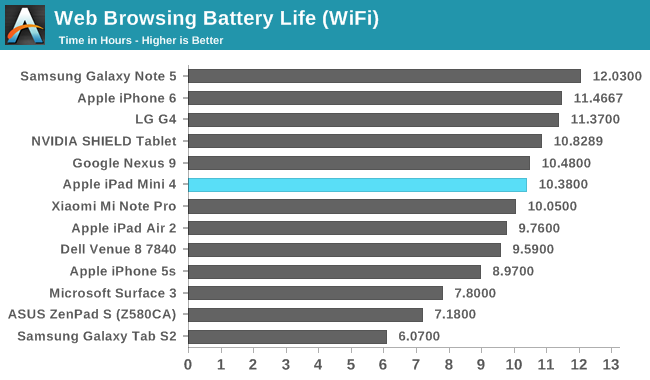 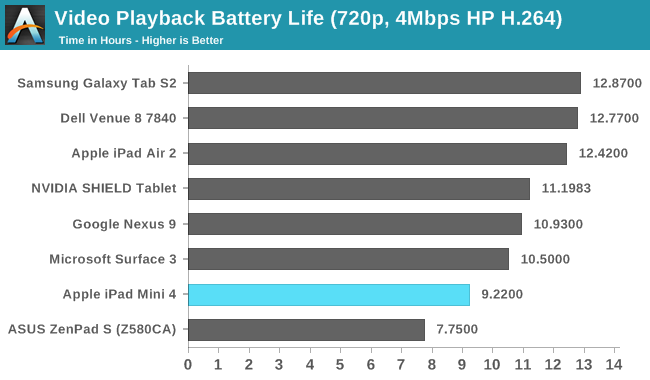 WiFi web browsing battery life on the Mini 4 is exactly where it needs to be. It actually lasts about 40 minutes longer than the iPad Air 2 which is likely due to the lower power requirements of the smaller display during the duration of the test. Video playback battery life is actually slightly shorter than I expected, although still quite good. Since Apple does apply CABC during full screen video playback when the UI isn't showing it's likely that the reason for the gap between the Mini 4 and the Air 2 is due to the Air 2's larger battery, with the display's brightness and gamma being played with a bit to reduce display power consumption, and the power cost of decoding H.264 video essentially being the same fixed amount on both devices. 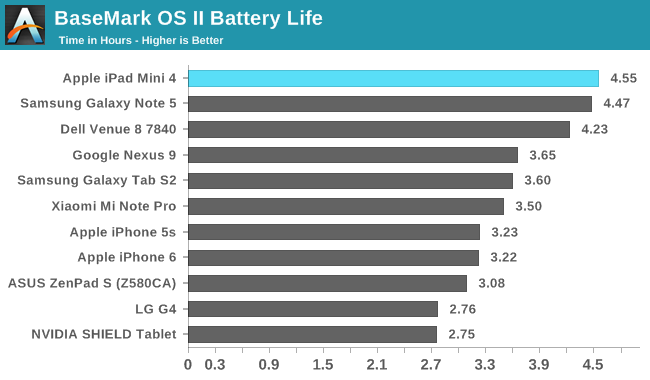 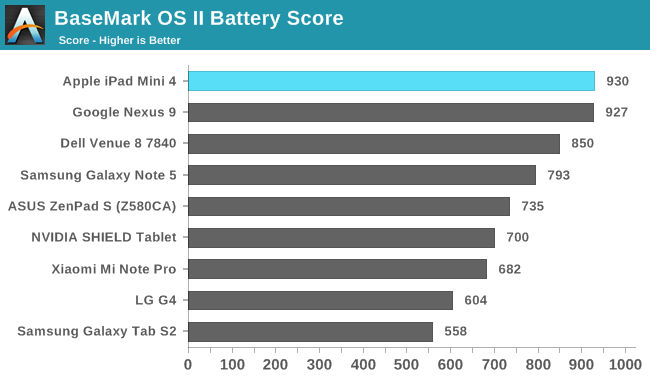 The iPad Mini 4 does exceptionally well in BaseMark OS II's battery test. Not only does it last longer than any other device on record, but it also achieves the highest battery score on record. A simplified description of the battery score is that it's a combination of the device's average battery drain per unit of time, along with consideration given to the device's CPU load during the duration of the test. In the case of the iPad Mini, the amount of throttling occurring was far lower than most other devices, with only the Nexus 9 being close while also lasting an hour shorter. This doesn't bode well for other tablets like the Galaxy Tab S2 which don't last as long and throttle much more heavily during a prolonged CPU load. 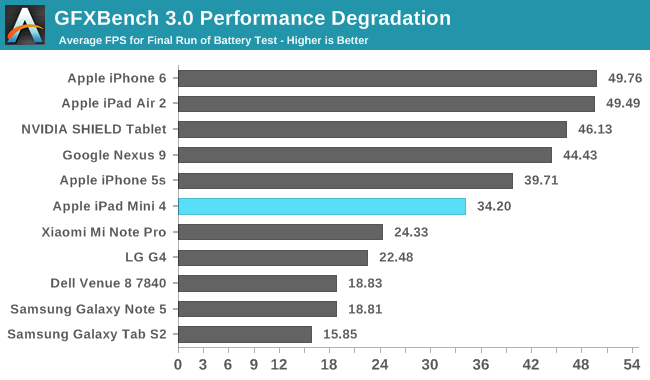 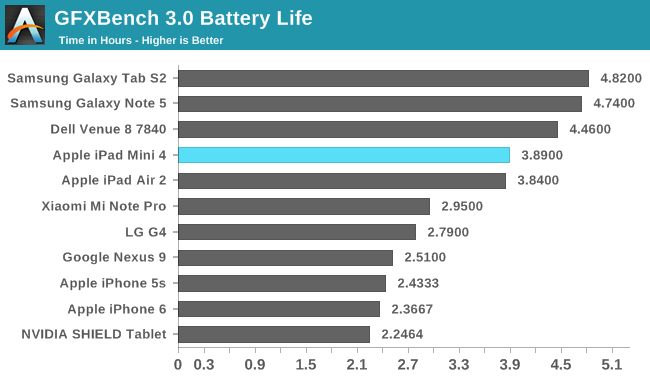 GFXBench's infinite T-Rex HD test is another very strong showing for the Mini 4. It lasts quite a long time, and sustains its performance for the entire duration of the test. This is something that really has to be considered when comparing the performance of Apple's SoCs with the competition, especially when discussing the GPU. For example, both the Tab S2 and Mini 4 achieve similar frame rates if you just run the T-Rex HD test once, but as you can see the Tab S2 actually runs well below 30fps when you continue to run the test, and so with a real game with that level of visual quality the Tab S2 would never be able to produce a playable frame rate.

Apple usually does well in our various battery tests, and the Mini 4 is no exception. Video playback battery life is definitely not as good as full sized tablets or anything using an AMOLED display, but it's still a good result. As for the rest of the tests, the Mini 4 consistently achieves a great battery life combined with great sustained performance, and there's not much more you could ask for from a mini tablet.

The time to charge a tablet is almost always longer than a smartphone, especially now that quick-charging phones charge at a rate as fast or faster than tablets do, while also having significantly smaller batteries. The last few tablets I've looked at have had longer charge times than I had hoped for, but I wasn't really worried about the iPad Mini 4's charge time because it comes with Apple's 12W charger and the iPad Air 2 already had the lowest charge time on record for a full size tablet 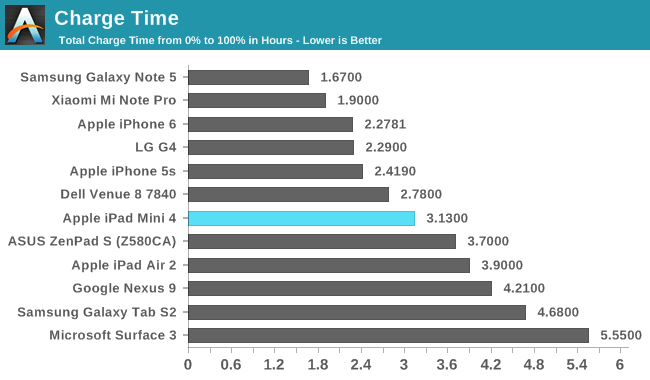 At 3.13 hours to charge, the iPad Mini 4 is second only to the Dell Venue 8 as far as the charge time for tablets is concerned. I actually have to give Dell credit for pushing their charge time so low. While the Mini 4 isn't the fastest tablet on record, 3.13 hours to go from 0% to 100% is still a pretty good result, and in my experience charging it at night every couple of days is more than enough to keep the battery going so I don't expect that it's going to pose an issue for users.