Build-A-Rig Round 2, SilverStone vs Crucial: The $800 PC Build Logs 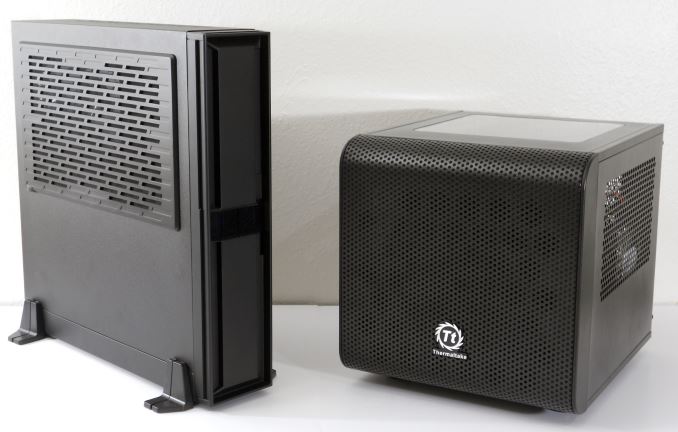 After starting our second Build-A-Rig project a couple of weeks ago the build logs are in and we can see what it is like to work hands on with the hardware selected by SilverStone's Tony Ou and Crucial's Jeremy Mortensen. Build-A-Rig allows us at AnandTech, with the help of Newegg, to create builds with the parts picked by industry members. Aside from a budget and target use case there are no other restrictions on what each company can do with their build.

With parts list in hand we interviewed both Tony and Jeremy, discussed their background and motives for choosing the components they did, and ran a detailed critique of all the components chosen. For our second Build-A-Rig match they were given the objective to build an $800 back to school build. SilverStone shot for a machine that slanted more toward gaming and high quality components while Crucial maintained a more balanced machine with a more potent processor and larger SSD.

Before we go any further let's dig into the build logs and see what it was like to work with the parts chosen.

SilverStone manufactures a wide variety of different PC parts, and they definitely leveraged that here in their Mighty Milo build. 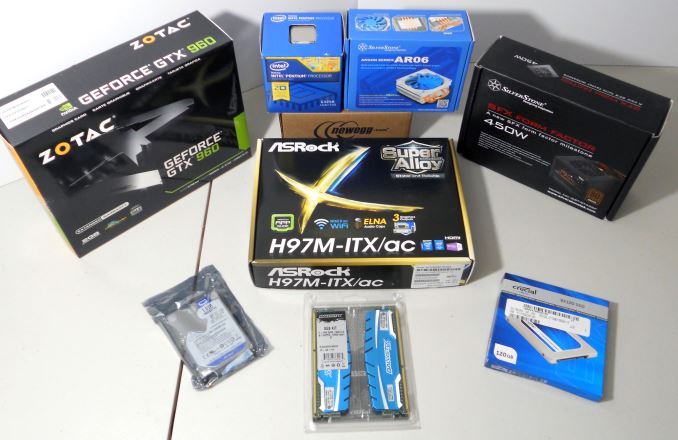 The SilverStone ML08 is a slim mini-ITX case designed to be convenient and portable. It sports two separate compartments that isolate the GPU from the rest of the computer to limit any thermal interference by the hottest components in the system. The case also has wide openings as it lacks any fans actively pulling air in. This opens up the possibility for this machine to be quieter at idle or low load with fewer fans running inside. 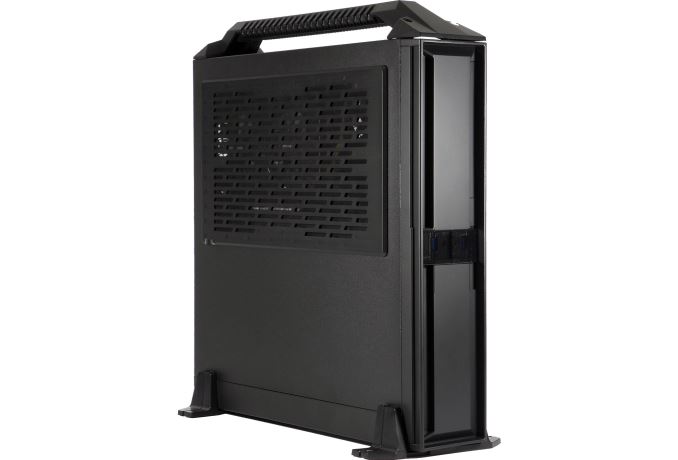 Unfortunately this case has very little tool-less functionality. I have to admit that maybe I've become spoiled in recent years but if feels different now using a screwdriver for everything. Though I can say that the look is improved by not having thumbscrews protruding from the back of the case.

Going into this build I planned on following the included instructions since this was my first time with a Silverstone case and everyone I’ve talked to has told me that SilverStone cases are easy to build in if the instructions are followed. In the end the instructions were helpful to tell me what order to do things but didn't go much more detailed than blow up diagrams of the assembly process. On the other hand without instructions I would have missed installing brackets on the PSU and GPU, which may not be necessary but will help hold the parts in place as it is shipped to the lucky winner. 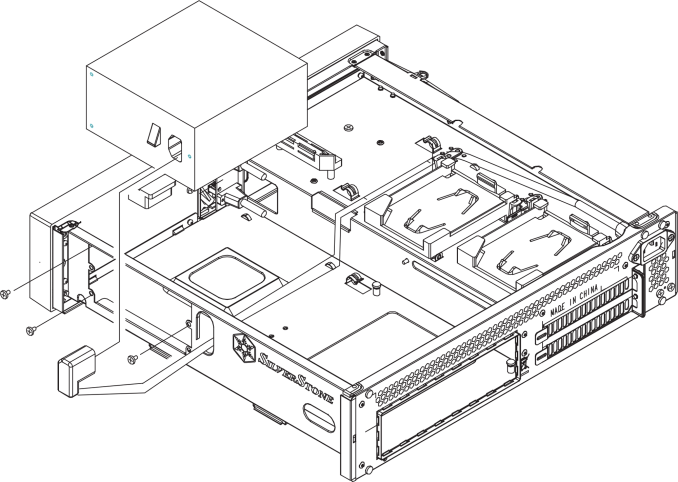 The SilverStone SFX 450w PSU was a bit heavier than I expected as I removed it from the packaging. Another minor surprise was that the case is meant to install a PSU with just three screws instead of one at each corner; two screws on each of the left corners, a single screw on the middle of the right side, which the SilverStone PSU helpfully has a hole for. I of course noticed this in the instructions after seeing the screw holes at the corners not quite lining up together. At this point I could see that cable management will be a bit tight as this PSU has cables long enough for a larger standard case, with the CPU power being the only cable needing to reach more than a few inches when wrapping around the motherboard. 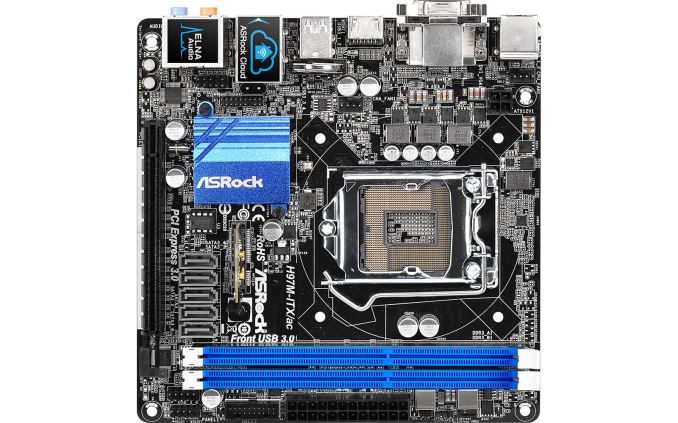 I assembled the motherboard outside of the case to verify everything was in working order before installing it. The Pentium G3258 and Crucial Ballistix Sport XT ram were installed with no issue. The SilverStone Argon AR06 cooler was a little different but not too troublesome. After getting the mounting brackets installed on the heatsink I put thermal grease on the CPU, not realizing it wasn't thermal paste which I am accustomed to, which caused me to put on more of a pea sized portion than the grain of rice sized amount I was aiming for. To mount the cooler I decided to place the cooler on the table fan down and set the motherboard on the cooler to install it. From there fastening the motherboard in a crisscross pattern went as expected, though as there were no back plate, tension screws, or other spacers on this cooler I had to proceed slowly since I didn't want to cause unnecessary flex in the motherboard. Later on temperatures were fine so I likely got a good mount on the first try, but those who have never installed an aftermarket cooler might need to try a few times to get a good mount. 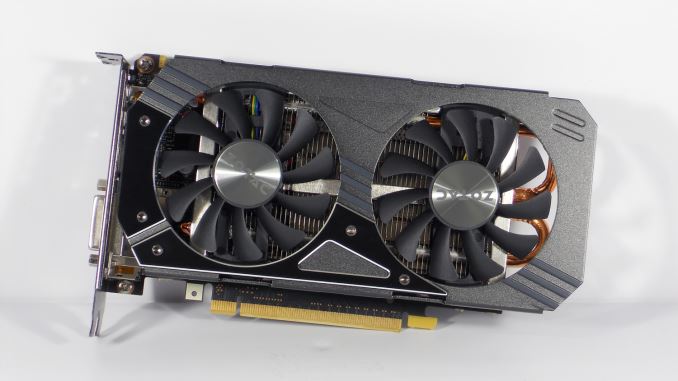 With the motherboard assembled I installed it right next to the PSU. After the motherboard is in there is a PCI-e riser and extension that are used to route the PCI-e slot to the other compartment of the case for the GPU. After screwing the riser into place the Zotac GeForce NVIDIA GTX 960 was installed and the GPU bracket put in place to help keep the card stable in shipping. I felt the instructions for the bracket were a bit unclear and had to test fit a few screws to find one that would hold the bracket to the case properly.  It all worked out and the GTX 960 should hopefully not be going anywhere.

The last steps were to install the Wi-Fi adapter and the storage drives. Here I realized that the Wi-Fi adapter would have been easier to install with the motherboard outside of the case due to the metal bracket that helps to hold the card straight. Luckily I have a good eye for squaring things out and had no trouble screwing the bracket to the card outside of the case and having the other hole line up perfectly after sliding the adapter in. Bonus points go to ASRock here as well, for including a drop of threadlocker on each screw for the Wi-Fi adapter. I'm not sure if it would be needed but extra security is always a good thing. I found running the antennas a little fiddly, those antenna connectors are tiny. After the antennas were connected to the card the other ends were put through the IO shield. I did need to grab a wrench and socket driver here to tighten the antenna connectors into place. For those unaware as I was it is a 5/16" (8mm) socket that I needed to tighten it down.

When installing storage I noticed a minor disappointment. While looking at all of these parts it became obvious to me that Tony made an effort to match a color theme in this build with a blue CPU fan, blue ram, and two blue storage drives. Unfortunately unless I'm missing something the drive sleds want the drives to be installed label down, as Installing the drives label up with the connectors closer to the motherboard will leave part of the ports covered. That being said I eventually got the 120GB Crucial BX100 and 1TB Western digital blue 2.5" drives installed, and when everything is oriented properly installing the drives is a very easy process. 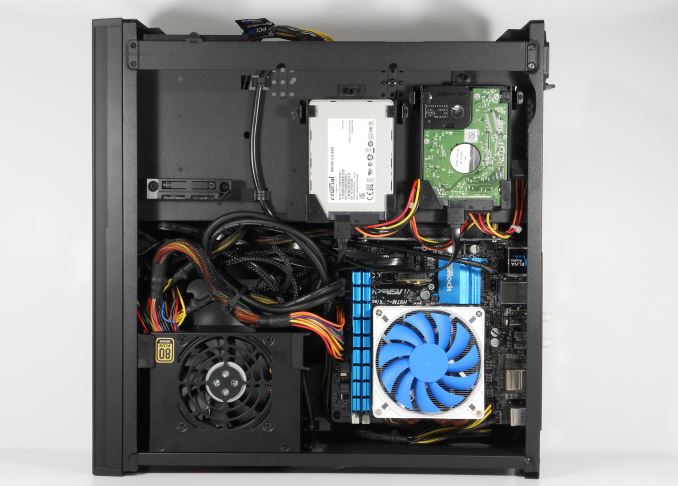 Now that all of the hardware was in place I just had to run cables. I had a few things working against me here, most of them being cables that were much longer than needed. The CPU power cable was pretty much perfect, but the 24 pin hardly even needed to go six inches, and the SATA cables that came with the motherboard were 18 inches long. For context this case is about 14 inches deep.

For the SATA cables I doubled them up and cable tied them to keep them contained. For the PSU cables and front panel connectors my options were to either stuff them next to the PSU and motherboard or snake them through a couple of holes into the other compartment next to the GPU in an effort to use more of their length and hide them out of the way. That latter option would have been much neater but also would have limited future options of either upgrading to a bigger GPU or placing another HDD behind there.  So I decided to take function over form and leave those options open for the future. I did have to use a cable tie in the bundle of wires to hold them down. At first I threw one of my own cable ties in, before realizing there were some six inch ties included in this build that would have worked fine.

Now the Mighty Milo is all together and ready to rock. The build process felt a bit tedious but at the end we have a reasonably compact and portable system that could fit into many different environments. It also should be noted if the less tinker friendly nature of this case wasn't obvious that taking the case panels off requires the removal of the handle. With that finished lets go see how Crucial's Ballistix Bantam is getting along.