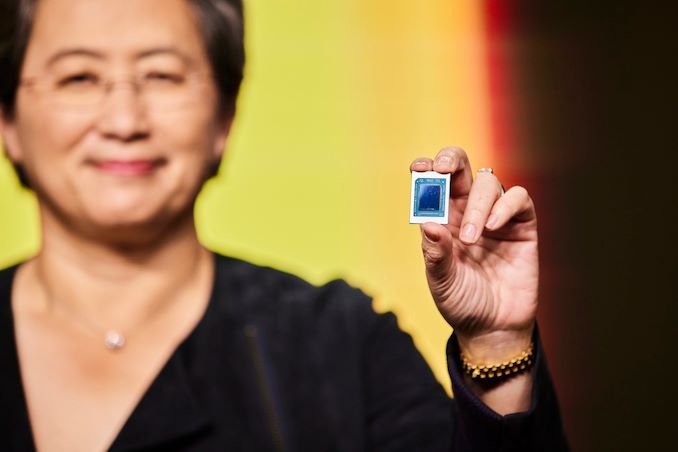 Ahead of tomorrow’s big CES keynote, AMD is offering a spoiler of sorts for one of their product announcements. As it turns out, one of AMD’s forthcoming products, the Ryzen 6000 Series Mobile processor lineup, is receiving a CES innovation award. And since those awards are being announced this evening, ahead of the show, so too is the Ryzen 6000 Mobile series.

While AMD is clearly saving the bulk of the details for tomorrow’s presentation, for this evening they are revealing a few key details. First and foremost, AMD’s latest generation of mobile APUs is getting a significant upgrade in terms of graphics support, with AMD (finally) replacing the Vega GPU architecture with their current-generation RDNA2 GPU architecture. Along with supporting numerous additional graphics features – namely, the DirectX 12 Ultimate feature set – RDNA2 also introduced some significant energy efficiency and computational throughput improvements to AMD’s GPU architecture, which has made AMD’s latest generation of discrete parts among the most competitive in generations.

Curiously, no similar mention is made of the underlying CPU architecture. However, since we’re not expecting Zen 4 until later this year, it stands to reason that these new mobile chips are based around the Zen 3 CPU architecture, just like the current Ryzen 5000 chips.

AMD’s brief announcement also touts support for newer memory standards, specifically “DDR5 technologies.” All of AMD’s current-generation APUs are currently based around DDR4/LPDDR4, so the move to DDR5 will offer a significant boost to total memory bandwidth, something that should pair very well with the increased iGPU capabilities of the Ryzen 6000 Mobile parts. Notably, LPDDR5 isn’t explicitly mentioned alongside DDR5, but this is clearly a less-than-complete detailing of the chips’ architecture.

Finally, the award announcement also confirms that the new Ryzen processors will integrate a Microsoft Pluton-architecture hardware security processor. As well, the chips come with what AMD is calling “AI-audio processing,” which we’ll no doubt hear more about tomorrow.

And with that, we’ll have more tomorrow. Join us at 7am PT (15:00 UTC) for our live blog coverage of AMD’s CES 2022 keynote, where we should hear all about the Ryzen 6000 Mobile series and more.