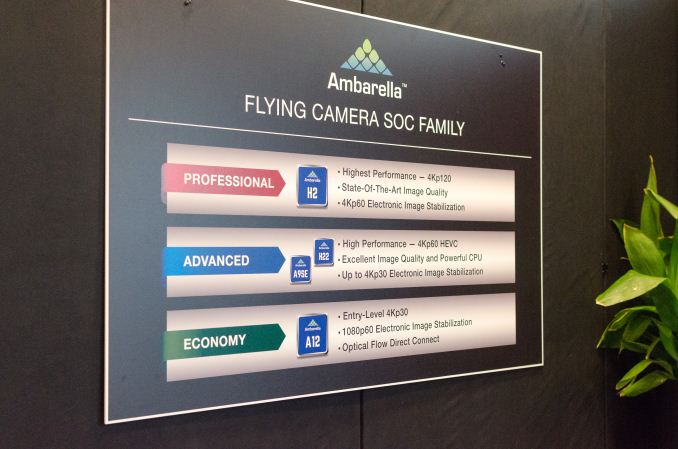 As usual, this year Ambarella had a number of interesting announcements and demos to show off. At a high level, the important announcements for this year are the H3 8K UHD video chip, H22 4K UHD drone/action camera chip, and the A9AQ automotive video chip with B6 serializer/deserializer companion chip that are AEC-Q100 qualified for automotive use. For those that don’t follow Ambarella too closely, the H3 SoC is the successor to the H2 SoC, going from 4K120 capture to 8K30 capture or dual 4K60 capture for things like 360 cameras and includes things like a quad core A53 for computer vision and other compute tasks to avoid a separate chip. EIS is now supported up to 4K60. Like the H2, 10-bit HDR is also available to improve performance. 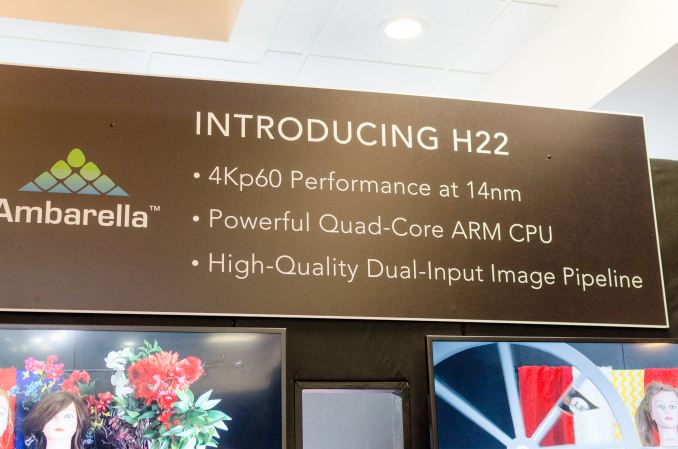 For drones and similar devices that don’t require as much capability in the ISP department, the H22 SoC enables up to 4K60 in HEVC and EIS for 4K video, likely limited to 4K30. Like the H3, it also has a quad core A53 cluster with NEON for compute and similar tasks. For drone applications, it also supports the ability to provide a low latency 1080p output for things like drone racing applications. 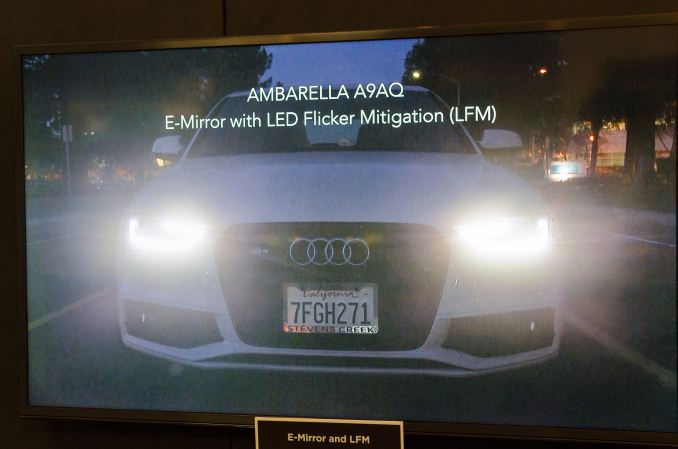 The A9AQ SoC is specifically targeted at automotive applications and allows for three cameras to run off of a single chip which allows for digital rear and side view mirrors in a car and has features like HDR to provide better visibility in low light and high contrast, in addition to LED flicker mitigation to avoid flicker effects from LED streetlights and headlights. This chip also has the ability to stitch together various video feeds to provide a surround view with the cameras. To reduce cost, deserialization has been integrated into the A9AQ and the B6 allows for the parallel output of a camera up to 4K30 to be serialized for simplified implementation. Gentex is said to be using the A9AQ for their automotive rear vision systems so we should be seeing more systems like these in the near future to deal with the horrific rear visibility in modern cars. While not directly related to the A9AQ, it’s also worth noting that Ambarella is being used in OEM dashcam solutions as well which integrate directly into the car and require no setup to begin use unlike third party dashcams. 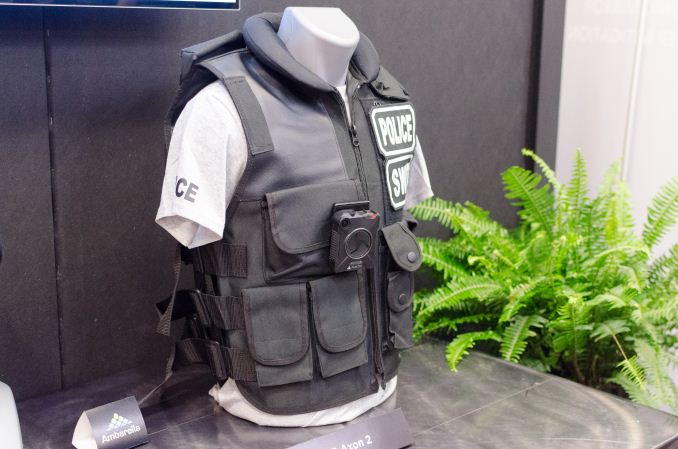 As usual, Ambarella’s booth had a number of interesting demonstrations to show applications of their various SoCs. It’s been found before but the Snapchat Spectacles use Ambarella’s SoCs to enable video capture and other features, and in addition to traditional markets like security cameras and dashcams, Ambarella’s chips are being used in things like police body cameras.

A few of the interesting demos shown for traditional applications were things like object classification and fast camera shutdown for motion detection. In order to enable longer battery life for battery-powered security cameras, Ambarella has updated their software to detect relevant objects like humans and packages when determining whether to continue to record when the motion sensor is activated, which improves idle time as things like swaying trees won’t cause the camera to stay on all the time. This can also be applied to hardwired cameras to do things like intelligent notification for package drop-off and similar applications. 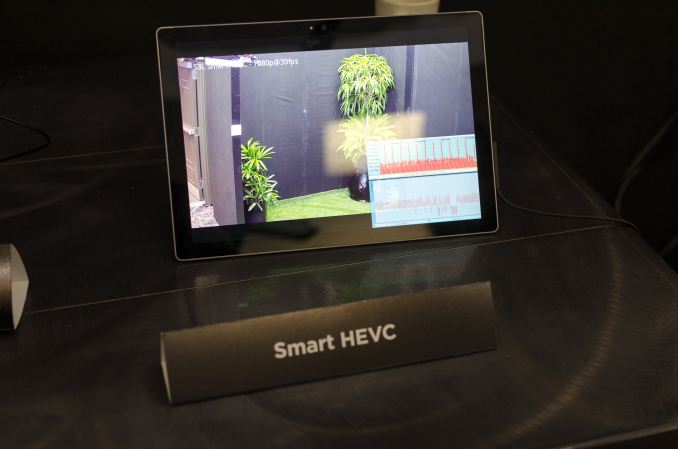 Another interesting demonstration shown for security camera use was dynamic bit rate for HEVC, which helps to reduce storage consumption and Ambarella’s reference design for 360 cameras. These aren’t necessarily the most eye-catching things, but stuff like this helps with getting real products to market that have good user experience. 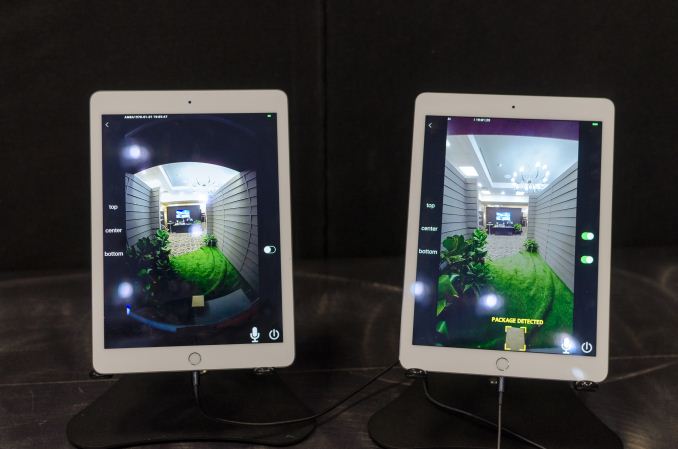 As for eye-catching demos, it’s fairly interesting to see things like LED flicker mitigation in action, as well as comparisons between things like Qualcomm Snapdragon video encode and EIS quality when compared against even something like the Ambarella A9SE which falls somewhere around the mid-range for their line-up. I’ve mentioned my concerns with the Snapdragon 820 video quality before so this probably isn’t a surprise for those that follow such things but it’s rather shocking when you see the difference side by side. 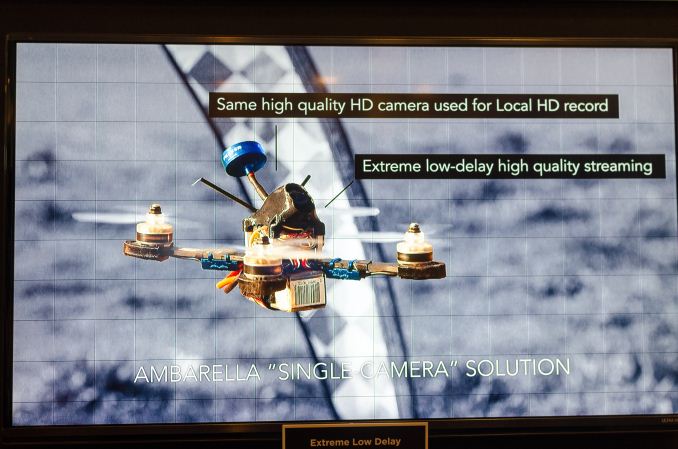 The final demo of note was the ability for Ambarella SoCs to have a direct low-latency digital feed to an external source, which is quite interesting as it seems that things like Connex and DJI’s Lightbridge are in a similar space but I suspect that given that Ambarella is in the business of selling SoCs rather than an end to end solution that they will be able to help enable more open/standard solutions at lower cost here. Latency is said to be below 10ms which should be getting close enough that it’s quite usable. Overall, it looks like a lot of the demos that we saw from last year have finally reached maturity and can begin the process of being integrated into consumer products which is impressive to see.