Earlier this week, the HDMI Forum, the open industry consortium for developing the HDMI specification, officially finalized and released the HDMI 2.1 specification. Previously announced in January HDMI 2.1 is a combination feature update and transport layer update that introduces and expands various bits of functionality, but also enables higher resolutions and refresh rates thanks to a new 48 Gbps cable and associated signaling.

The big news here is of course on the resolution front, where HDMI brings resolution and refresh rate support up to a colossal 10240 x 4320 pixels, or what the HDMI Forum is referring to as “10K,” at 120Hz. Less eye-catching but arguably much more important is support for dynamic HDR, variable refresh, and Enhanced Audio Return Channel (eARC) functionality. The HDMI Forum is also unveiling new features oriented for enhanced refresh rates and low latency. The official publication of the specification brings HDMI 2.1 a significant step closer to powering and connecting commercial devices.

The previously announced HDMI 2.1 specification continues to be very much in line with current monitor and display technology trends: ever higher resolutions at faster refresh rates, variable refresh rate functionality, and high dynamic range (HDR), all needing more and more data bandwidth. At the same time, HDMI 2.1 brings many new features over its predecessors – even over current-generation cables – one of which is dynamic HDR, where the HDR metadata is much more granular and can describe images frame-by-frame. This allows higher quality via per-scene or per-frame adjustments of contrast, brightness, detail, and more, something that is not possible for static HDR due to its same metadata essentially being applied to all the scenes and frames of the title. 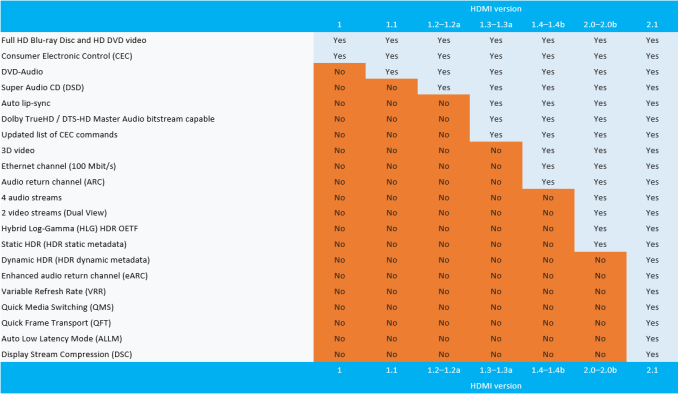 For eARC, the technology itself allows TVs to send audio back to a receiver or sound bar on the single connecting HDMI cable. ARC functionality is not new to HDMI, but the previous version was essentially limited to DVD-quality audio, as there wasn't enough bandwidth for newer audio standards with lossless audio or more channels. Along with enhanced auto-discovery, eARC specifies much more channel bandwidth (~37 Mbps), enabling support for high-bitrate audio formats including DTS Master and Dolby TrueHD, object-based audio including DTS:X and Dolby Atmos, uncompressed 5.1 and 7.1, and 32-channel uncompressed audio.

In real world terms, this is meant to better allow HDMI to work without a dedicated audio receiver. Rather than routing the entire 18 Gbps video + audio stream through a receiver – and all the problems that come from having a device in the chain between a source an a TV – the TV itself can be the hub of a home entertainment system, piping out audio via HDMI to a relatively simple soundbar or similar device. In other words, HDMI becomes TV-centric rather than receiver-centric. Coupled with new eARC device control and discovery capabilities, apps, consoles, set top boxes, Blu-ray players, and other media devices can be plugged directly into a TV and more easily controlled by a single TV remote.

Nevertheless, much still depends on the device manufacturers. eARC can run over some current cables and some manufacturers will be supplying firmware updates to add eARC to current products. However this varies on a product-by-product basis, and not all products can (or will be) updated to support eARC. As a result, the eARC standard will also be backwards compatible, but only inasmuch as it can fallback to ARC. 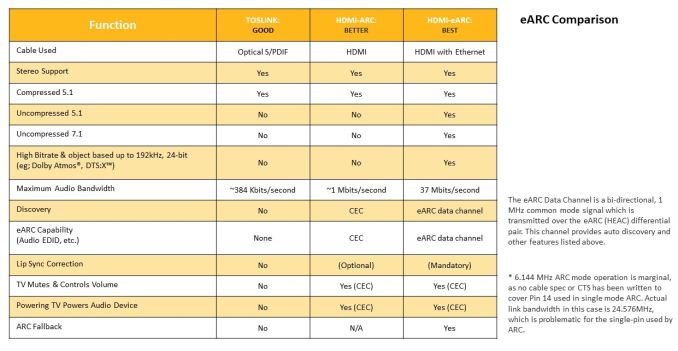 With all the bandwidth that these features consume, the HDMI Forum is continuing on with their 48 Gbps Ultra High Speed HDMI Cable, with its own as-yet unreleased logo and color requirements. Formerly known as the 48G cable, it remains backwards compatible with previous HDMI standards, features low EMI emission, and comes in the existing Type A, C, and D connector flavors. While the specification does not describe cable length, HDMI Licensing considers 2 to 3 meters as the maximum length for passive cables. In addition to passive cables, the specification permits wire, active, and converter Category 3 cable assemblies.

The HDMI Forum expects UHS cables to be available in the first half of 2018, noting that these cables may only ship after complying with the as-yet unreleased HDMI 2.1 Compliance Test Specification. These cables will be necessary to enable the fullest HDMI 2.1 functionality – particularly any feature that requires more bandwidth – such as 4K120 and 8K60 display modes. Chroma and bit depth considerations are also required in determining what class cable is required; HDMI 2.1 supports the latest color spaces like BT.2020 (Rec. 2020) with 10, 12, and 16 bits per color, with higher bit depths quickly eating up cable bandwidth.

Otherwise, there's a bit of good news on the cable front when it comes to eARC. The new audio channel standard doesn't require the UHS cable, but instead works over any cable with an Ethernet channel. This means it's possible for Standard, High Speed, Premium High Speed, and UHS cables to all support eARC. However not all cables (especially older cables) support the Ethernet channel, as it has not been a requirement. 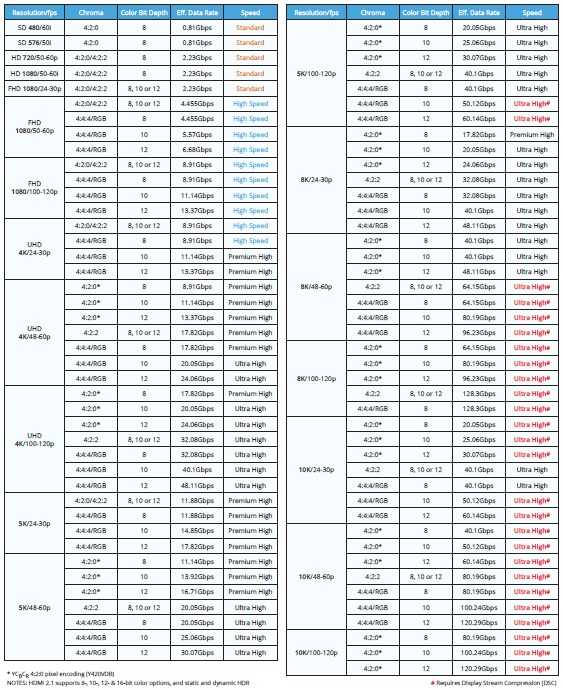 Speaking of cable bandwidth, as even 48 Gbps isn't enough bandwidth for some of the resolutions and refresh rates HDMI 2.1 is meant to enable, the standard also includes support for VESA DSC 1.2a link compression. This is necessary in order to support some resolution modes starting at 5K, where the bandwidth requirements would otherwise range from 50 to 120 Gbps of uncompressed data.

Returning to yesterday’s announcement, the HDMI Forum is also describing a few more refresh rate enhancements to join variable refresh: Quick Media Switching (QMS) and Quick Frame Transport (QFT). The former is focused on videos and movies, allowing source devices to switch resolution or frame rate of the content instantly. The idea is to mitigate potential delays and interruptions when switching between media with different resolutions, refresh rates, or TV viewing modes. In most current products, switching the source signal causes stutter or momentary screen blanking – which although harmless is distracting and has led to poor decisions from manufacturers in the name of seamless interactions (e.g. AppleTV HDR) – so QMS is a more proper solution to the problem. 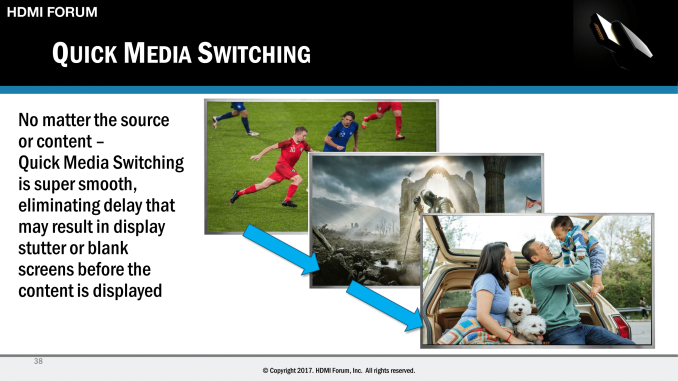 As for QFT, the HDMI Forum described the feature as allowing video frames to transmit faster from the source without increasing the source frame rate. In turn, this aims to reduce latency and screen-tearing in gaming and real-time interactive virtual reality, though the HDMI Forum also points out more responsive karaoke as another use-case. While these capabilities can be combined, the HDMI Forum does reiterate that the HDMI 2.1 featureset is dependent on manufacturer implementations, and that the features need to be enabled on both the source and display.

Adjacent to these refresh rate features is the new Auto Low Latency Mode (ALLM), utilizing what is described as latency mode auto-switching from applications such as movies and videos to low latency applications, e.g. gaming and VR. In other words, ALLM looks at optimizing latency settings for a wide range of applications and recognizing particularly latency sensitive ones. Details were very sparse, but the given description seems to imply some unmentioned drawback or cost, as otherwise low latency settings would be enabled at all times.

In terms of other features, details are vague, which is typical for these types of closed industry standard specifications. And while feature-filled, HDMI 2.1 products will not be available for some time. The HDMI 2.1 Compliance Test Specification is still in development and will be published in stages over the first three quarters of 2018. Given that today’s release does mark a delay from the originally planned Q2 2017 window, it may be until mid-2019 before consumers are able to take advantage of what HDMI 2.1 has to offer – if manufacturers provide them. 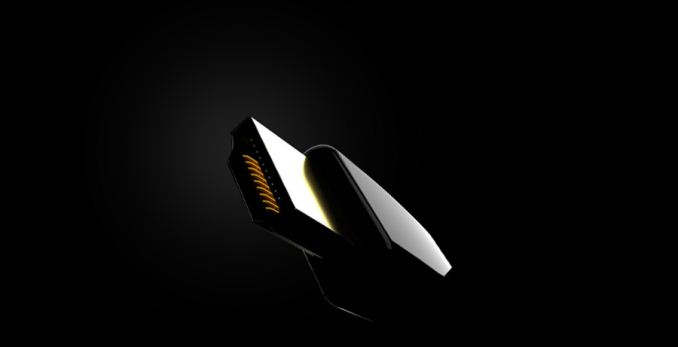 Taken as a whole, the HDMI 2.1 specification has many additional features that complement each other: variable refresh and enhanced refresh rate capabilities in consoles and smart TVs can enable higher resolutions that would otherwise be unplayable or unwatchable, widespread HDR provides ample incentive for more HDR content, and even with all of the myriad modern media devices in the digital living room, eARC can make such a layout – high-end audio included – actually manageable. All these features are done with backwards compatible cables designed to easily co-exist with the current ecosystem. But none of these are mandatory and highly dependent on implementation, so it is up to the manufacturers to work with all the options and translate them into consumer-applicable and accessible products. The flip side is that it's likely these non-mandatory features that are going to be the most useful to consumers; outside of very specific industrial, medical, or commercial uses, 8K resolutions and beyond are not very practical right now due to a lack of content.

For more information, the HDMI Forum has a public slide deck while HDMI Licensing Administrator has an HDMI 2.1 FAQ available. The full specification may be accessed at the Adopter Extranet.