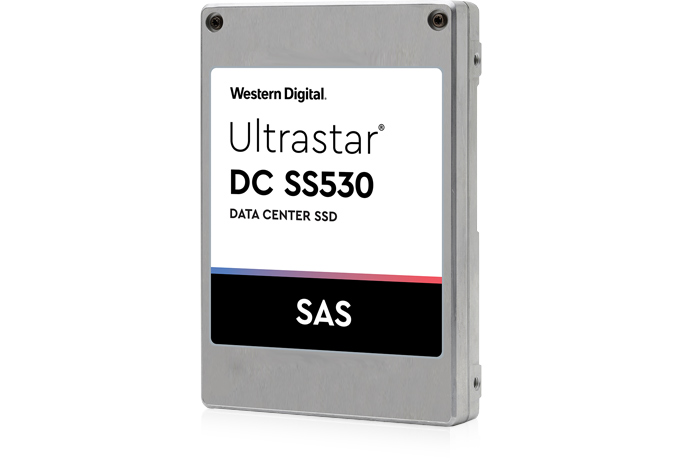 Western Digital has quietly added its new HGST Ultrastar DC SS530-series SSDs to its lineup of products. The new drives are aimed at mission-critical storage applications, such as financial transactions, e-commerce, virtualization, database analytics, etc. that use an SAS interface. The new SSDs carry up to 15.36 TB of user-accessible flash onboard and offer three endurance options to address read-intensive, mixed-use, as well as write-intensive workloads.

The Ultrastar DC SS530 is based on the same proprietary controller architecture as the previous-generation Ultrastar SS300 drives (i.e., the controller was presumably co-designed with Intel), but the new one is based exclusively for second-gen 3D TLC NAND, whereas previously the manufacturer used both 3D TLC and 3D MLC memory. Features of the controllers used for the DC SS530 and the SS300 are similar too and include an extended error correction code (ECC with a 1x10^-17 bit error rate) to enable higher performance and data integrity, exclusive-OR (XOR) parity (in case a whole NAND die fails) as well as parity-checked internal data paths. Besides, the new DC SS530 complies with the T10 Data Integrity Field (DIF) standard, which requires all interconnect buses to have parity protection (on the system level), as well as a special power loss data management feature that does not use supercapacitors.

When it comes to sustained sequential performance, the Ultrastar DC SS530 drives offer up to 2254 MB/s read speeds as well as up to 2223 MB/s write speeds, which is slightly faster when compared to the Ultrastar SS300. Random read performance of all DC SS530 hits 440,000 IOPS, about 10% higher than the predecessor. When it comes to random writes, the SSDs rated for 10 DWPD (drive writes per day) can hit 320,000 IOPS, whereas the high-capacity drives rated for 1 DWPD can hit 100,000 IOPS. Given the fact that the DC SS530 support three power options, end users can choose between higher IOPS performance and lower power consumption (i.e., faster drives consume more energy).

It is noteworthy that within its new Ultrastar DC SS530 family of SSDs Western Digital no longer offers drives rated for less than 1 DWPD, thus addressing only ‘classic’ enterprise applications with various workloads rather than solutions that are extremely read intensive. As for warranty and MTBF, the new SSDs are rated for 2.5 million hours MTBF and are covered with a five-year limited warranty (or the max PB written, whichever occurs first).

Western Digital’s Ultrastar DC SS530 are listed on the company’s website, so chances are that the SSDs are already available to at least some of its customers.