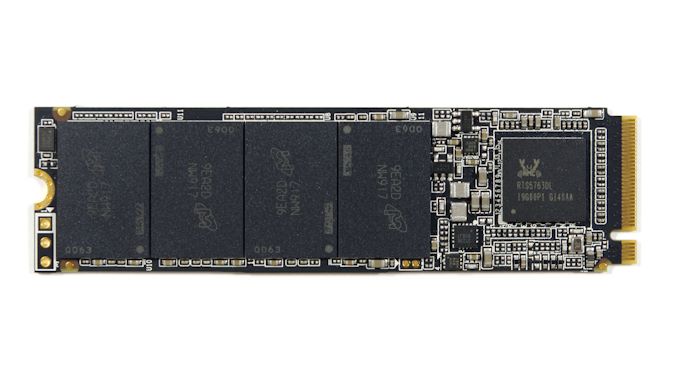 Continuing our dive into newcomer Realtek's SSD controller lineup thanks to several ADATA products, we turn to the ADATA XPG SX6000 Pro, an entry-level NVMe SSD.

As mentioned in our previous SSD review, Realtek is a well-known PC components supplier that is relatively new to the SSD controller business. ADATA has provided Realtek with their most significant SSD design wins, starting with the original SX6000 that used Realtek's very first SSD controller, the RTS5760. The SX6000 Pro targets the same entry-level NVMe market segment, but switches to the second-generation RTS5763DL controller. That newer controller brings a desperately-needed process shrink to enable an upgraded PCIe link and much better performance and power efficiency.

As a late entrant to the SSD market, Realtek is focusing primarily on NVMe rather than SATA. Given that they also prefer to be the low-cost, high-volume alternative rather than pursue high-end niches, the RTS5763DL is probably the most important SSD controller in their current lineup. This controller has a four-channel NAND interface, four PCIe lanes and no DRAM controller, so at a high level it is on par with the Silicon Motion SM2263XT and the upcoming Phison E13T. 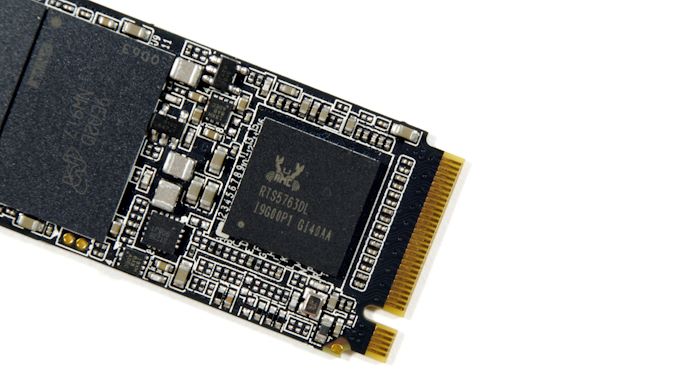 ADATA has paired the Realtek controller with Micron's 64-layer 512Gbit TLC NAND, organized as four packages with four dies each for our 1TB sample, all on one side of the M.2 card thanks to the small size of the controller and the lack of an extra DRAM package. The use of 512Gb instead of 256Gb dies cuts costs slightly, but is usually avoided on high-end drives because having fewer dies limits the degree of parallelism available to the SSD controller. This isn't a problem for the 1TB SX6000 Pro since the four-channel controller is a bigger limitation. Since the 256GB and 512GB models of the SX6000 Pro don't have severely curtailed performance specs, ADATA may have made the smart choice to use the 256Gb dies on at least the smallest model.

For SATA SSDs, the lack of a DRAM cache pretty much always condemns a drive to have extreme low-end performance. For NVMe SSD, going DRAMless doesn't carry such a harsh penalty and entry-level NVMe SSDs usually have no trouble offering better real-world performance than mainstream SATA SSDs with DRAM caches. This is often achieved with the help of the NVMe Host Memory Buffer feature that lets the SSD borrow a chunk of the host system's DRAM (64 MB in the case of this drive) to use as a cache for the drive's internal data structures used for managing the flash memory. However, toggling HMB on and off didn't produce a meaningful performance difference for any of our tests on the SX6000 Pro, which leaves us questioning whether ADATA and Realtek enabled the feature just to check a box on the spec sheet. We can't actually directly observe the drive's use of HMB without a PCIe bus analyzer, but regardless of how (or if) the SX6000 Pro is making use of HMB, the lack of a measurable effect means we're only bothering to graph the results from our test runs with HMB on, which is the default for any recent OS.

As usual, ADATA bundles the SX6000 Pro with a thin heatspreader that the user can apply if desired, which we never do for regular reviews. ADATA is also selling the same drive as the XPG GAMMIX S5, which has a slightly fancier heatsink pre-installed.

We have tested several other entry-level NVMe SSDs that are in direct competition with the SX6000 Pro. The Mushkin Helix-L uses the Silicon Motion SM2263XT controller, another DRAMless 4-channel design with HMB support. The Intel 660p (and the newer 665p) use the SM2263 with DRAM, and use QLC NAND instead of TLC. The Toshiba (now Kioxia) BG4 doesn't currently have a retail version, but it's a popular OEM SSD that likewise is DRAMless.

Phison's entry-level NVMe solutions are missing from this comparison because their E8T controller is pretty old and unpopular at this point, and drives using the successor E13T and E19T controllers haven't quite hit the market. The recently-released WD Blue SN550 adds the 1TB option that the earlier SN500 lacked. These two drives are particularly interesting because they are DRAMless NVMe SSDs that don't use the Host Memory Buffer feature, but our test results from the 250GB SN500 don't really provide a fair comparison against 1TB drives.

As always, it's important to keep an eye on how entry-level NVMe drives perform relative to the more popular high-end models with 8-channel controllers and full-size DRAM caches, because the cheapest high-end drives are usually priced pretty close to entry-level NVMe SSDs. And lastly, representing the SATA SSD market segment, we include the Crucial MX500 as the mainstream choice, and the ADATA Ultimate SU750 featuring Realtek's DRAMless 2-channel SATA controller.