It has been hard to avoid the concept of 5G, and for this year and last year, Qualcomm has used its Snapdragon Tech Summit to showcase where they are for deployment, and what areas are next. In this year’s presentation, Qualcomm stated that there are 40+ operators with some form of 5G enablement globally, and 325+ further operators in 109 countries investing in future 5G deployments. 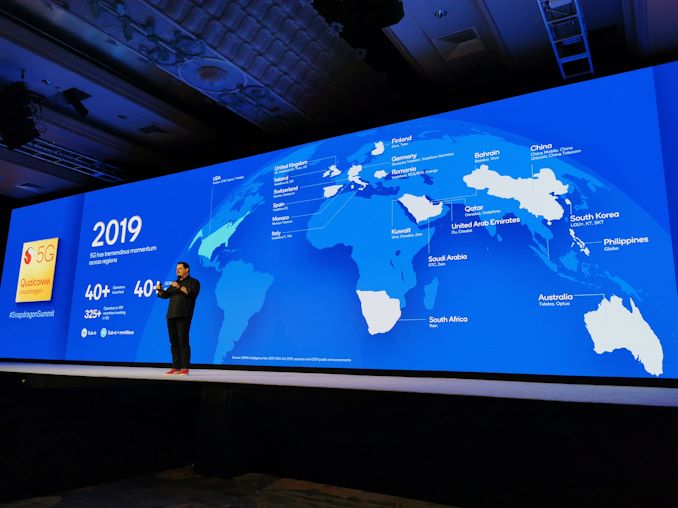 They most talked about areas with some form of 5G are notably Korea, Switzerland, areas of China, and areas of the US. Other countries, like Germany, the UK, Spain, South Africa, Australia, and some of the Middle East, currently have some patchy deployment in major cities are but are looking to expand. In 2020, Qualcomm expects another 14 countries to be 5G enabled, and by 2021 another 30+. Qualcomm also has stated that they expect 2.8 billion (with a b) 5G connections/devices by 2025. It is worth noting that this number isn’t just smartphones, but smart devices and IoT, which will ramp up as the cost of 5G decreases. 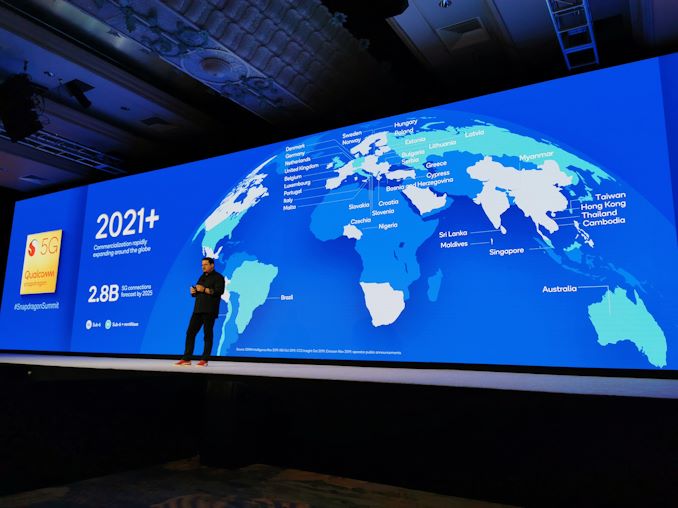 The key aspect to this is that 5G is often talked about in terms of two standards: Millimeter Wave (mmWave) and Sub 6 GHz. Sub 6 GHz is the lower frequency standard that trades range for speed, but can be deployed at current 4G sites, whereas mmWave uses higher frequency that enables higher speeds, but requires adding additional sites to complete coverage. In countries with advanced 4G deployments (LAA), those ‘additional sites’, known as densification to enable capacity, already helps mmWave. This is why some countries are Sub 6 GHz first, while others are mmWave first. Qualcomm’s main messaging today about 5G deployment is that 5G is not one or the other: 5G includes both mmWave and 5G, and Qualcomm wants all of its future hardware to support both.

For example, the USA is the main country that went with mmWave first in 2019. In 2020, Russia and Japan will also start with mmWave. Almost everywhere else is going with Sub 6 GHz deployments first. The first country with both deployed at a wide scale is expected to be South Korea in 2020, with USA having both in certain cities, and then by 2021+ that is expected to expand to areas of Australia, UK, Brazil, Chile, Germany and Italy. 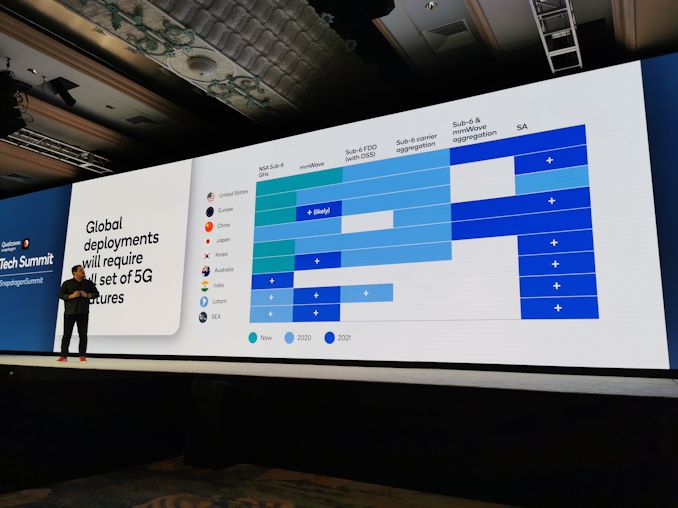 Other features of 5G include Dynamic Spectrum Sharing, or DSS. DSS will be a key part of enabling 5G at current 4G sites, using the same spectrum for both 5G standards and 4G standards such that both types of devices can work in the same spectrum. This means that operators do not need to rearchitect their deployments to split the spectrum, and Qualcomm is expecting some key markets (USA, Europe, China, Korea, Australia) to support DSS in 2020.

When it comes to chipsets, all of Qualcomm’s 2020 smartphone platforms will support both mmWave and Sub 6 GHz, along with DSS support. It will be up to the device manufacturer to actually put the relevant antennas in, however.

Quick Bytes are shortened news pieces about topics mentioned at large press events. Because sometimes smaller announcements get buried at a keynote presentation because a dozen key points are mentioned in one article, and our Quick Bytes series separates out a few topics for targeted discussion.