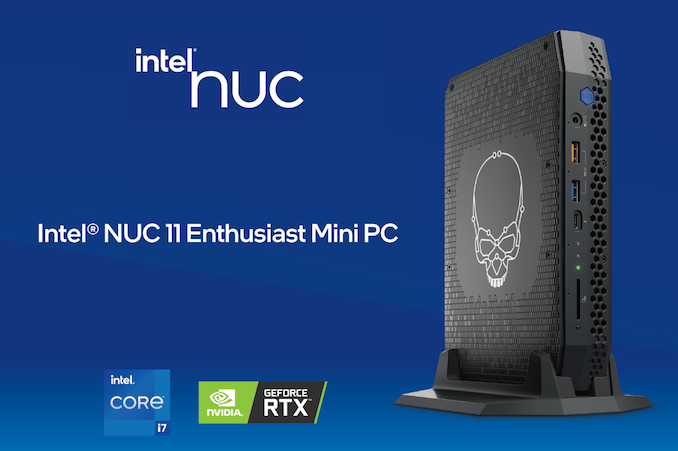 As part of its CES 2021 announcements, Intel officially unveiled a number of NUCs based on their Tiger Lake SoCs. The NUC11 Performance lineup was covered earlier. This piece looks at another exciting NUC11 offering in the enthusiast category. As a refresher, Intel created the NUC Enthusiast category back in 2016 with the introduction of the Skull Canyon NUC (NUC6i7KYK). With a 4" x 5" motherboard, it had a slightly larger footprint compared to the traditional NUCs. However, the increased size allowed the incorporation of a 45W TDP processor with increased graphics flex. The second generation Hades Canyon moved to a slightly larger board (5.5" x 8"), while retaining the industrial design of the Skull Canyon NUC. It used the Kaby Lake-G processors with a Kaby Lake processor and an AMD GPU packaged together (with a total TDP budget between 65W and 100W). For the 3rd generation, Intel has adopted the same board form-factor, but gone in with the traditional way of adding a discrete GPU to a SFF system. The NUC11 Enthusiast (codenamed Phantom Canyon) takes the Tiger Lake-U Core i7-1165G7 and adds a NVIDIA RTX 2060 (based on the Turing architecture) to create a compact system suitable for gaming, streaming, and content creation.

The Phantom Canyon NUC has only two SKUs - the NUC11PHKi7C is the barebones version, while the NUC11PHKi7CAA comes with 2x 8GB DDR4-3200 SODIMMs and an Intel Optane Memory H10 (32GB + 512GB) NVMe drive. The latter also comes with Windows 10 Home pre-installed.

The NUC11 Enthusiast sports a rich set of I/Os. There are two Thunderbolt 4 ports (one in the front and one in the rear) that also carry the display output from the Intel Iris Xe Graphics G7 in the TGL-U processor. Two USB 3.2 Gen 2 Type-A ports and a SDXC UHS-II slot, along with an audio jack and a quad-microphone array round out the front panel. On the rear, we have an audio output jack (supporting TOSLINK), a single 2.5 Gbps LAN port, four USB 3.2 Gen 2 Type-A ports, and the display outputs (HDMI 2.0b and mini-DP 1.4a) from the NVIDIA GeForce RTX 2060. 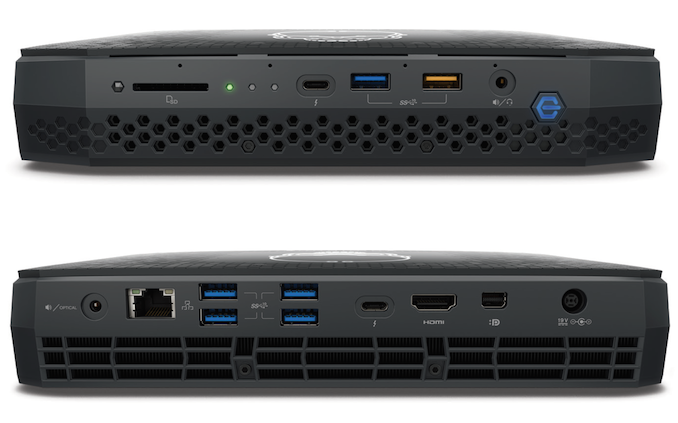 The table below compares the specifications of the flagships in the three generations of enthusiast NUCs. Note that the Skull Canyon and Phantom Canyon NUCs have only one barebones version. Only the Hades Canyon had two different versions - one with the 65W TDP Core i7-8705G, and another with the 100W TDP Core i7-8809G. Another aspect that is not mentioned here is that the Phantom Canyon NUC come with support for vertical orientation (unlike the Hades Canyon NUCs) as shown in the lead image

The block diagram below (sourced from Intel's technical product specifications [PDF]) gives some insights into the design of the system in relation to the I/O capabilities. 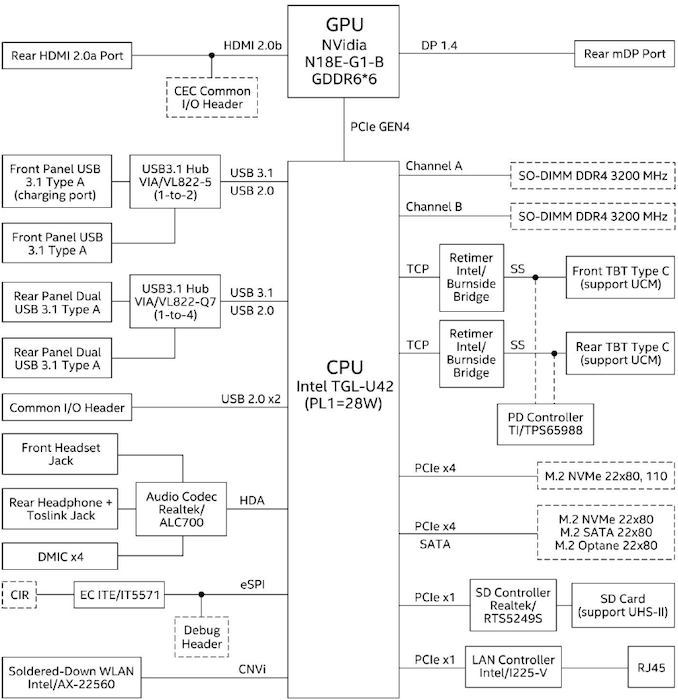 The dGPU is surprisingly connected to the Gen4 x4 PCIe lanes (usually meant for M.2 NVMe storage). Intel indicated that this greatly reduces CPU-GPU communication latency, making it independent of other devices in the system. Other than that, we see the Realtek RTS5249S PCIe to SDXC bridge chip backing up the SDXC UHS-II slot, amd a couple of VIA Technologies VL822 USB 3.2 Gen 2 hub chips enabling the set of USB 3.2 Gen 2 Type-A ports in the system.

Overall, the Phantom Canyon NUC seems like a good step up from Hades Canyon despite the loss of the second wired LAN port. Most importantly, this should just be like a regular gaming notebook from a drivers support perspective. One of the problems with the Hades Canyon NUC was the drivers situation, with Intel and AMD attempting to pass the buck to each other while customers were left with GPU drivers that became flaky after Windows updates. The Phantom Canyon NUC should hopefully always work with the NVIDIA WHQL drivers for Turing GPUs.

SimplyNUC has a 128GB NVMe SSD + 16GB DDR4 SODIMM version priced at $1349. Pre-orders are being accepted for shipment in March. Another re-seller listing has the barebones version for $1130. The latter pricing seems more in line with what one should expect to pay for the internals of a gaming notebook in a SFF PC form-factor. Intel has not provided official pricing or availability information yet.