This week TSMC has disclosed its full quarterly financial results for Q1 2021. In those results the company often explains where the revenue demand is for its technologies, and the financial split the demand brings. This number is not correlated to wafer production (although TSMC provides an overall number too), given that smaller process nodes have a per-wafer premium, but it does indicate where the demand is in the market right now. As perhaps to be expected, 7nm takes top billing, however a couple of interesting numbers come out of the data. 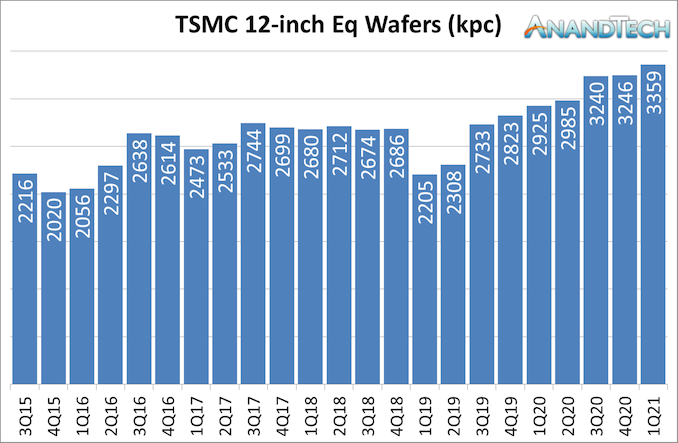 This quarter TSMC has hit record wafer production, some 50% higher than its recent Q1 2019 low point. In Q1 2019, TSMC had low demand for high-end smartphones, low customer demand due to oversupply/inventory digestion, and Q1 is typically lower seasonally anyway. But as we can see from the historical 5-year graph, traditional production for TSMC has been around 2.5-2.7m wafers per quarter.

It is only recently that TSMC is pushing out over 3m wafers per quarter, indicating a good shift in demand as we are seeing of late. This is buoyed by TSMC’s newest Fab 18 facility which went into 5nm risk production in Q2 2019, and at full production is expected to manufacture 1 million to 1.2 million 12-inch wafers per year.

This uptick in wafer shipments has had a net positive in net revenue as well. 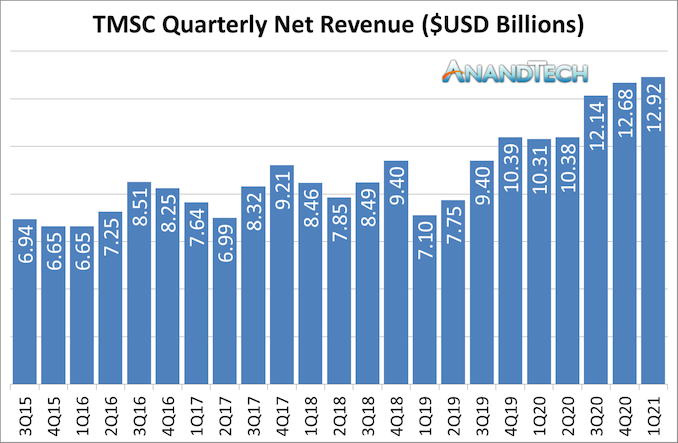 We see a similar dip in revenue as we did with wafers in Q1 2019, but the recent highs from Q3 2020 onwards are set to continue, with TSMC making $12.92 billion USD for Q1 2021 with a 52.4% gross margin. TSMC indicates that the lower gross margin was partly down to a lower level of utilization in its fabs (likely for upgrades/repairs than lack of demand), as well as an unfavourable exchange rate. For perspective, TSMC holds $13.42 billion USD in net cash reserves, down from Q4 due to an increase in short-term loans and issuance of corporate bonds, but has a cash position of $23.47 billion USD.

As for where the revenue comes from, for the second straight quarter, in Q1 2021 7nm and 5nm combined accounted for almost 50% of the company-wide revenue. 7nm actually increased its revenue share, while 5nm revenue reduced. 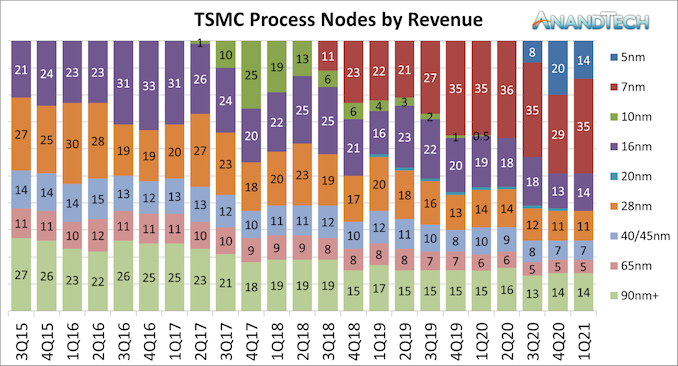 7nm accounts for 35% of all revenue, with 5nm now at 14%. This might seem odd, however TSMC has very few customers with 5nm designs, but plenty for 7nm, suggesting that TSMC is able to have customers bid against each other (along with increasing wafer output). For the last few quarters, reports about TSMC’s 7nm lead time for products, from order to production to shipment, have been extending due to the increased demand. Note that TSMC’s most advanced packaging technologies, such as CoWoS, are typically used in conjunction with 7nm or 16nm silicon, so those revenues are likely in those respective segments as well.

Recently TSMC has stated that it plans to spend $100B over the next three years to increase capacity leading-edge capacity, which includes the $25B-$28B it had already planned for 2021, with $12B of that going onto a factory in Arizona. To put that in perspective, TSMC’s Fab 15 which currently produces 12-inch wafers on 7nm, cost $9.3 billion in 2010, and has the capacity for ~100,000 wafer starts per month.

Revenue from 16nm is decreasing, now going below 15% for a couple of quarters, and showcasing that TSMC is making as much money from 16nm as it is from 5nm and 90nm+ older process nodes.

Also on this breakdown of process nodes, we can see that 20nm has bit the bullet, and now rounds to 0% of TSMC’s revenue. Both 20nm and 10nm are now listed at 0% as companies that produced hardware on these nodes are coming to the end of replacement life cycles for those products.

Demand for the older process nodes is still strong, with 28nm and above being 37% of the company revenue, which combined is more than 7nm revenue. Lots of fundamental electronics still require these process nodes, such as high voltage components, high thermal support/long life cycle hardening, or radio frequency silicon that is mature and low cost. Even TSMC’s interposer technology is manufactured on these process nodes, showcasing that the future is going to be a mix of old and new.

Also on TSMC’s disclosure is revenue by platform. The two major markets here are smartphone (45% by revenue) and high-performance computing (35% by revenue), which have consistently been about 80% of the total revenue for TSMC for over a year. The other 20% is taken up by IoT (9%), Automotive (4%), and others (7%).

Full details can be found on TSMC’s Investor Relations website.